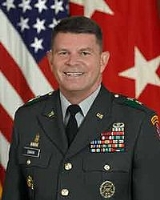 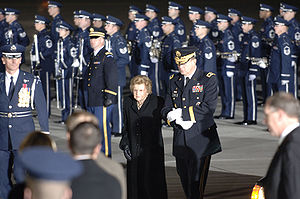 Swan was commissioned as an armor officer from the United States Military Academy
United States Military Academy
The United States Military Academy at West Point is a four-year coeducational federal service academy located at West Point, New York. The academy sits on scenic high ground overlooking the Hudson River, north of New York City...
at West Point, New York
West Point, New York
West Point is a federal military reservation established by President of the United States Thomas Jefferson in 1802. It is a census-designated place located in Town of Highlands in Orange County, New York, United States. The population was 7,138 at the 2000 census...
, in June 1976. After graduation and initial officer training, he served in Korea as a tank platoon leader in the 2nd Infantry Division's 1st Battalion, 72nd Armor. Upon returning to the United States in 1978, he joined the 3rd Armored Cavalry Regiment at Fort Bliss
Fort Bliss
Fort Bliss is a United States Army post in the U.S. states of New Mexico and Texas. With an area of about , it is the Army's second-largest installation behind the adjacent White Sands Missile Range. It is FORSCOM's largest installation, and has the Army's largest Maneuver Area behind the...
, Texas, serving as a cavalry platoon leader, troop executive officer, and squadron adjutant.

Swan then served as the chief, G3 Plans for the 1st Armored Division
1st Armored Division (United States)
The 1st Armored Division—nicknamed "Old Ironsides"—is a standing armored division of the United States Army with base of operations in Fort Bliss, Texas. It was the first armored division of the U.S...
, VII Corps, US Army Europe and Seventh Army in Ansbach, Germany, and later as the division's deputy G3 (Operations) in Kuwait, Saudi Arabia, and Iraq during Operations Desert Shield and Desert Storm
Gulf War
The Persian Gulf War , commonly referred to as simply the Gulf War, was a war waged by a U.N.-authorized coalition force from 34 nations led by the United States, against Iraq in response to Iraq's invasion and annexation of Kuwait.The war is also known under other names, such as the First Gulf...
. In 1991 he returned to the cavalry, joining the 11th Armored Cavalry Regiment (Blackhorse), V Corps, United States Army Europe and Seventh Army where he served as the executive officer of the 1st Squadron in Kuwait during Operation Positive Force, and as the regimental executive officer in Fulda, Germany
Fulda Gap
The Fulda Gap is a region of lower elevation between the former East German border and Frankfurt am Main, Germany. Named for the town of Fulda, the Fulda Gap was strategically important during the Cold War...
.

From June 1996 to June 1998 Swan was the regimental commander for the 2500-soldier 11th Armored Cavalry Regiment (Blackhorse), serving as the 57th colonel of the regiment and as the commander of the Opposing Forces (OPFOR) at the US Army's National Training Center, Fort Irwin, California.

He took up a training mission again, this time as commanding general of the 7th Army Training Command
Grafenwöhr
Grafenwöhr is a town in the district Neustadt , in the region of the Upper Palatinate in eastern Bavaria, Germany. It is widely known for the United States Army military installation and training area, called Grafenwöhr Training Area, located directly south and west of the town.- Early History:The...
(7th ATC), which he led from September 2000 to August 2002 at the Grafenwoehr/Hohenfels Training Area in Upper Bavaria, Germany. In that capacity, he was responsible for supporting the military training readiness of the 65,000 US Army Soldiers based in Europe.