The massive structure on the right bank of the Main, immediately adjacent to Frankfurt's east port (Osthafen), was designed by Martin Elsaesser
Martin Elsaesser
Martin Elsaesser was a German architect and professor of architecture. He is especially well known for the many churches he built...
. It was inaugurated on October 25, 1928. With a length of 220 m, a width of 50 m and a height of 17 to 23 m (722 by 164 by 55 to 75 ft), it was the city's largest architectural unit at the time. It provided 13,000 square metres (140,000 ft2) of space for a total of 130 stalls, most of which served large-scale customers, such as hospitality businesses or retailers. The building, and its surroundings, also hosted offices and storage space for wholesalers, shipping companies and agencies.

From October 1941 onwards, the National Socialists used the Großmarkthalle as a collecting point for the deportation of Jewish men, women and children from Frankfurt and its region. Since 1997, this locally important role within the holocaust is recognised by a commemorative plaque.

The Großmarkthalle, locally known as "Gemieskersch" (Frankfurt Hessian
Hessian dialects
Hessian is a West Central German group of dialects of the German language in the central German state of Hesse. The dialect most similar to Hessian is Palatinate German of the Rhine Franconian sub-family...
for "Gemüsekirche", literally "vegetable church"), has been a listed building since 1984. In 2004, its function was transferred to the "Frischezentrum Frankfurt" in the suburban district of Kalbach-Riedberg
Kalbach-Riedberg (Frankfurt am Main)
Kalbach-Riedberg is a district or Stadtteil and an Ortsbezirk of Frankfurt am Main, Germany. It is subdivided into the Stadtbezirke Kalbach and Riedberg....
, with a total of 128,000 square metres (1,380,000 ft2) of space, including 23,000 square metres (250,000 ft2) for retail purposes.

New use by the European Central Bank 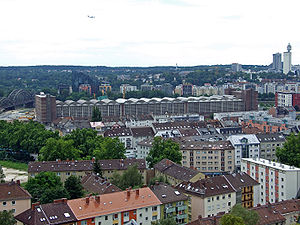 The main part of the hall will be preserved. It will mainly house the public functions of the ECB, such as a visitors' area, the staff restaurant, as well as press and conference spaces. The space between the hall and the Main river will be taken up by the Skytower, a complex of two intertwined 180 m (590 ft) skyscrapers, designed by the Vienna
Vienna
Vienna is the capital and largest city of the Republic of Austria and one of the nine states of Austria. Vienna is Austria's primary city, with a population of about 1.723 million , and is by far the largest city in Austria, as well as its cultural, economic, and political centre...
-based Coop Himmelb(l)au
Coop Himmelb(l)au
Coop Himmelbau is a cooperative architectural design firm primarily located in Vienna, Austria and which now also maintains offices in Los Angeles, United States and Guadalajara, Mexico...
. It is projected for completion in 2011. A memorial for the deported Jews will also be created, in close cooperation with the Jewish Museum Frankfurt
Jewish Museum Frankfurt
The Jewish Museum of the City of Frankfurt am Main covers the history and culture of the Jewish communities in Frankfurt from the 12th to the 20th centuries. There is another branch of the museum, the Museum Judengasse, in a different part of town....
.

In November 2006, the planning committee of Frankfurt accepted a proposal to de-list the so-called annexbauten, two transversal buildings added to the narrow ends of the hall, originally serving clerical and social functions. The local heritage authorities have permitted the demolition of these structures. Furthermore, the western third of the hall's roof, destroyed in World War II and restored thereafter will be cut by a diagonal structure placed partially inside and partially outside the hall so as to "let the building's new function spread beyond its confines".

According to the heirs of the building's architect, Martin Elsaesser (died in 1957), the external appearance of the Großmarkthalle may not be changed according to moral rights, so that the planned alterations would require their agreement until such rights expire 70 years after the death of Elsaesser.
This view may be inaccurate, since it is now known that there is 1932 contract between Elsaesser and the city of Frankfurt that permits alterations to the structure of the hall


Description of the hall 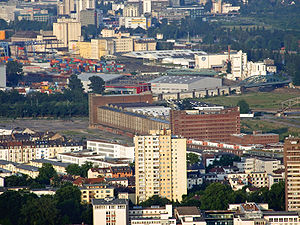 The Großmarkthalle Frankfurt am Main is a massively built hall with a roof freely spanning 50 m (164 ft). At the time of its construction it was the world's widest monocoque
Monocoque
Monocoque is a construction technique that supports structural load by using an object's external skin, as opposed to using an internal frame or truss that is then covered with a non-load-bearing skin or coachwork...
construction. The entirety of the area is roofed by 15 barrel vault
Barrel vault
A barrel vault, also known as a tunnel vault or a wagon vault, is an architectural element formed by the extrusion of a single curve along a given distance. The curves are typically circular in shape, lending a semi-cylindrical appearance to the total design...
s with a support span of 36.9 m (121 ft) and a vault span of 14.1 m (46 ft). The concrete "barrels" (Zeiss-Dywidag barrels) are made of concrete and are only 7 cm (23/4 in) thick. Their basic form is a half ellipse of 6 m (20 ft) height. It was realised between 1926 and 1928 by Franz Dischinger
Franz Dischinger
Franz Dischinger was a pioneering German civil and structural engineer, responsible for the development of the modern cable-stayed bridge...
and Ulrich Finsterwalder. The hall itself was built in only 24 weeks by the companies Dyckerhoff & Widmann (Dywidag) and Wayss & Freytag AG.