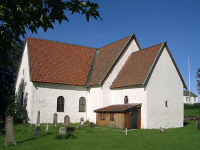 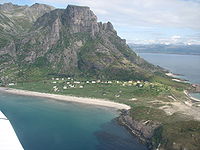 Gildeskål is a municipality
Municipalities of Norway
Norway is divided into 19 administrative regions, called counties , and 430 municipalities...
in Nordland
Nordland
is a county in Norway in the North Norway region, bordering Troms in the north, Nord-Trøndelag in the south, Norrbottens län in Sweden to the east, Västerbottens län to the southeast, and the Atlantic Ocean to the west. The county was formerly known as Nordlandene amt. The county administration is...
county
Counties of Norway
Norway is divided into 19 administrative regions, called counties . The counties form the primary first-level subdivisions of Norway and are further divided into 430 municipalities...
, Norway
Norway
Norway , officially the Kingdom of Norway, is a Nordic unitary constitutional monarchy whose territory comprises the western portion of the Scandinavian Peninsula, Jan Mayen, and the Arctic archipelago of Svalbard and Bouvet Island. Norway has a total area of and a population of about 4.9 million...
. It is part of the Salten
Salten
Salten is a district in Nordland in North Norway, consisting of the municipalities Meløy, Gildeskål, Bodø, Beiarn, Saltdal, Fauske, Sørfold, Steigen and Hamarøy. The district borders Helgeland in the south , Ofoten in the north, Sweden in the east and Vestfjorden in the west...
traditional region
Districts of Norway
The country Norway is historically divided into a number of districts. Many districts have deep historical roots, and only partially coincide with today's administrative units of counties and municipalities. The districts are defined by geographical features, often valleys, mountain ranges, fjords,...
. The administrative centre of the municipality is the village of Inndyr
Inndyr
Inndyr is the administrative centre of Gildeskål municipality, Norway. Its population is about 1000....
. Gildeskål was established as a municipality on 1 January 1838 (see formannskapsdistrikt
Formannskapsdistrikt
Formannskapsdistrikt was the name for a Norwegian local self-government districts put into force in 1838. This system of municipality was created in a bill approved by the Storting and signed into law by King Carl Johan on 14 January 1837...
). Beiarn
Beiarn
Beiarn is a municipality in Nordland county, Norway. It is part of the Salten region and the Bodø Region. The administrative centre of the municipality is the village of Moldjord...
was separated from Gildeskål in 1853. Gildeskål is part of the Bodø Region
Bodø Region
The Bodø Region is a metropolitan region in the county of Nordland in northern Norway, centered on the city of Bodø. Before January 1, 2005, there was also a separate municipality Skjerstad that was merged with Bodø.1/ km²2/ Population per km²...
.

The municipality (originally the parish
Parish
A parish is a territorial unit historically under the pastoral care and clerical jurisdiction of one parish priest, who might be assisted in his pastoral duties by a curate or curates - also priests but not the parish priest - from a more or less central parish church with its associated organization...
) is named after the old Gildeskål farm (Old Norse
Old Norse
Old Norse is a North Germanic language that was spoken by inhabitants of Scandinavia and inhabitants of their overseas settlements during the Viking Age, until about 1300....
: Gildaskáli), since the first church was built there. The first element is the plural
Plural
In linguistics, plurality or [a] plural is a concept of quantity representing a value of more-than-one. Typically applied to nouns, a plural word or marker is used to distinguish a value other than the default quantity of a noun, which is typically one...
genitive case
Genitive case
In grammar, genitive is the grammatical case that marks a noun as modifying another noun...
of gildi which means "feast" or "banquet
Banquet
A banquet is a large meal or feast, complete with main courses and desserts. It usually serves a purpose such as a charitable gathering, a ceremony, or a celebration, and is often preceded or followed by speeches in honour of someone....
" and the last element is skáli which means "hall
Hall
In architecture, a hall is fundamentally a relatively large space enclosed by a roof and walls. In the Iron Age, a mead hall was such a simple building and was the residence of a lord and his retainers...
".

The coat-of-arms
Coat of arms
A coat of arms is a unique heraldic design on a shield or escutcheon or on a surcoat or tabard used to cover and protect armour and to identify the wearer. Thus the term is often stated as "coat-armour", because it was anciently displayed on the front of a coat of cloth...
is from modern times (1988). The arms show a cup which is a canting
Canting arms
Canting arms are heraldic bearings that represent the bearer's name in a visual pun or rebus. The term cant came into the English language from Anglo-Norman cant, meaning song or singing, from Latin cantāre, and English cognates include canticle, chant, accent, incantation and recant.Canting arms –...
of the meaning of the name Gildeskål.

At Gildaskál, there is a VLF-transmitter used for sending messages to submerged submarines ( callsign: JXN, frequency: 16.4 kHz). It uses as antenna multiple wires spun between two mountains http://www.fofo.no/forsvaretsforum.no/Lyd+i+gammel+sender.-mwRLI5D.ips. The transmitter building is at 66°58′58"N 13°52′23"E.
The source of this article is wikipedia, the free encyclopedia.  The text of this article is licensed under the GFDL.