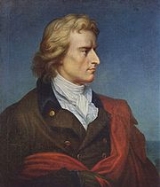 Encyclopedia
Franz Gerhard von Kügelgen (February 26, 1772 – March 27, 1820) was a German
Germans
The Germans are a Germanic ethnic group native to Central Europe. The English term Germans has referred to the German-speaking population of the Holy Roman Empire since the Late Middle Ages....
painter
Painting
Painting is the practice of applying paint, pigment, color or other medium to a surface . The application of the medium is commonly applied to the base with a brush but other objects can be used. In art, the term painting describes both the act and the result of the action. However, painting is...
, noted for his portrait
Portrait
thumb|250px|right|Portrait of [[Thomas Jefferson]] by [[Rembrandt Peale]], 1805. [[New-York Historical Society]].A portrait is a painting, photograph, sculpture, or other artistic representation of a person, in which the face and its expression is predominant. The intent is to display the likeness,...
s and history painting
History painting
History painting is a genre in painting defined by subject matter rather than an artistic style, depicting a moment in a narrative story, rather than a static subject such as a portrait...
s. He was a professor at the Academy of Arts in Dresden
Dresden
Dresden is the capital city of the Free State of Saxony in Germany. It is situated in a valley on the River Elbe, near the Czech border. The Dresden conurbation is part of the Saxon Triangle metropolitan area....
and a member of both the Prussian and Russian Academies of Arts. His twin brother, Karl von Kügelgen
Karl von Kügelgen
Johann Karl Ferdinand von Kügelgen , also known as Carl Ferdinand von Kügelgen was a landscape and history painter, a Russian court and cabinet painter in St. Petersburg, a member of the Royal Russian Academy of Arts in St...
, was also a painter of note.

Gerhard von Kügelgen was born at Bacharach am Rhein. After leaving school in 1789, he studied painting in Koblenz
Koblenz
Koblenz is a German city situated on both banks of the Rhine at its confluence with the Moselle, where the Deutsches Eck and its monument are situated.As Koblenz was one of the military posts established by Drusus about 8 BC, the...
. Beginning in 1791, he worked in Bonn
Bonn
Bonn is the 19th largest city in Germany. Located in the Cologne/Bonn Region, about 25 kilometres south of Cologne on the river Rhine in the State of North Rhine-Westphalia, it was the capital of West Germany from 1949 to 1990 and the official seat of government of united Germany from 1990 to 1999....
, where he painted portraits of Elector Archduke Maximilian Franz of Austria
Archduke Maximilian Franz of Austria
Archduke Maximilian Francis of Austria was an Archbishop-Elector of Cologne, the last child of the Habsburg ruler Maria Theresa and her husband, Francis I, Holy Roman Emperor. His siblings included two Holy Roman Emperors , as well as Queen Marie Antoinette of France and Queen Maria Carolina of...
, minister Ferdinand August von Spiegel zum Desenberg, and the Earl of Waldstein. Afterwards, Gerhard von Kügelgen and his brother undertook an educational journey to Rome, Munich and Riga, which was financed by Maximilian Franz of Habsburg.

In 1800, Kügelgen married Helene Marie Zoege von Manteuffel. They had three children together. His first son, Wilhelm
Wilhelm von Kügelgen
Wilhelm von Kügelgen was a Russian-born German painter.-External links:*...
was born in Saint Petersburg
Saint Petersburg
Saint Petersburg is a city and a federal subject of Russia located on the Neva River at the head of the Gulf of Finland on the Baltic Sea...
in 1802, and also grew up to become a painter. The other children were Gerhard (born 1806), and Adelheid (born 1808). 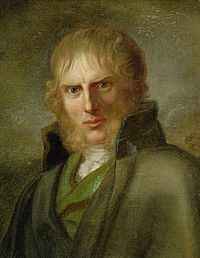 During his career, Gerhard von Kügelgen painted portrait
Portrait
thumb|250px|right|Portrait of [[Thomas Jefferson]] by [[Rembrandt Peale]], 1805. [[New-York Historical Society]].A portrait is a painting, photograph, sculpture, or other artistic representation of a person, in which the face and its expression is predominant. The intent is to display the likeness,...
s of Caspar David Friedrich
Caspar David Friedrich
Caspar David Friedrich was a 19th-century German Romantic landscape painter, generally considered the most important German artist of his generation. He is best known for his mid-period allegorical landscapes which typically feature contemplative figures silhouetted against night skies, morning...
, Johann Wolfgang von Goethe
Johann Wolfgang von Goethe
Johann Wolfgang von Goethe was a German writer, pictorial artist, biologist, theoretical physicist, and polymath. He is considered the supreme genius of modern German literature. His works span the fields of poetry, drama, prose, philosophy, and science. His Faust has been called the greatest long...
, Johann Gottfried Herder
Johann Gottfried Herder
Johann Gottfried von Herder was a German philosopher, theologian, poet, and literary critic. He is associated with the periods of Enlightenment, Sturm und Drang, and Weimar Classicism.-Biography:...
, August von Kotzebue
August von Kotzebue
August Friedrich Ferdinand von Kotzebue was a German dramatist.One of Kotzebue's books was burned during the Wartburg festival in 1817. He was murdered in 1819 by Karl Ludwig Sand, a militant member of the Burschenschaften...
, Friedrich Schiller
Friedrich Schiller
Johann Christoph Friedrich von Schiller was a German poet, philosopher, historian, and playwright. During the last seventeen years of his life , Schiller struck up a productive, if complicated, friendship with already famous and influential Johann Wolfgang von Goethe...
, Johann Gottfried Seume
Johann Gottfried Seume
Johann Gottfried Seume , German author, was born at Poserna .He was educated, first at Borna, then at the Nikolai school and University of Leipzig. The study of Shaftesbury and Bolingbroke wakened his interest in theology, and, breaking off his studies, he set out for Paris...
, Ludwig Uhland
Ludwig Uhland
Johann Ludwig Uhland , was a German poet, philologist and literary historian.-Biography:He was born in Tübingen, then Duchy of Württemberg, and studied jurisprudence at the university there, but also took an interest in medieval literature, especially old German and French poetry...
, Zacharias Werner, Christoph Martin Wieland
Christoph Martin Wieland
Christoph Martin Wieland was a German poet and writer.- Biography :He was born at Oberholzheim , which then belonged to the Free Imperial City of Biberach an der Riss in the south-east of the modern-day state of Baden-Württemberg...
, Johann Carl Simon Morgenstern
Johann Carl Simon Morgenstern
Johann Carl Simon Morgenstern was a Livonian philologist, the first director of the library of the Imperial University of Dorpat. He coined the term Bildungsroman.-Biography:Morgenstern was born in Magdeburg...
and other writers, artists and scholars of his time. After moving to Dresden, Kügelgen's villa "Gottessegen" became a meeting place for artists and adherents of early romanticism
Romanticism
Romanticism was an artistic, literary and intellectual movement that originated in the second half of the 18th century in Europe, and gained strength in reaction to the Industrial Revolution...
. He was also an instructor and friend of Caspar David Friedrich.

In 1820, Kügelgen was killed by a thief while en route from his studio in Loschwitz
Loschwitz
Loschwitz is a borough of Dresden, Germany, incorporated in 1921. It consists of ten quarters :Loschwitz is a villa quarter located at the slopes north of the Elbe river...
to Dresden. He is buried in the Old Catholic Cemetery in Dresden.