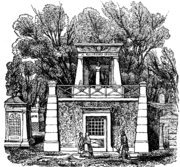 Gaspard Monge
Gaspard Monge
Gaspard Monge, Comte de Péluse was a French mathematician, revolutionary, and was inventor of descriptive geometry. During the French Revolution, he was involved in the complete reorganization of the educational system, founding the École Polytechnique...
, whose remains are deposited in the burying ground in Père Lachaise Cemetery
Père Lachaise Cemetery
Père Lachaise Cemetery is the largest cemetery in the city of Paris, France , though there are larger cemeteries in the city's suburbs.Père Lachaise is in the 20th arrondissement, and is reputed to be the world's most-visited cemetery, attracting hundreds of thousands of visitors annually to the...
, at Paris, in a magnificent mausoleum
Mausoleum
A mausoleum is an external free-standing building constructed as a monument enclosing the interment space or burial chamber of a deceased person or persons. A monument without the interment is a cenotaph. A mausoleum may be considered a type of tomb or the tomb may be considered to be within the...
, was professor of geometry in the École polytechnique
École Polytechnique
The École Polytechnique is a state-run institution of higher education and research in Palaiseau, Essonne, France, near Paris. Polytechnique is renowned for its four year undergraduate/graduate Master's program...
at Paris
Paris
Paris is the capital and largest city in France, situated on the river Seine, in northern France, at the heart of the Île-de-France region...
, and with Denon
Dominique Vivant
Dominique Vivant, Baron de Denon was a French artist, writer, diplomat, author, and archaeologist. He was appointed first director of the Louvre Museum by Napoleon after the Egyptian campaign of 1798-1801.-Biography:...
accompanied Napoleon Bonaparte on his memorable expedition to Egypt
Egypt
Egypt , officially the Arab Republic of Egypt, Arabic: , is a country mainly in North Africa, with the Sinai Peninsula forming a land bridge in Southwest Asia. Egypt is thus a transcontinental country, and a major power in Africa, the Mediterranean Basin, the Middle East and the Muslim world...
; one to make drawings of the architectural antiquities and sculpture, and the other the geographical delineations of that ancient country. He returned to Paris, where he assisted Denon in the publication of his antiquities. At his decease the pupils of the Polytechnique School erected this mausoleum to his memory, as a testimony of their esteem, after a design made by his friend, Monsieur Denon. The mausoleum is of Egyptian architecture, with which Denon had become familiarly acquainted. 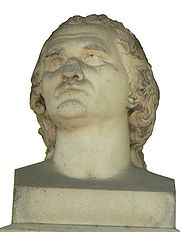 There is a bust of Monge placed on a terminal pedestal underneath a canopy in the upper compartment, which canopy is open in front and in the back. In the crown cavetto of the cornice is an Egyptian winged globe, entwined with serpents, emblematical of time and eternity; and on the faci below is engraved the following line:—

On each side of the upper compartment is inscribed the following memento mori:

Underneath this inscription is carved in sunk work an Egyptian lotus flower in an upright position; on the back of the mausoleum is the year in which Gaspard Monge died. The body is in the cemetery below.