Encyclopedia
G. P. Putnam's Sons was a major United States
United States
The United States of America is a federal constitutional republic comprising fifty states and a federal district...
book publisher based in New York City
New York City
New York is the most populous city in the United States and the center of the New York Metropolitan Area, one of the most populous metropolitan areas in the world. New York exerts a significant impact upon global commerce, finance, media, art, fashion, research, technology, education, and...
, New York
New York
New York is a state in the Northeastern region of the United States. It is the nation's third most populous state. New York is bordered by New Jersey and Pennsylvania to the south, and by Connecticut, Massachusetts and Vermont to the east...
. Since 1996, it has been an imprint of the Penguin Group
Penguin Group
The Penguin Group is a trade book publisher, the largest in the world , having overtaken Random House in 2009. The Penguin Group is the name of the incorporated division of parent Pearson PLC that oversees these publishing operations...
.

In 1841, Putnam went to London, UK
London
London is the capital city of :England and the :United Kingdom, the largest metropolitan area in the United Kingdom, and the largest urban zone in the European Union by most measures. Located on the River Thames, London has been a major settlement for two millennia, its history going back to its...
where he set up a branch office, the first American company ever to do so. In 1848, he returned to New York, where he dissolved the partnership with John Wiley and established G. Putnam Broadway, publishing a variety of works including quality illustrated books. Wiley began John Wiley and Sons, which is still an independent publisher to the present day. 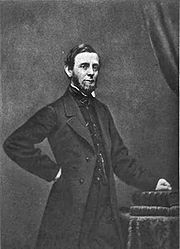 On George Palmer Putnam’s death in 1872 his sons George H.
George Haven Putnam
George Haven Putnam, A.M., Litt.D. was an American soldier, publisher, and author. He married classical scholar Emily James Smith Putnam...
, John
John Bishop Putnam
John Bishop Putnam was treasurer and a director of the venerable book publishing firm founded by his father, G.P. Putnam & Sons. He was born in Staten Island, New York on July 17, 1849 to George Palmer and Mrs. Victorine Haven Putnam, a year after his father founded the firm...
and Irving inherited the business and the firm's name was changed to G. P. Putnam's Sons. Son George H. Putnam became president of the firm, a position he held for the next fifty-two years.

In 1874, the company established its own book printing and manufacturing office
Printer (publisher)
In publishing, printers are both companies providing printing services and individuals who directly operate printing presses. With the invention of the moveable type printing press by Johannes Gutenberg around 1450, printing—and printers—proliferated throughout Europe.Today, printers are found...
, set up by John Putnam and operating initially out of newly leased premises at 182 Fifth Avenue. This printing side of the business later became a separate division called the Knickerbocker Press, and was relocated in 1889 to the Knickerbocker Press Building, built specifically for the press in New Rochelle, New York
New Rochelle, New York
New Rochelle is a city in Westchester County, New York, United States, in the southeastern portion of the state.The town was settled by refugee Huguenots in 1688 who were fleeing persecution in France...
.

On the death of George H. Putnam in 1930, the various Putnam heirs voted to merge the firm with Minton, Balch & Co. who became the majority stockholders. Putnam's son, George P. Putnam
George P. Putnam
George Palmer Putnam was an American publisher, author and explorer. Known for his marriage to and being the widower of Amelia Earhart, he had also achieved fame as one of the most successful promoters in the United States during the 1930s.-Early life:Born in Rye, New York, he was the son of John...
(1887–1950), was married to aviator Amelia Earhart
Amelia Earhart
Amelia Mary Earhart was a noted American aviation pioneer and author. Earhart was the first woman to receive the U.S. Distinguished Flying Cross, awarded for becoming the first aviatrix to fly solo across the Atlantic Ocean...
. Melville Minton, the partner and sales manager of Minton Balch & Co. became acting president and majority stockholder of the firm, until his passing in 1956. In 1936, Putnam acquired the publisher Coward-McCann (later Coward, McCann & Geoghegan), and ran it as an imprint into the 1980s. Upon Melville Minton's death, his son Walter J. Minton took command of Putnam's and brought the company to its lofty heights as one of the countries most respected and controversial publishing houses.

In 1965 G. P. Putnam's Sons acquired Berkley Books
Berkley Books
Berkley Books is an imprint of Penguin Group that began as an independent company in 1955. It was established by Charles Byrne and Frederic Klein, who were working for Avon and formed "Chic News Company". They renamed it Berkley Publishing Co. in 1955. They soon found a niche in science fiction...
, a mass market paperback
Paperback
Paperback, softback or softcover describe and refer to a book by the nature of its binding. The covers of such books are usually made of paper or paperboard, and are usually held together with glue rather than stitches or staples...
publishing house. Ten years later, Putnam Publishing Group and Berkley Publishing Group were sold to MCA, Inc.
Music Corporation of America
MCA, Inc. was an American talent agency. Initially starting in the music business, they would next become a dominant force in the film business, and later expanded into the television business...
In 1982, Putnam acquired the respected children's book publisher, Grosset & Dunlap
Grosset & Dunlap
Grosset & Dunlap is a United States book publisher founded in 1898.The company was purchased by G. P. Putnam's Sons in 1982 and today is part of the British publishing conglomerate, Pearson PLC through its American subsidiary Penguin Group....
.

In 1996 the company was bought by the Penguin Group
Penguin Group
The Penguin Group is a trade book publisher, the largest in the world , having overtaken Random House in 2009. The Penguin Group is the name of the incorporated division of parent Pearson PLC that oversees these publishing operations...
, a division of the British
United Kingdom
The United Kingdom of Great Britain and Northern IrelandIn the United Kingdom and Dependencies, other languages have been officially recognised as legitimate autochthonous languages under the European Charter for Regional or Minority Languages...
publishing conglomerate, Pearson PLC
Pearson PLC
Pearson plc is a global media and education company headquartered in London, United Kingdom. It is both the largest education company and the largest book publisher in the world, with consumer imprints including Penguin, Dorling Kindersley and Ladybird...
. The new owners merged Putnam/Berkley with Penguin USA to form Penguin Putnam Inc., who uses the name to publish the G.P. Putnam's Sons Books for Young Readers.