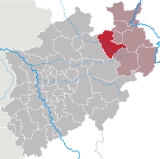 It was created in 1973 in the reorganization of the districts in North Rhine-Westphalia
North Rhine-Westphalia
North Rhine-Westphalia is the most populous state of Germany, with four of the country's ten largest cities. The state was formed in 1946 as a merger of the northern Rhineland and Westphalia, both formerly part of Prussia. Its capital is Düsseldorf. The state is currently run by a coalition of the...
, when the previous districts of Halle and Wiedenbrück were merged. Also the districts Bielefeld, Paderborn
Paderborn (district)
Paderborn is a Kreis in the east of North Rhine-Westphalia, Germany. Neighboring districts are Gütersloh, Lippe, Höxter, Hochsauerland, and Soest.-History:...
, Beckum und Warendorf had to cede parts of their area to the newly formed district. The precursor districts were created in 1816 after the new Prussia
Prussia
Prussia was a German kingdom and historic state originating out of the Duchy of Prussia and the Margraviate of Brandenburg. For centuries, the House of Hohenzollern ruled Prussia, successfully expanding its size by way of an unusually well-organized and effective army. Prussia shaped the history...
n province of Westphalia
Westphalia
Westphalia is a region in Germany, centred on the cities of Arnsberg, Bielefeld, Dortmund, Minden and Münster.Westphalia is roughly the region between the rivers Rhine and Weser, located north and south of the Ruhr River. No exact definition of borders can be given, because the name "Westphalia"...
was established.

Today, the district Gütersloh has one of Germanys largest exile communities of Assyrians
Assyrian people
The Assyrian people are a distinct ethnic group whose origins lie in ancient Mesopotamia...
, also known as Syriacs
Syriacs
Syriac may refer to:* Syriac alphabet* Syriac language* Syriac Christians* Syriac Christianity, the churches using Syriac as their liturgical language* Assyrian/Chaldean/Syriac people, adherents of Syriac Christianity-See also:...
and Chaldeans
Chaldean Christians
Chaldean Christians are ethnic Assyrian adherents of the Chaldean Catholic Church, most of whom entered communion with the Catholic Church from the Church of the East, which was already Catholic, but most wanted to stray away from the Catholic Church, causing the split in the 17th and 18th...
.

The east of the district is covered by the Teutoburg Forest
Teutoburg Forest
The Teutoburg Forest is a range of low, forested mountains in the German states of Lower Saxony and North Rhine-Westphalia which used to be believed to be the scene of a decisive battle in AD 9...
, which also contains the highest elevation of the district, the Hengeberg (316m). In the west there is the source of the Ems river. The Ems valley also contains the lowest point of the district, near Harsewinkel
Harsewinkel
Harsewinkel is a town in Gütersloh District in the state of North Rhine-Westphalia, Germany. It lies on the river Ems, some 15 km north-west of Gütersloh....
with 56m.

Some important companies are located in the district of Guetersloh: