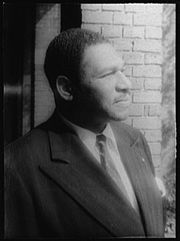 Frederick O'Neal was an American
United States
The United States of America is a federal constitutional republic comprising fifty states and a federal district...
actor
Actor
An actor is a person who acts in a dramatic production and who works in film, television, theatre, or radio in that capacity...
, theater producer and television director
Television director
A television director directs the activities involved in making a television program and is part of a television crew.-Duties:The duties of a television director vary depending on whether the production is live or recorded to video tape or video server .In both types of productions, the...
. He founded the American Negro Theater
American Negro Theater
The American Negro Theater was formed in Harlem on June 5, 1940 by writer Abram Hill and actor Frederick O'Neal. It produced 19 plays before closing in 1949. Designed as a community theater group, performances were held in Harlem's Schomburg Library. In 1942, ANT began its Studio Theatre training...
and was the first African-American president of the Actors' Equity Association
Actors' Equity Association
The Actors' Equity Association , commonly referred to as Actors' Equity or simply Equity, is an American labor union representing the world of live theatrical performance, as opposed to film and television performance. However, performers appearing on live stage productions without a book or...
. He was also known for his work behind the scenes as a revolutionary trade union
Trade union
A trade union, trades union or labor union is an organization of workers that have banded together to achieve common goals such as better working conditions. The trade union, through its leadership, bargains with the employer on behalf of union members and negotiates labour contracts with...
ist.

Born in Brooksville, Mississippi
Brooksville, Mississippi
Brooksville is a town in Noxubee County, Mississippi, United States. The population was 1,182 as of the 2000 census.-Geography:Brooksville is located at ....
, O'Neal made his New York debut in 1936 with the Civic Repertory Theatre. In 1944, he won the Clarence Derwent award for his Broadway performance as the greedy brother-in-law in Anna Lucasta. He also earned acclaim for his stage portrayal of Lem Scott in Take a Giant Step
Take a Giant Step
Take a Giant Step is a coming-of-age drama film, directed by Philip Leacock about a black teenager living in a predominantly white environment and having trouble coping as he reaches an age at which the realities of racism are beginning to affect his life more directly and pointedly than they had...
in 1953. He reprised both roled on film. He was frequently on Kraft Suspense and Hallmark Hall of Fame
Hallmark Hall of Fame
Hallmark Hall of Fame is an anthology program on American television, sponsored by Hallmark Cards, a Kansas City based greeting card company. The second longest-running television program in the history of television, it has a historically long run, beginning in 1951 and continuing into 2011...
productions. He also portrayed Officer Wallace on Car 54 Where Are You? from 1961 to 1963.

Among theater companies which he helped organize were Harlem's American Negro Theatre in 1940, which started the careers of Harry Belafonte
Harry Belafonte
Harold George "Harry" Belafonte, Jr. is an American singer, songwriter, actor and social activist. He was dubbed the "King of Calypso" for popularizing the Caribbean musical style with an international audience in the 1950s...
, Ruby Dee
Ruby Dee
Ruby Dee is an American actress, poet, playwright, screenwriter, journalist, and activist, perhaps best known for co-starring in the film A Raisin in the Sun and the film American Gangster for which she was nominated for an Academy Award for Best Supporting Actress.-Early years:Dee was born Ruby...
, Sidney Poitier
Sidney Poitier
Sir Sidney Poitier, KBE is a Bahamian American actor, film director, author, and diplomat.In 1963, Poitier became the first black person to win an Academy Award for Best Actor for his role in Lilies of the Field...
, among others. O'Neal also co-founded the British Negro Theatre.

In 1964 he became president of the Actors' Equity Association
Actors' Equity Association
The Actors' Equity Association , commonly referred to as Actors' Equity or simply Equity, is an American labor union representing the world of live theatrical performance, as opposed to film and television performance. However, performers appearing on live stage productions without a book or...
and Associated Actors and Artistes of America
Associated Actors and Artistes of America
The Associated Actors and Artistes of America is the federation of trade unions for performing artists in the United States. The following unions belong to the 4As:* The Actors' Equity Association * The American Guild of Musical Artists...
. He was the first African-American president of Equity (1964-1973). His work landed him on the master list of Nixon political opponents
Master list of Nixon political opponents
A master list of Nixon political opponents was compiled to supplement the original Nixon's Enemies List of 20 key people considered opponents of President Richard Nixon. The master list was compiled by Charles Colson's office and sent in memorandum form to John Dean. Dean later provided this...
.
The source of this article is wikipedia, the free encyclopedia.  The text of this article is licensed under the GFDL.