Frederick's younger sister Sophie had married Tsesarevich Paul
Paul I of Russia
Paul I was the Emperor of Russia between 1796 and 1801. He also was the 72nd Prince and Grand Master of the Order of Malta .-Childhood:...
, future Emperor of Russia, in 1776.

A few years later Frederick followed her to Russia. Empress Catherine II
Catherine II of Russia
Catherine II, also known as Catherine the Great , Empress of Russia, was born in Stettin, Pomerania, Prussia on as Sophie Friederike Auguste von Anhalt-Zerbst-Dornburg...
appointed him Governor-General of eastern Finland
Old Finland
thumb|right|260px|The areas that Sweden lost to Russia in the wars of 1721 and 1743Old Finland is a name used for the areas that Russia gained from Sweden in the Great Northern War and in the Russo-Swedish War...
, with his seat at Viipuri.

Frederick had married Duchess Augusta of Brunswick-Wolfenbüttel
Augusta of Brunswick-Wolfenbüttel
Augusta of Brunswick-Wolfenbüttel was a German princess, and first wife of Frederick of Württemberg...
on 15 October 1780 at Braunschweig
Braunschweig
Braunschweig , is a city of 247,400 people, located in the federal-state of Lower Saxony, Germany. It is located north of the Harz mountains at the farthest navigable point of the Oker river, which connects to the North Sea via the rivers Aller and Weser....
. The marriage was not a happy one. Though they had four children, Frederick was rumored to be bisexual
Bisexuality
Bisexuality is sexual behavior or an orientation involving physical or romantic attraction to both males and females, especially with regard to men and women. It is one of the three main classifications of sexual orientation, along with a heterosexual and a homosexual orientation, all a part of the...
, with a coterie of young noblemen.

Frederick was reportedly violent towards his wife, and during a visit to Saint Petersburg
Saint Petersburg
Saint Petersburg is a city and a federal subject of Russia located on the Neva River at the head of the Gulf of Finland on the Baltic Sea...
in December 1786, Augusta asked for protection from Empress Catherine. Catherine gave Augusta asylum and ordered Frederick to leave Russia. When Sophie protested at the treatment of her brother, Catherine replied "It is not I who cover the Prince of Württemberg with opprobrium: on the contrary, it is I who try to bury abominations and it is my duty to suppress any further ones." Augusta died in 1788.

In 1797, Frederick married Princess Charlotte
Charlotte, Princess Royal
The Princess Charlotte, Princess Royal was a member of the British Royal Family, the eldest daughter of George III. She was later the Queen Consort of Frederick of Württemberg...
, daughter of King George III of Great Britain
George III of the United Kingdom
George III was King of Great Britain and King of Ireland from 25 October 1760 until the union of these two countries on 1 January 1801, after which he was King of the United Kingdom of Great Britain and Ireland until his death...
. 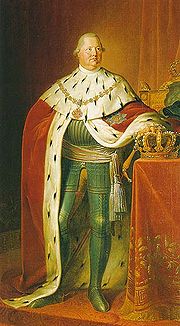 On 22 December 1797, Frederick's father, who had succeeded his brother as Duke of Württemberg two years before, died, and Frederick became Duke of Württemberg as Frederick III. He was not to enjoy his reign undisturbed for long, however. In 1800, the French army occupied Württemberg and the Duke and Duchess fled to Vienna
Vienna
Vienna is the capital and largest city of the Republic of Austria and one of the nine states of Austria. Vienna is Austria's primary city, with a population of about 1.723 million , and is by far the largest city in Austria, as well as its cultural, economic, and political centre...
. In 1801, Duke Frederick ceded the enclave of Montbéliard
Montbéliard
Montbéliard is a city in the Doubs department in the Franche-Comté region in eastern France. It is one of the two subprefectures of the department.-History:...
to the French Republic, and received Ellwangen
Ellwangen
Ellwangen an der Jagst, officially Ellwangen , in common use simply Ellwangen is a town in the district of Ostalbkreis in the east of Baden-Württemberg in Germany...
in exchange two years later.

In the Reichsdeputationshauptschluss, which reorganized the Empire as a result of the French annexation of the west bank of the Rhine, the Duke of Württemberg was raised to the dignity of Imperial Elector
Prince-elector
The Prince-electors of the Holy Roman Empire were the members of the electoral college of the Holy Roman Empire, having the function of electing the Roman king or, from the middle of the 16th century onwards, directly the Holy Roman Emperor.The heir-apparent to a prince-elector was known as an...
. Frederick assumed the title Prince-Elector (Kurfürst) 25 February 1803, and was thereafter known as the Elector of Württemberg. The reorganization of the Empire also secured the new Elector control of various ecclesiastical territories and former free cities, thus greatly increasing the size of his domains.

In exchange for providing France with a large auxiliary force, Napoleon recognized the Elector as King of Württemberg on 26 December 1805. Friedrich became King Frederick I when he formally ascended the throne on 1 January 1806 and was crowned as such on the same day at Stuttgart
Stuttgart
Stuttgart is the capital of the state of Baden-Württemberg in southern Germany. The sixth-largest city in Germany, Stuttgart has a population of 600,038 while the metropolitan area has a population of 5.3 million ....
. Soon after, Württemberg seceded from the Holy Roman Empire
Holy Roman Empire
The Holy Roman Empire was a realm that existed from 962 to 1806 in Central Europe.It was ruled by the Holy Roman Emperor. Its character changed during the Middle Ages and the Early Modern period, when the power of the emperor gradually weakened in favour of the princes...
and joined Napoleon's Confederation of the Rhine
Confederation of the Rhine
The Confederation of the Rhine was a confederation of client states of the First French Empire. It was formed initially from 16 German states by Napoleon after he defeated Austria's Francis II and Russia's Alexander I in the Battle of Austerlitz. The Treaty of Pressburg, in effect, led to the...
. Once again, the assumption of a new title also meant territorial expansion, as the territories of various nearby princes were mediatized
Mediatization
Mediatisation is the loss of imperial immediacy. Broadly defined it is the subsumption of one monarchy into another monarchy in such a way that the ruler of the annexed state keeps his sovereign title and, sometimes, a measure of local power...
and annexed by Württemberg. As a symbol of his alliance with Napoleon, Frederick's daughter Catherine
Catharina of Württemberg
Princess Catharina Frederica of Württemberg was the second wife of Jérôme Bonaparte.-Family:Catharina was born in Saint Petersburg, Russia to the later King Frederick I of Württemberg and Duchess Augusta of Brunswick-Wolfenbüttel...
was married to Napoleon's youngest brother Jerome
Jérôme Bonaparte
Jérôme-Napoléon Bonaparte, French Prince, King of Westphalia, 1st Prince of Montfort was the youngest brother of Napoleon, who made him king of Westphalia...
. The newly elevated king's alliance with France technically made him the enemy of his father-in-law, George III. However, the King's dynastic connections would enable him to act as a go-between Britain and various continental powers.

During the War of Liberation
War of liberation
A War of liberation is a conflict which is primarily intended to bring freedom or independence to a nation or group. Examples might include a war to overthrow a colonial power, or to remove a dictator from power. Such wars are often unconventional...
in 1813, Frederick changed sides and went over to the Allies, where his status as the brother-in-law of the British Prince Regent
George IV of the United Kingdom
George IV was the King of the United Kingdom of Great Britain and Ireland and also of Hanover from the death of his father, George III, on 29 January 1820 until his own death ten years later...
(later George IV) and uncle to the Russian Emperor Alexander I
Alexander I of Russia
Alexander I of Russia , served as Emperor of Russia from 23 March 1801 to 1 December 1825 and the first Russian King of Poland from 1815 to 1825. He was also the first Russian Grand Duke of Finland and Lithuania....
helped his standing. After the fall of Napoleon, he attended the Congress of Vienna
Congress of Vienna
The Congress of Vienna was a conference of ambassadors of European states chaired by Klemens Wenzel von Metternich, and held in Vienna from September, 1814 to June, 1815. The objective of the Congress was to settle the many issues arising from the French Revolutionary Wars, the Napoleonic Wars,...
and was confirmed as King. At Vienna, Frederick and his ministers were very concerned to make sure that Württemberg would be able to retain all the territories it had gained in the past fifteen years. Frederick's harsh treatment of the mediatized princes within his domain made him one of the principal targets of the organization of dispossessed princes, which hoped to gain the support of the Powers in regaining their lost sovereignty. In the end, however, Austria
Habsburg Monarchy
The Habsburg Monarchy covered the territories ruled by the junior Austrian branch of the House of Habsburg , and then by the successor House of Habsburg-Lorraine , between 1526 and 1867/1918. The Imperial capital was Vienna, except from 1583 to 1611, when it was moved to Prague...
, which was seen as the natural ally of the princes, was more interested in alliance with the medium sized German states like Württemberg than with asserting its traditional role as protector of the smaller sovereigns of the old Empire, and Frederick was allowed to retain his dubiously acquired lands. Frederick, along with the other German princes, joined the new Germanic Confederation in 1815. He died in Stuttgart
Stuttgart
Stuttgart is the capital of the state of Baden-Württemberg in southern Germany. The sixth-largest city in Germany, Stuttgart has a population of 600,038 while the metropolitan area has a population of 5.3 million ....
in October of the next year.

He was very tall and obese: behind his back he was known as "The Great Belly-Gerent". Napoleon remarked that God had created the Prince to demonstrate the utmost extent to which the human skin could be stretched without bursting. In return, Frederick wondered how so much poison could fit in such a small head as Napoleon's. 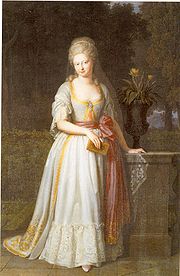 They had four children:


They were separated in 1786. Augusta died in 1788, from complications during the birth of an illegitimate child.

On 18 May 1797, at St. James's Palace
St. James's Palace
St. James's Palace is one of London's oldest palaces. It is situated in Pall Mall, just north of St. James's Park. Although no sovereign has resided there for almost two centuries, it has remained the official residence of the Sovereign and the most senior royal palace in the UK...
in London, he married Charlotte, Princess Royal of Great Britain
Charlotte, Princess Royal
The Princess Charlotte, Princess Royal was a member of the British Royal Family, the eldest daughter of George III. She was later the Queen Consort of Frederick of Württemberg...
, the eldest daughter of King George III and Charlotte of Mecklenburg-Strelitz
Charlotte of Mecklenburg-Strelitz
Charlotte of Mecklenburg-Strelitz was the Queen consort of the United Kingdom as the wife of King George III...
. They had only one child, a stillborn daughter, born and died on 27 April 1798.