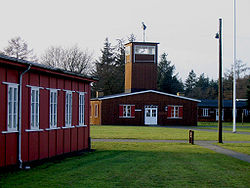 Frøslev Camp was an internment
Internment
Internment is the imprisonment or confinement of people, commonly in large groups, without trial. The Oxford English Dictionary gives the meaning as: "The action of 'interning'; confinement within the limits of a country or place." Most modern usage is about individuals, and there is a distinction...
camp in German
Nazi Germany
Nazi Germany , also known as the Third Reich , but officially called German Reich from 1933 to 1943 and Greater German Reich from 26 June 1943 onward, is the name commonly used to refer to the state of Germany from 1933 to 1945, when it was a totalitarian dictatorship ruled by...
-occupied
Military occupation
Military occupation occurs when the control and authority over a territory passes to a hostile army. The territory then becomes occupied territory.-Military occupation and the laws of war:...
Denmark
Denmark
Denmark is a Scandinavian country in Northern Europe. The countries of Denmark and Greenland, as well as the Faroe Islands, constitute the Kingdom of Denmark . It is the southernmost of the Nordic countries, southwest of Sweden and south of Norway, and bordered to the south by Germany. Denmark...
during World War II
World War II
World War II, or the Second World War , was a global conflict lasting from 1939 to 1945, involving most of the world's nations—including all of the great powers—eventually forming two opposing military alliances: the Allies and the Axis...
.

In order to avoid deportation of Danes to German concentration camps, Danish authorities suggested, in January 1944, that an internment camp be created in Denmark. The German occupation authorities consented, and the camp was erected near the village of Frøslev in the south-west of Denmark, close to the German border. From mid-August until the end of the German occupation in May 1945, 12,000 prisoners passed through the camp's gates. Most of them were suspected members of the Danish resistance movement
Danish resistance movement
The Danish resistance movement was an underground insurgency movement to resist the German occupation of Denmark during World War II. Due to the unusually lenient terms given to Danish people by the Nazi occupation authority, the movement was slower to develop effective tactics on a wide scale...
, Communist
Communism
Communism is a social, political and economic ideology that aims at the establishment of a classless, moneyless, revolutionary and stateless socialist society structured upon common ownership of the means of production...
s and other political prisoner
Political prisoner
According to the Longman Dictionary of Contemporary English, a political prisoner is ‘someone who is in prison because they have opposed or criticized the government of their own country’....
s. Living conditions in the camp were generally tolerable, but 1,600 internees were deported to German concentration camps, where 220 of them died (approximate numbers).

Towards the end of the war, the Swedish count Folke Bernadotte
Folke Bernadotte
Folke Bernadotte, Count of Wisborg was a Swedish diplomat and nobleman noted for his negotiation of the release of about 31,000 prisoners from German concentration camps during World War II, including 450 Danish Jews from Theresienstadt released on 14 April 1945...
tried to get all Scandinavian concentration camp prisoners to Sweden. Simultaneously the Danish administration negotiated with the Germans about rescue of the Danish prisoners in Germany. As a result of these efforts many Scandinavian prisoners came with the white buses from the German camps. In March and April 1945 10,000 Danish and Norwegian captives were brought home from Germany. Some of the returning prisoners came to Frøslev Prison Camp. Among those were some of the 1,960 deported Danish policemen
Deportation of the Danish police
During World War II, the Danish government choose to cooperate with the Nazi occupation force. Even though this applied to the Danish police as well, many were reluctant to cooperate...
, which had been arrested and deported on 19 September 1944.

When the German occupation ended, the prisoners were released, only to be immediately replaced with suspected Nazi collaborators
Collaborationism
Collaborationism is cooperation with enemy forces against one's country. Legally, it may be considered as a form of treason. Collaborationism may be associated with criminal deeds in the service of the occupying power, which may include complicity with the occupying power in murder, persecutions,...
, and the camp's name was changed to Fårhus Camp (Fårhuslejren). The internment camp was now run by the Danish resistance movement, and among those interned was Frits Clausen
Frits Clausen
Frits Clausen was leader of the Danish Nazi party prior to and during World War II.Born in Aabenraa, since 1864 a part of Prussia, Clausen served in the German Army during World War I...
, former leader of the Danish Nazi party. Later on the Danish state would take over from the resistance movement, using the camp as the country's largest correctional facility for convicted collaborators. 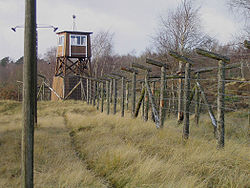 By 1949 most collaborators had served their sentences, and the camp was converted to army barracks under the name of Padborg Camp (Padborglejren). The Frøslev Prison Camp Museum (Frøslevlejrens Museum) was inaugurated in 1969. According to a 2001 agreement, the camp will be preserved as a national memorial park. Some parts of the original 1944–45 prison camp, which had been demolished, have now been reconstructed, including a watchtower and a portion of the barbed-wire fence.