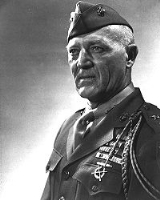 Encyclopedia
The fourragère is a military award, distinguishing military units as a whole, that is shaped as a braided cord. The award has been firstly adopted by France
France
The French Republic , The French Republic , The French Republic , (commonly known as France , is a unitary semi-presidential republic in Western Europe with several overseas territories and islands located on other continents and in the Indian, Pacific, and Atlantic oceans. Metropolitan France...
, followed by other nations such as the Netherlands
Netherlands
The Netherlands is a constituent country of the Kingdom of the Netherlands, located mainly in North-West Europe and with several islands in the Caribbean. Mainland Netherlands borders the North Sea to the north and west, Belgium to the south, and Germany to the east, and shares maritime borders...
, Belgium
Belgium
Belgium , officially the Kingdom of Belgium, is a federal state in Western Europe. It is a founding member of the European Union and hosts the EU's headquarters, and those of several other major international organisations such as NATO.Belgium is also a member of, or affiliated to, many...
and Portugal
Portugal
Portugal , officially the Portuguese Republic is a country situated in southwestern Europe on the Iberian Peninsula. Portugal is the westernmost country of Europe, and is bordered by the Atlantic Ocean to the West and South and by Spain to the North and East. The Atlantic archipelagos of the...
.

As a regimental distinction the fourragère should not be confused with the aiguillette
Aiguillette
An aiguillette is an ornamental braided cord most often worn on uniforms, but may also be observed on other costumes such as academic dress, where it will denote an honour. Originally, the word "aiguillette" referred to the lacing used to fasten plate armor together...
which was introduced by Napoleon I
Napoleon I of France
Napoleon Bonaparte was a French military and political leader during the latter stages of the French Revolution.As Napoleon I, he was Emperor of the French from 1804 to 1815...
and which it closely resembles.

The modern fourragère of the French Army is awarded to all members of military units which have been awarded a mention in despatches. It should not be confused with unit awards of particular decorations, where the medal itself is hung on the flag of the unit. For example, there are many units wearing the fourragère of the médaille militaire
Médaille militaire
The Médaille militaire is a decoration of the French Republic which was first instituted in 1852.-History:The creator of the médaille was the emperor Napoléon III, who may have taken his inspiration in a medal issued by his father, Louis Bonaparte, King of Holland...
, whereas only six units wore the medal on their flags. See also the article dealing with the Croix de guerre
Croix de guerre
The Croix de guerre is a military decoration of France. It was first created in 1915 and consists of a square-cross medal on two crossed swords, hanging from a ribbon with various degree pins. The decoration was awarded during World War I, again in World War II, and in other conflicts...
.

During the First World War
World War I
World War I , which was predominantly called the World War or the Great War from its occurrence until 1939, and the First World War or World War I thereafter, was a major war centred in Europe that began on 28 July 1914 and lasted until 11 November 1918...
, the French Ministry of War first awarded the fourragère to units which had been recorded as distinguishing themselves more than once in the Orders of the Army. There were then six fourragères, depending on the numbers of Mentions in Dispatches awarded to the unit:

If a unit received this distinction in both the First and Second World Wars, its fourragère bears two olives, one for each conflict it earned mentions. These olives are different:


During the Second World War
World War II
World War II, or the Second World War , was a global conflict lasting from 1939 to 1945, involving most of the world's nations—including all of the great powers—eventually forming two opposing military alliances: the Allies and the Axis...
, the medal of the Ordre de la Libération
Ordre de la Libération
The Ordre de la Libération is a French Order awarded to heroes of the Liberation of France during World War II. It is an exceptional honor, the second highest after the Légion d’Honneur and only a small number of people and military units have received it, exclusively for deeds accomplished...
was awarded to the flags of 17 military units, whose members now wear a fourragère since June 18, 1996. This fourragère is considered the top unit award in the French military, as the ordre de la Libération award is seen to be more important than any mention in Dispatches.

Certain French military units wear combinations of fourragères, if they were mentioned in Orders in both one of the World War and an overseas (colonial) war. For example, the famous Foreign Legion
French Foreign Legion
The French Foreign Legion is a unique military service wing of the French Army established in 1831. The foreign legion was exclusively created for foreign nationals willing to serve in the French Armed Forces...
regiment the 3rd Foreign Infantry
3rd Foreign Infantry Regiment
The 3rd Foreign Infantry Regiment is an infantry regiment in the French Foreign Legion. The regiment is stationed in French Guiana, protecting the Centre Spatial Guyanais.-World War I:...
wears a double fourragère red and green with red stripes (9 mentions during World War I), with an olive red with green stripes (3 mentions during World War II) and a fourragère yellow with green stripes, with an olive red and blue (5 mentions during Overseas Wars).

Fourragères used by the French Foreign Legion are:


Personal wear of the fourragère 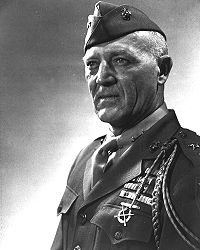 The Military William Order, or often named Military Order of William, is the oldest and highest honour of the Kingdom of the Netherlands
Kingdom of the Netherlands
The Kingdom of the Netherlands is a sovereign state and constitutional monarchy with territory in Western Europe and in the Caribbean. The four parts of the Kingdom—Aruba, Curaçao, the Netherlands, and Sint Maarten—are referred to as "countries", and participate on a basis of equality...
. The Order's motto is Voor Moed, Beleid en Trouw (For Bravery, Leadership
Leadership
Leadership has been described as the “process of social influence in which one person can enlist the aid and support of others in the accomplishment of a common task". Other in-depth definitions of leadership have also emerged.-Theories:...
and Loyalty
Loyalty
Loyalty is faithfulness or a devotion to a person, country, group, or cause There are many aspects to...
). The chivalric order
Order (decoration)
An order or order of merit is a visible honour, awarded by a government, dynastic house or international organization to an individual, usually in recognition of distinguished service to a nation or to humanity. The distinction between orders and decorations is somewhat vague, except that most...
was established on 30 April 1815 by King William I
William I of the Netherlands
William I Frederick, born Willem Frederik Prins van Oranje-Nassau , was a Prince of Orange and the first King of the Netherlands and Grand Duke of Luxembourg....
and was presented for feats of excellent bravery on the battlefield and as a meritorious decoration to senior military officers. Comparable with the French Légion d’Honneur but far less awarded, the Military William Order is a chivalry order of merit open to everyone regardless of rank and nobility, and not only to Dutch military but also foreigners. To date the Order is extremely rarely awarded and only for excellent bravery in battle.

The Belgian fourragère of 1940 was created by Prince Charles of Belgium
Prince Charles of Belgium
Prince Charles, Count of Flanders, Prince of Belgium was the second son of Albert I, King of the Belgians and Duchess Elisabeth in Bavaria. Born in Brussels, he served in lieu of his older brother King Leopold III from 1944 until 1950 as Prince Regent until Leopold could return to Belgium and...
, Regent of the Kingdom to honour certain military formations that distinguished themselves during the Second World War. It consists of three cords terminated by a knot and a metal tag, and is braided in red and green; the colours of the Belgian Croix de Guerre of 1940. The fourragère is in cotton
Cotton
Cotton is a soft, fluffy staple fiber that grows in a boll, or protective capsule, around the seeds of cotton plants of the genus Gossypium. The fiber is almost pure cellulose. The botanical purpose of cotton fiber is to aid in seed dispersal....
for non-commissioned officers and soldiers and in silk
Silk
Silk is a natural protein fiber, some forms of which can be woven into textiles. The best-known type of silk is obtained from the cocoons of the larvae of the mulberry silkworm Bombyx mori reared in captivity...
for officers.

Fourragères are often worn as decorative items to liven up ceremonial uniforms in military, police, and cadet organisations. Members of the United States and Canadian 1st Special Service Force wore a red, white, and blue fourragère made out of parachute shroud lines.
The source of this article is wikipedia, the free encyclopedia.  The text of this article is licensed under the GFDL.