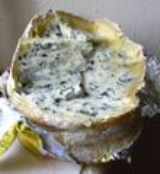 Almost identical to Fourme de Montbrison
Fourme de Montbrison
Fourme de Montbrison is a cow's-milk cheese made in the regions of Rhône-Alpes and Auvergne in southern France. It derives its name from the town of Montbrison in the Loire department....
, the two were protected by the same AOC
Appellation d'Origine Contrôlée
Appellation d’origine contrôlée , which translates as "controlled designation of origin", is the French certification granted to certain French geographical indications for wines, cheeses, butters, and other agricultural products, all under the auspices of the government bureau Institut National...
from 1972 until 2002 when each was recognized as its own cheese with slight differences in manufacture. A likeness of the cheese can be found sculpted above the entrance to a medieval chapel in La Chaulme (Auvergne, France.)

Although most often produced with pasteurized milk by industry and Coopératives, more recently artisanal production has begun using raw milk, and farm or fermier production has now re-started, by the moment, three farmers produce up to 15 tonnes of fourme d'Ambert fermière AOP inevitably made with raw milk.
The source of this article is wikipedia, the free encyclopedia.  The text of this article is licensed under the GFDL.