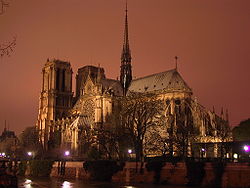 A flèche is used in French architecture
Architecture
Architecture is both the process and product of planning, designing and construction. Architectural works, in the material form of buildings, are often perceived as cultural and political symbols and as works of art...
to refer to a spire
Spire
A spire is a tapering conical or pyramidal structure on the top of a building, particularly a church tower. Etymologically, the word is derived from the Old English word spir, meaning a sprout, shoot, or stalk of grass....
and in English to refer to a lead-covered timber spire, or spirelet. These are placed on the ridges of church or cathedral
Cathedral
A cathedral is a Christian church that contains the seat of a bishop...
roofs and are usually relatively small. However, larger versions can be found on cathedrals such as Amiens Cathedral
Amiens Cathedral
The Cathedral of Our Lady of Amiens , or simply Amiens Cathedral, is a Roman Catholic cathedral and seat of the Bishop of Amiens...
, Notre Dame de Paris
Notre Dame de Paris
Notre Dame de Paris , also known as Notre Dame Cathedral, is a Gothic, Roman Catholic cathedral on the eastern half of the Île de la Cité in the fourth arrondissement of Paris, France. It is the cathedral of the Catholic Archdiocese of Paris: that is, it is the church that contains the cathedra of...
and Coventry Cathedral
Coventry Cathedral
Coventry Cathedral, also known as St Michael's Cathedral, is the seat of the Bishop of Coventry and the Diocese of Coventry, in Coventry, West Midlands, England. The current bishop is the Right Revd Christopher Cocksworth....
.
The highest flèche in the world was built in the end of 19th century for Rouen Cathedral
Rouen Cathedral
Rouen Cathedral is a Roman Catholic Gothic cathedral in Rouen, in northwestern France. It is the seat of the Archbishop of Rouen and Normandy.-History:...
. Its height is 157 metres (515.1 ft).
The source of this article is wikipedia, the free encyclopedia.  The text of this article is licensed under the GFDL.