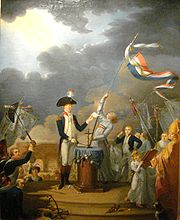 The Fête de la Fédération in Paris was the most prominent event of a series of spontaneous celebrations all over France: from August 1789, Fédérations appeared in towns and countryside; on 5 June 1790, with lots of individual feasts to celebrate the new state of France, a constitutional monarchy. The National Assembly
National Constituent Assembly
The National Constituent Assembly was formed from the National Assembly on 9 July 1789, during the first stages of the French Revolution. It dissolved on 30 September 1791 and was succeeded by the Legislative Assembly.-Background:...
approved the suggestion by the Commune de Paris to organise a "general Federation". Organised late, it was largely an improvisation. The idea was not to contest the legitimacy of the king Louis XVI
Louis XVI of France
Louis XVI was a Bourbon monarch who ruled as King of France and Navarre until 1791, and then as King of the French from 1791 to 1792, before being executed in 1793....
, but to show the general will for stable institutions and a national reconciliation and unity. In the words of Jean Sylvain Bailly, astronomer and mayor of Paris: "We suggest that this meeting (...) be sworn on the next 14 July, which we shall all see as the time of liberty: this day shall be spent swearing to uphold and defend it". Charon, President of the Commune of Paris, stated: "French, we are free! French, we are brothers!".


Preparation of the feast: the "Journée des brouettes"

The event took place on the Champ de Mars
Champ de Mars
The Champ de Mars is a large public greenspace in Paris, France, located in the seventh arrondissement, between the Eiffel Tower to the northwest and the École Militaire to the southeast. The park is named after the Campus Martius in Rome, a tribute to the Roman god of war...
, which was at the time far outside Paris. The place had been transformed on a voluntary basis by the population of Paris itself, in what was recalled as the Journée des brouettes ("Wheelbarrow Day").
Two 400 000 spectator earth steps were built on each side of the field (they remained there until the Second Empire). The Seine
Seine
The Seine is a -long river and an important commercial waterway within the Paris Basin in the north of France. It rises at Saint-Seine near Dijon in northeastern France in the Langres plateau, flowing through Paris and into the English Channel at Le Havre . It is navigable by ocean-going vessels...
was crossed by a bridge of boats leading to an altar where oaths were to be sworn. The new military school was used to harbour members of the National Assembly and their families. At one end of the field, a huge tent was the king's step, and at the other end, a Triumphal Arch
Triumphal arch
A triumphal arch is a monumental structure in the shape of an archway with one or more arched passageways, often designed to span a road. In its simplest form a triumphal arch consists of two massive piers connected by an arch, crowned with a flat entablature or attic on which a statue might be...
was built. At the centre of the field was an altar for the mass. 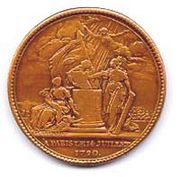 The feast began as early as four in the morning, under a strong rain which would last the whole day (the Journal de Paris had predicted "frequent downpours").

14 000 Federated (Fédérés) came from the province, every single National Guard
National Guard (France)
The National Guard was the name given at the time of the French Revolution to the militias formed in each city, in imitation of the National Guard created in Paris. It was a military force separate from the regular army...
unit having sent two men out of every hundred. They were ranged according to their département under 83 banners. They were brought to the place were the Bastille once stood, and went through Saint-Antoine, Saint-Denis and Saint-Honoré streets before crossing the temporary bridge and arriving at the Champ de Mars. Deputies from other nations, "Swedes, Spaniards, Polacks, Turks, Chaldeans, Greeks, and dwellers in Mesopotamia," representatives of the human race, "with three hundred drummers, twelve hundred wind-musicians, and artillery planted on height after height to boom the tidings all over France, the highest recorded triumph of the Thespian art."

A mass was celebrated by Charles Maurice de Talleyrand, bishop of Autun under the Ancien Régime. The very popular General marquis de La Fayette
Gilbert du Motier, marquis de La Fayette
Marie-Joseph Paul Yves Roch Gilbert du Motier, Marquis de La Fayette , often known as simply Lafayette, was a French aristocrat and military officer born in Chavaniac, in the province of Auvergne in south central France...
, as both captain of the National Guard of Paris and confident of the king, took his oath to the Constitution:
It is noticeable that at this time, the French Constitution of 1791
French Constitution of 1791
The short-lived French Constitution of 1791 was the first written constitution of France. One of the basic precepts of the revolution was adopting constitutionality and establishing popular sovereignty, following the steps of the United States of America...
was not yet written; it would only take effect in September 1791. La Fayette was followed by the President of the National Assembly. Eventually, Louis XVI
Louis XVI of France
Louis XVI was a Bourbon monarch who ruled as King of France and Navarre until 1791, and then as King of the French from 1791 to 1792, before being executed in 1793....
took his oath
The style
Style (manner of address)
A style of office, or honorific, is a legal, official, or recognized title. A style, by tradition or law, precedes a reference to a person who holds a post or political office, and is sometimes used to refer to the office itself. An honorific can also be awarded to an individual in a personal...
"King of the French", used for the first time instead of "King of France (and Navarre)", was an innovation intended to inaugurate a "popular monarchy
Popular monarchy
Popular monarchy is a system of monarchical governance in which the monarch's title is linked with a popular mandate rather than a constitutional state. It was the norm in some places from the Middle Ages, and was occasionally used in 19th- and 20th-century Europe, often reflecting the results of...
" which linked the monarch's title to the people, not to the territory of France.

The Queen
Marie Antoinette
Marie Antoinette ; 2 November 1755 – 16 October 1793) was an Archduchess of Austria and the Queen of France and of Navarre. She was the fifteenth and penultimate child of Holy Roman Empress Maria Theresa and Holy Roman Emperor Francis I....
rose and showed the Dauphin, future Louis XVII
Louis XVII of France
Louis XVII , from birth to 1789 known as Louis-Charles, Duke of Normandy; then from 1789 to 1791 as Louis-Charles, Dauphin of France; and from 1791 to 1793 as Louis-Charles, Prince Royal of France, was the son of King Louis XVI of France and Queen Marie Antoinette...
, saying :
With the permission of the National Assembly, a delegation of the United States of America, led by John Paul Jones
John Paul Jones
John Paul Jones was a Scottish sailor and the United States' first well-known naval fighter in the American Revolutionary War. Although he made enemies among America's political elites, his actions in British waters during the Revolution earned him an international reputation which persists to...
, founder of the US Navy, joined the feast. It also included Thomas Paine
Thomas Paine
Thomas "Tom" Paine was an English author, pamphleteer, radical, inventor, intellectual, revolutionary, and one of the Founding Fathers of the United States...
, James Swan
James Swan
James Swan is a bantamweight boxer from Australia, who represented his native country at two consecutive Summer Olympics, starting in 1996.-References:* *...
, Georges Howell, Benjamin Jarvis, Samuel Blackden, Joel Barlow
Joel Barlow
Joel Barlow was an American poet, diplomat and politician. In his own time, Barlow was well-known for the epic Vision of Columbus. Modern readers may be more familiar with "The Hasty Pudding"...
and William Henry Vernon. The delegation arrived at the Champ de Mars with its flag, the first instance ever of a US flag flown outside of the USA, and was cheered by the people.

In the gardens of the Château de La Muette
Château de la Muette
The Château de la Muette is a château located on the edge of the Bois de Boulogne in Paris, France, near the Porte de la Muette.Three châteaux have been located on the site since a hunting lodge was transformed into the first château for Princess Marguerite de Valois, favorite daughter of King...
, a meal was offered to 22,000, before balls took place. People drank, danced, sang and toasted. The organisation went up to deciding of the price of the filles du Palais-Royal (prostitutes). The feast ended on the 18 July.

In Germany and Italy, the French Revolution was rather well considered by urban bourgeoisie, impregnated with the ideas of the Lumières of the Enlightenment
Age of Enlightenment
The Age of Enlightenment was an elite cultural movement of intellectuals in 18th century Europe that sought to mobilize the power of reason in order to reform society and advance knowledge. It promoted intellectual interchange and opposed intolerance and abuses in church and state...
: Voltaire
Voltaire
François-Marie Arouet , better known by the pen name Voltaire , was a French Enlightenment writer, historian and philosopher famous for his wit and for his advocacy of civil liberties, including freedom of religion, free trade and separation of church and state...
, Rousseau, Montesquieu, D'Alembert and others.