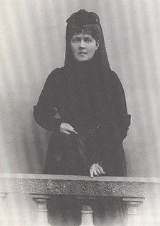 Encyclopedia
Therese Elisabeth Alexandra Förster-Nietzsche (July 10, 1846, Röcken
Röcken
Röcken is a village and a former municipality in the Burgenlandkreis district, in Saxony-Anhalt, Germany. Since 1 July 2009, it has been part of the town Lützen....
, Prussia
Prussia
Prussia was a German kingdom and historic state originating out of the Duchy of Prussia and the Margraviate of Brandenburg. For centuries, the House of Hohenzollern ruled Prussia, successfully expanding its size by way of an unusually well-organized and effective army. Prussia shaped the history...
– November 8, 1935, Weimar
Weimar
Weimar is a city in Germany famous for its cultural heritage. It is located in the federal state of Thuringia , north of the Thüringer Wald, east of Erfurt, and southwest of Halle and Leipzig. Its current population is approximately 65,000. The oldest record of the city dates from the year 899...
, Germany), who went by her second name, was the sister of philosopher Friedrich Nietzsche
Friedrich Nietzsche
Friedrich Wilhelm Nietzsche was a 19th-century German philosopher, poet, composer and classical philologist...
and the creator of the Nietzsche Archive in 1894.

Förster-Nietzsche was two years younger than her brother. Both were children of a Lutheran pastor in the German
Germany
Germany , officially the Federal Republic of Germany , is a federal parliamentary republic in Europe. The country consists of 16 states while the capital and largest city is Berlin. Germany covers an area of 357,021 km2 and has a largely temperate seasonal climate...
village of Röcken bei Lützen. The two children were close during their childhood and early adult years, but grew apart when Elisabeth in 1885 married Bernhard Förster
Bernhard Förster
Bernhard Förster was a nineteenth century German teacher...
, a former high school teacher who had become a fanatic anti-Semitic agitator.

Förster planned to create a "pure" Aryan
Aryan
Aryan is an English language loanword derived from Sanskrit ārya and denoting variously*In scholarly usage:**Indo-Iranian languages *in dated usage:**the Indo-European languages more generally and their speakers...
settlement in the New World
New World
The New World is one of the names used for the Western Hemisphere, specifically America and sometimes Oceania . The term originated in the late 15th century, when America had been recently discovered by European explorers, expanding the geographical horizon of the people of the European middle...
, and had found a site in Paraguay
Paraguay
Paraguay , officially the Republic of Paraguay , is a landlocked country in South America. It is bordered by Argentina to the south and southwest, Brazil to the east and northeast, and Bolivia to the northwest. Paraguay lies on both banks of the Paraguay River, which runs through the center of the...
which he thought would be suitable. The couple persuaded 14 German families to join them in the colony, to be called Nueva Germania
Nueva Germania
Nueva Germania is a district of San Pedro Department in Paraguay. It was founded as a German colony on August 23, 1887 by Bernhard Förster, who was married to Elisabeth Förster-Nietzsche, sister of the German philosopher Friedrich Nietzsche...
, and the group left Germany for South America on February 15, 1887.

The colony did not thrive. The land was not suitable for German methods of farming, illness ran rampant, and transportation to the colony was slow and difficult. Faced with mounting debts, Förster fatally poisoned himself on June 3, 1889. Four years later his widow left the colony forever and returned to Germany. The colony still exists.

Friedrich Nietzsche's mental collapse occurred in 1889 (he died in 1900), and upon Elisabeth's return in 1893 she found him an invalid whose published writings were beginning to be read and discussed throughout Europe. Förster-Nietzsche took a leading role in promoting her brother, especially through the publication of a collection of Nietzsche's fragments under the name of The Will to Power.