Encyclopedia
Ejer Bavnehøj is the third-highest natural point in Denmark
Denmark
Denmark is a Scandinavian country in Northern Europe. The countries of Denmark and Greenland, as well as the Faroe Islands, constitute the Kingdom of Denmark . It is the southernmost of the Nordic countries, southwest of Sweden and south of Norway, and bordered to the south by Germany. Denmark...
(170.35 m). It lies in the southern part of Skanderborg municipality
Skanderborg municipality
Skanderborg Municipality is a municipality in Region Midtjylland on the Jutland peninsula in central Denmark, just southwest of Aarhus and is a part of the Aarhus area...
, between the villages of Riis
Riis
-People:*Asbjørn 'Bear' Riis, Danish professional wrestler*Bjarne Riis , Danish former professional road bicycle racer, now the team owner and manager of Danish UCI ProTour outfit Team CSC*Fredrik Riis , Norwegian county governor...
and Ejer.
At its summit is a 13 m tall tower, built in 1924, commemorating the reunion of the south of Jutland
Jutland
Jutland , historically also called Cimbria, is the name of the peninsula that juts out in Northern Europe toward the rest of Scandinavia, forming the mainland part of Denmark. It has the North Sea to its west, Kattegat and Skagerrak to its north, the Baltic Sea to its east, and the Danish–German...
with the rest of Denmark after the First World War
World War I
World War I , which was predominantly called the World War or the Great War from its occurrence until 1939, and the First World War or World War I thereafter, was a major war centred in Europe that began on 28 July 1914 and lasted until 11 November 1918...
.

Close to Ejer Bavnehøj lies Yding Skovhøj
Yding Skovhøj
Yding Skovhøj in Horsens municipality, Jutland is one of Denmark's highest points. Its height is 172.54 m above sea level when the height of one of the Bronze Age burial mounds built on the top of the hill is included...
, another high point, with a height of 172.66 m above sea level but this includes a human built Bronze Age
Bronze Age
The Bronze Age is a period characterized by the use of copper and its alloy bronze as the chief hard materials in the manufacture of some implements and weapons. Chronologically, it stands between the Stone Age and Iron Age...
burial mound. Without the Bronze Age mound Yding Skovhøj is a little lower than Denmark's highest non-man-made point, Møllehøj
Møllehøj
Møllehøj is the highest natural point in Denmark at . It is in the Ejerbjerge hills in Skanderborg municipality, very close to Ejer Bavnehøj. The summit is marked with a millstone, a remnant of Ejer mill which was situated on the hill from 1838 to 1917...
, which is 170.86 m high, 51 cm higher than Ejer Bavnehøj.

Historically Ejer Bavnehøj was mostly known as a site for a beacon where signal-fires were lit in order to warn the military and local population if the enemy were on the way. Ejer means owner. The second part of the name, "Bavnehøj", can literally be translated into Bavne meaning Beacon and Høj from the Old Norse
Old Norse
Old Norse is a North Germanic language that was spoken by inhabitants of Scandinavia and inhabitants of their overseas settlements during the Viking Age, until about 1300....
word haugr meaning hill. 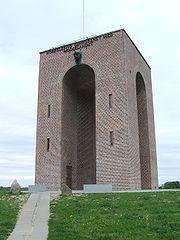