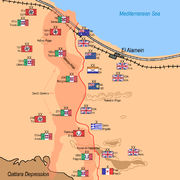 The Devil's gardens was the name given by Erwin Rommel
Erwin Rommel
Erwin Johannes Eugen Rommel , popularly known as the Desert Fox , was a German Field Marshal of World War II. He won the respect of both his own troops and the enemies he fought....
, commander of the German Afrika Korps
Afrika Korps
The German Africa Corps , or the Afrika Korps as it was popularly called, was the German expeditionary force in Libya and Tunisia during the North African Campaign of World War II...
during World War II
World War II
World War II, or the Second World War , was a global conflict lasting from 1939 to 1945, involving most of the world's nations—including all of the great powers—eventually forming two opposing military alliances: the Allies and the Axis...
, to the defensive entanglements of land mine
Land mine
A land mine is usually a weight-triggered explosive device which is intended to damage a target—either human or inanimate—by means of a blast and/or fragment impact....
s and barbed wire
Wire obstacle
In the military science of fortification, wire obstacles are defensive obstacles made from barbed wire, barbed tape or concertina wire. They are designed to disrupt, delay and generally slow down an attacking enemy...
protecting his positions during the Second Battle of El Alamein
Second Battle of El Alamein
The Second Battle of El Alamein marked a major turning point in the Western Desert Campaign of the Second World War. The battle took place over 20 days from 23 October – 11 November 1942. The First Battle of El Alamein had stalled the Axis advance. Thereafter, Lieutenant-General Bernard Montgomery...
in late 1942. The defences strech from the Mediterranean coast to the Qattara Depression
Qattara Depression
The Qattara Depression is a depression in the north west of Egypt in the Matruh Governorate and is part of the Libyan Desert. It lies below sea level and is covered with salt pans, sand dunes and salt marshes. The region extends between latitudes of 28°35' and 30°25' North and longitudes of 26°20'...
.

During the 'break-in' phase of the battle, British commander Lieutenant General Bernard Montgomery
Bernard Montgomery, 1st Viscount Montgomery of Alamein
Field Marshal Bernard Law Montgomery, 1st Viscount Montgomery of Alamein, KG, GCB, DSO, PC , nicknamed "Monty" and the "Spartan General" was a British Army officer. He saw action in the First World War, when he was seriously wounded, and during the Second World War he commanded the 8th Army from...
planned for engineer troops supporting infantry brigades of 2nd New Zealand Division to clear lanes through the minefields along which attacking formations would pass into the Axis positions. Engineers using hand tools were supplemented by Scorpion tanks
Mine flail
A mine flail is a vehicle-mounted device that makes a safe path through a mine-field by deliberately detonating land mines in front of the vehicle that carries it. They were first used by the British during World War II....
equipped with rotating flails to explode anti-vehicle mines. These did not work as well as had been hoped and manual methods of clearing had to be resorted to. This would have been more difficult, had the minefields not been sown with relatively few anti-personnel mines.

An estimated 3 million mines were laid before the battle, most of which remain in position to this day, becoming more unstable as the years pass and injuring local people who use the area.
The source of this article is wikipedia, the free encyclopedia.  The text of this article is licensed under the GFDL.