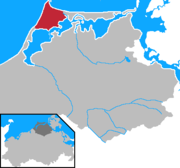 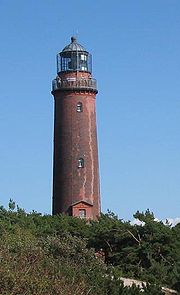 The Darß is the middle part of the peninsula of Fischland-Darß-Zingst
Fischland-Darß-Zingst
Fischland-Darß-Zingst is a peninsula on the coast of Mecklenburg-Vorpommern in Germany. Its full length is 45 km. The three parts of the peninsula, from west to east, are Fischland, Darß and Zingst....
on the southern shore of the Baltic Sea
Baltic Sea
The Baltic Sea is a brackish mediterranean sea located in Northern Europe, from 53°N to 66°N latitude and from 20°E to 26°E longitude. It is bounded by the Scandinavian Peninsula, the mainland of Europe, and the Danish islands. It drains into the Kattegat by way of the Øresund, the Great Belt and...
in the German
Germany
Germany , officially the Federal Republic of Germany , is a federal parliamentary republic in Europe. The country consists of 16 states while the capital and largest city is Berlin. Germany covers an area of 357,021 km2 and has a largely temperate seasonal climate...
state of Mecklenburg-Western Pomerania
Mecklenburg-Western Pomerania
Mecklenburg-Vorpommern is a federal state in northern Germany. The capital city is Schwerin...
. The peninsula's name comes from the names of the three regions making up the peninsula. There is a large forest in the Darß. In recent times, the name "Darß" has also been used to refer to the entire peninsula.

The Darß is famous for being a resting place for tens of thousands of migrating crane
Crane (bird)
Cranes are a family, Gruidae, of large, long-legged and long-necked birds in the order Gruiformes. There are fifteen species of crane in four genera. Unlike the similar-looking but unrelated herons, cranes fly with necks outstretched, not pulled back...
s and geese
Goose
The word goose is the English name for a group of waterfowl, belonging to the family Anatidae. This family also includes swans, most of which are larger than true geese, and ducks, which are smaller....
. Tourism has long been a source of income and has increased since German reunification
German reunification
German reunification was the process in 1990 in which the German Democratic Republic joined the Federal Republic of Germany , and when Berlin reunited into a single city, as provided by its then Grundgesetz constitution Article 23. The start of this process is commonly referred by Germans as die...
, but the Darß is still far from being a crowded tourist place.