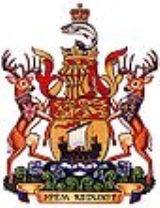 Encyclopedia
The Court of Queen's Bench of New Brunswick (in French
Canadian French
Canadian French is an umbrella term referring to the varieties of French spoken in Canada. French is the mother tongue of nearly seven million Canadians, a figure constituting roughly 22% of the national population. At the federal level it has co-official status alongside English...
: Cour du Banc de la Reine du Nouveau-Brunswick) is the superior court
Superior court
In common law systems, a superior court is a court of general competence which typically has unlimited jurisdiction with regard to civil and criminal legal cases...
of the Canadian province of New Brunswick
New Brunswick
New Brunswick is one of Canada's three Maritime provinces and is the only province in the federation that is constitutionally bilingual . The provincial capital is Fredericton and Saint John is the most populous city. Greater Moncton is the largest Census Metropolitan Area...
.