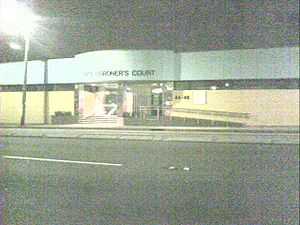 The name of "Coroners Court" is the generic name given to proceedings
Proceedings
In academia, proceedings are the collection of academic papers that are published in the context of an academic conference. They are usually distributed as printed books either before the conference opens or after the conference has closed. Proceedings contain the contributions made by researchers...
in which a Coroner holds an inquest
Inquest
Inquests in England and Wales are held into sudden and unexplained deaths and also into the circumstances of discovery of a certain class of valuable artefacts known as "treasure trove"...
or an inquiry
Inquiry
An inquiry is any process that has the aim of augmenting knowledge, resolving doubt, or solving a problem. A theory of inquiry is an account of the various types of inquiry and a treatment of the ways that each type of inquiry achieves its aim.-Deduction:...
in New South Wales
New South Wales
New South Wales is a state of :Australia, located in the east of the country. It is bordered by Queensland, Victoria and South Australia to the north, south and west respectively. To the east, the state is bordered by the Tasman Sea, which forms part of the Pacific Ocean. New South Wales...
. Coroners have jurisdiction
Jurisdiction
Jurisdiction is the practical authority granted to a formally constituted legal body or to a political leader to deal with and make pronouncements on legal matters and, by implication, to administer justice within a defined area of responsibility...
over the remains of a person and the power to make findings in respect of the cause of death of a person. Where a serious criminal offence has been disclosed during the course of an inquest or an inquiry, the Coroner may terminate the proceedings and refer that matter to the Director of Public Prosecutions
Director of Public Prosecutions
The Director of Public Prosecutions is the officer charged with the prosecution of criminal offences in several criminal jurisdictions around the world...
for consideration of the institution of criminal proceedings.

Coroners may also hold inquiries concerning the cause of any fire in New South Wales.

Arthur Phillip
Arthur Phillip
Admiral Arthur Phillip RN was a British admiral and colonial administrator. Phillip was appointed Governor of New South Wales, the first European colony on the Australian continent, and was the founder of the settlement which is now the city of Sydney.-Early life and naval career:Arthur Phillip...
, the first governor of the colony of New South Wales, was authorised by the British monarch to appoint such officials as were necessary for the administration of justice in the colony. This authority came to Phillip through what is commonly called the "second commission". One of the offices that he could appoint was that of coroner.

In the early days of the colony, the role of the coroner was often performed by a justice of the peace. The first inquiry in the nature of a coronial inquest was conducted on 14 December 1788. This was presided over by Augustus Alt
Augustus Alt
Augustus Theodore Harman Alt was a British soldier , engineer and surveyor. His father Jost Heinrich was Hessian and entered the service of the Landgrave in Sweden as writer to Major-General Ernst Hartmann von Diemar...
, one of the first justices of the peace appointed by Phillip .

The Governor of New South Wales may appoint a State Coroner for New South Wales. The State Coroner has the function to oversee and co-ordinate coronial services in New South Wales, ensure that all deaths, suspected deaths, fires and explosions concerning which a coroner has jurisdiction to hold an inquest or inquiry are properly investigated, ensuring that an inquest or inquiry is held whenever it is required, and to issue guidelines to coroners to assist them in the exercise or performance of their functions.

All magistrates in New South Wales are ex-officio coroners by virtue of their appointment as magistrates.