Encyclopedia
Construcciones Aeronáuticas SA (CASA), was a Spanish aircraft manufacturer. It became EADS CASA the Spanish branch of EADS
EADS
The European Aeronautic Defence and Space Company N.V. is a global pan-European aerospace and defence corporation and a leading defence and military contractor worldwide...
in 1999, but was absorbed by Airbus Military
Airbus Military
thumb|First [[Airbus A400M]] roll-out in [[Seville]] in June 2008Airbus Military is a business unit of Airbus, which is part of the EADS conglomerate...
in 2009. CASA produced numerous landmark military transport aircraft designs such as the CASA C-212 Aviocar, the CASA C-295
EADS CASA C-295
The EADS CASA C-295 is a twin-turboprop tactical military transport aircraft manufactured by Airbus Military in Spain.-Design and development:...
and the CASA C-101 trainer/ground attack aircraft.

Construcciones Aeronáuticas SA (CASA) was founded by Jose Ortiz Echagüe in 1923 and began work on a factory in Getafe
Getafe
Getafe is a city in the southern zone of the Madrid metropolitan area, Spain, and one of the most populated and industrialized cities in the municipality. The city is home to one of the oldest Spanish military air bases, as well as the Universidad Carlos III de Madrid...
in May 1924, building Breguet
Breguet
Breguet may refer to: * Breguet , watch manufacturer* Breguet Aviation, a defunct French aircraft manufacturer; was formally known as "Société Anonyme des Ateliers d'Aviation Louis Breguet"...
aircraft under license. The first order covered 26 19 A.2s; total production of this type eventually reached 400 units.

CASA built a second factory in Cadiz
Cádiz
Cadiz is a city and port in southwestern Spain. It is the capital of the homonymous province, one of eight which make up the autonomous community of Andalusia....
in 1926 to construct a licensed copy of the German Dornier Do. J Wal
Dornier Do J
The Dornier Do J Wal was a twin-engine German flying boat of the 1920s designed by Dornier Flugzeugwerke. The Do J was designated the Do 16 by the Reich Air Ministry under its aircraft designation system of 1933....
seaplane. They built 17 aircraft for the Spanish Air Force
Spanish Air Force
-The early stages:Hot air balloons had been used with military purposes in Spain as far back as 1896. In 1905, with the help of Alfredo Kindelán, Leonardo Torres y Quevedo directed the construction of the first Spanish dirigible in the Army Military Aerostatics Service, created in 1896 and located...
, 12 for the Naval Aviation branch of the Spanish Navy and two for commercial use. CASA also operated several branch facilities in Spain for the repair and overhaul of aircraft. In 1929 the CASA-1
CASA III
|-References:SourcesBibliography...
flew - the first CASA designed aircraft. King Alfonso XIII visited the main factory in 1930. CASA also built the French Breguet XIX, two of which would be made especially famous. One, was the Breguet XIX GR (Grand Raid) named the Jesus del Gran Poder, currently preserved in the Museo del Aire de Cuatro Vientos (Madrid), which flew between Seville
Seville
Seville is the artistic, historic, cultural, and financial capital of southern Spain. It is the capital of the autonomous community of Andalusia and of the province of Seville. It is situated on the plain of the River Guadalquivir, with an average elevation of above sea level...
and Bahia
Bahia
Bahia is one of the 26 states of Brazil, and is located in the northeastern part of the country on the Atlantic coast. It is the fourth most populous Brazilian state after São Paulo, Minas Gerais and Rio de Janeiro, and the fifth-largest in size...
, (in Brazil), in 1929. This aircraft was piloted by Captains Ignacio Jiménez and Francisco Iglesias and covered 6746 km in 43 hours 50 minutes. The other was the Breguet XIX Super Bidon, named the Four Winds; it was flown by Mariano Barberan and Collar Joaquin Serra to Havana in Cuba in 1933. In 1932 CASA obtained a license from the UK aircraft company, Vickers, to build 25 Vickers Vildebeest
Vickers Vildebeest
The Vickers Vildebeest and the similar Vickers Vincent were two very large two- to three-seat single-engined British biplanes designed and built by Vickers and used as a light bomber, torpedo bomber and in the army cooperation roles...
land-based torpedo bombers, which were powered by French Hispano 600 hp engines. 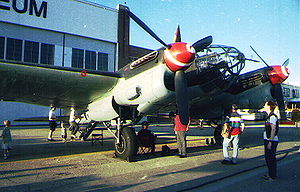 During the Spanish Civil War the CASA Getafe factory was located in the Republican zone. It was moved to Alicante
Alicante
Alicante or Alacant is a city in Spain, the capital of the province of Alicante and of the comarca of Alacantí, in the south of the Valencian Community. It is also a historic Mediterranean port. The population of the city of Alicante proper was 334,418, estimated , ranking as the second-largest...
, another opened in Sabadell
Sabadell
Sabadell is the second largest city in the comarca of the Vallès Occidental in Catalonia, Spain. It is in the south of the comarca, on the River Ripoll, 20 km north-west of Barcelona...
. At the end of the war production returned to Getafe. CASA manufactured the Russian Polikarpov I-15
Polikarpov I-15
The Polikarpov I-15 was a Soviet biplane fighter aircraft of the 1930s. Nicknamed Chaika because of its gulled upper wings, it was operated in large numbers by the Soviet Air Force, and together with the Polikarpov I-16 monoplane, was one of the standard fighters of the Spanish Republicans during...
biplane fighter, producing 287 aircraft before the end of the civil war.

After the Spanish Civil War, CASA opened a new plant in Tablada in Seville, after obtaining various aircraft licenses from Germany and built 25 Gotha Go 145A
Gotha Go 145
-See also:-Bibliography:* Bishop, C. Luftwaffe Squadrons, 1939–1945. Amber Books, 2006.* Donald, D. Warplanes of the Luftwaffe: Combat aircraft of Hitler’s Luftwaffe, 1933 -1945. Aerospace Publishing, 2001....
as the CASA 1145, 25 Bücker Bü 133 Jungmeister as the CASA 1133 and 555 Bücker Bü 131 Jungmann as the CASA 1131. Production of these aircraft continued until the late 1950s. The CASA 201, a twin engine transport, (its engines were the Spanish-made ENMASA VAT Tigre G-125). In 1940 CASA began the licensed manufacture of 200 Heinkel He 111
Heinkel He 111
The Heinkel He 111 was a German aircraft designed by Siegfried and Walter Günter in the early 1930s in violation of the Treaty of Versailles. Often described as a "Wolf in sheep's clothing", it masqueraded as a transport aircraft, but its purpose was to provide the Luftwaffe with a fast medium...
twin engine bombers with imported Rolls Royce Merlins, as the CASA 2111. (These are the aircraft that were used as World War Two German Luftwaffe He-111s in various movies such as "The Battle of Britain" and "Patton".)

Starting in 1943, the Spanish government began investing in CASA, first obtaining a 33 per cent share of the company, by 1992 this had increased to a controlling 99.2 per cent. In 1945 CASA opened a factory in Madrid dedicated to manufacturing the parts and sub-assemblies of their various aircraft and those that they had contracts to repair and overhaul. In 1946 CASA re-established the Projects Office and resumed the design of aircraft based on the firm's proprietary technology. In 1957 CASA won a contract from the United States Air Force
United States Air Force
The United States Air Force is the aerial warfare service branch of the United States Armed Forces and one of the American uniformed services. Initially part of the United States Army, the USAF was formed as a separate branch of the military on September 18, 1947 under the National Security Act of...
for the maintenance of the F-100 Super Sabre
F-100 Super Sabre
The North American F-100 Super Sabre was a supersonic jet fighter aircraft that served with the United States Air Force from 1954 to 1971 and with the Air National Guard until 1979. The first of the Century Series collection of USAF jet fighters, it was the first USAF fighter capable of...
s based in Europe and Turkey and a contract from the Spanish Air Force to overhaul T-33
T-33
T-33 may refer to:*T-33 Shooting Star a U.S. jet trainer*T-33 Light Amphibious Tank a Soviet light tankSimilar designations:*Alfa Romeo Tipo 33*London Buses route T33*Sony Cyber-shot DSC-T33...
s in the Spanish Air Force. They began the manufacture of the Northrop F-5A fighter-bomber under license in 1962. In 1971, CASA merged with the other large Spanish aerospace firm Hispano Aviación
Hispano Aviacion
Hispano Aviación was a Spanish aircraft factory which began production in 1939, after a section of the Hispano-Suiza factory was isolated into a "Nationalist" area during the Spanish Civil War....
.

CASA was one of the original members of the Airbus
Airbus
Airbus SAS is an aircraft manufacturing subsidiary of EADS, a European aerospace company. Based in Blagnac, France, surburb of Toulouse, and with significant activity across Europe, the company produces around half of the world's jet airliners....
Consortium with France, Germany and the United Kingdom in 1972. In 1977, CASA was awarded the contract to design and build the C-101, a trainer and attack aircraft for the Spanish Air Force
Spanish Air Force
-The early stages:Hot air balloons had been used with military purposes in Spain as far back as 1896. In 1905, with the help of Alfredo Kindelán, Leonardo Torres y Quevedo directed the construction of the first Spanish dirigible in the Army Military Aerostatics Service, created in 1896 and located...
. CASA joined the Eurofighter 2000
Eurofighter Typhoon
The Eurofighter Typhoon is a twin-engine, canard-delta wing, multirole combat aircraft, designed and built by a consortium of three companies: EADS, Alenia Aeronautica and BAE Systems; working through a holding company, Eurofighter GmbH, which was formed in 1986...
project in 1996.

CASA has been a part of EADS, the European aerospace corporation, with Aérospatiale-Matra
Aérospatiale-Matra
Aérospatiale-Matra was a French missile and aircraft manufacturer. It was formed in 1999 by the merger of French companies Aérospatiale and Matra Haute Technologie....
of France, Dornier GmbH and DASA
DASA
DaimlerChrysler Aerospace AG, or DASA, was the former aerospace subsidiary of Daimler-Benz AG from 1989...
of Germany since 1999. From then, the Spanish branch of EADS is called EADS-CASA. The current CEO and Chairman of EADS-CASA is Domingo Ureña-Raso. EADS-CASA currently employs around 7,500 workers.