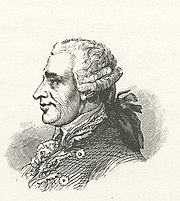 Conrad Alexandre Gérard de Rayneval (12 December 1729 – 16 April 1790), also known as Conrad Alexandre Gérard, was a French
France
The French Republic , The French Republic , The French Republic , (commonly known as France , is a unitary semi-presidential republic in Western Europe with several overseas territories and islands located on other continents and in the Indian, Pacific, and Atlantic oceans. Metropolitan France...
diplomat, born at Masevaux in upper Alsace
Alsace
Alsace is the fifth-smallest of the 27 regions of France in land area , and the smallest in metropolitan France. It is also the seventh-most densely populated region in France and third most densely populated region in metropolitan France, with ca. 220 inhabitants per km²...
(now Haut-Rhin
Haut-Rhin
Haut-Rhin is a département of the Alsace region of France, named after the Rhine river. Its name means Upper Rhine. Haut-Rhin is the smaller and less populated of the two departements of Alsace, although is still densely populated compared to the rest of France.-Subdivisions:The department...
). He is best known as the first French diplomatic representative to the United States
United States
The United States of America is a federal constitutional republic comprising fifty states and a federal district...
. His brother Joseph Matthias Gérard de Rayneval
Joseph Matthias Gérard de Rayneval
Joseph Matthais Gérard de Rayneval served as under-secretary of state to Comte de Vergennes.In 1776, he produced a memo of the strategic situation, Reflections on the Situation in America....
was also a diplomat.

Conrad Alexandre Gérard served as secretary of the French legation to the Elector Palatine at Mannheim
Mannheim
Mannheim is a city in southwestern Germany. With about 315,000 inhabitants, Mannheim is the second-largest city in the Bundesland of Baden-Württemberg, following the capital city of Stuttgart....
from 1753 to 1759, and secretary of the French Embassy to Austria
Austria
Austria , officially the Republic of Austria , is a landlocked country of roughly 8.4 million people in Central Europe. It is bordered by the Czech Republic and Germany to the north, Slovakia and Hungary to the east, Slovenia and Italy to the south, and Switzerland and Liechtenstein to the...
at Vienna
Vienna
Vienna is the capital and largest city of the Republic of Austria and one of the nine states of Austria. Vienna is Austria's primary city, with a population of about 1.723 million , and is by far the largest city in Austria, as well as its cultural, economic, and political centre...
from 1761 to 1766. In July 1766 he was recalled to Paris
Paris
Paris is the capital and largest city in France, situated on the river Seine, in northern France, at the heart of the Île-de-France region...
to become secretary of the Council of State
Conseil du Roi
The Conseil du Roi or King's Council is a general term for the administrative and governmental apparatus around the king of France during the Ancien Régime designed to prepare his decisions and give him advice...
and chief clerk in the Bureau of Foreign Affairs.

Early in 1778, under instructions from Vergennes
Charles Gravier, comte de Vergennes
Charles Gravier, comte de Vergennes was a French statesman and diplomat. He served as Foreign Minister from 1774 during the reign of Louis XVI, notably during the American War of Independence....
, he conducted the negotiations with the American representatives, Benjamin Franklin
Benjamin Franklin
Dr. Benjamin Franklin was one of the Founding Fathers of the United States. A noted polymath, Franklin was a leading author, printer, political theorist, politician, postmaster, scientist, musician, inventor, satirist, civic activist, statesman, and diplomat...
, Silas Deane
Silas Deane
Silas Deane was an American merchant, politician and diplomat. Originally a supporter of American independence Deane served as a delegate to the Continental Congress and then as the United States' first foreign diplomat when he travelled to France to lobby the French government for aid...
, and Arthur Lee
Arthur Lee (diplomat)
Dr. Arthur Lee was an American diplomat during the American Revolutionary War. He was the son of Hon. Thomas Lee and Hannah Harrison Ludwell...
, which resulted in the signing of the Treaty of Alliance
Treaty of Alliance (1778)
The Treaty of Alliance, also called The Treaty of Alliance with France, was a defensive alliance between France and the United States of America, formed in the midst of the American Revolutionary War, which promised military support in case of attack by British forces indefinitely into the future...
and the Treaty of Amity and Commerce
Treaty of Amity and Commerce (USA-France)
The Treaty of Amity and Commerce Between the United States and France, along with its sister document the Treaty of Alliance, was one of two treaties signed on February 6, 1778 at the Hôtel de Crillon in Paris, France between the United States and France...
with the United States on February 6, 1778. In March, 1778, he travelled to America, as the first accredited Minister
Diplomatic rank
Diplomatic rank is the system of professional and social rank used in the world of diplomacy and international relations. Over time it has been formalized on an international basis.-Ranks:...
from France to the United States. He sailed in company with Silas Deane aboard the comte d'Estaing
Charles Hector, comte d'Estaing
Jean Baptiste Charles Henri Hector, comte d'Estaing was a French general, and admiral. He began his service as a soldier in the War of the Austrian Succession, briefly spending time as a prisoner of war of the British during the Seven Years' War...
's flagship of the seventeen-ship battle fleet transporting four thousand French troops. Congress welcomed Gerard on July 14, one day before it opened investigations into charges against Deane.

This post he held until superseded by the Chevalier de la Luzerne
Anne-César, Chevalier de la Luzerne
Anne-César, Chevalier de la Luzerne was a French soldier and diplomat. He served as the second French minister to the United States, from 1779 to 1784, succeeding Conrad Alexandre Gérard....
, in September, 1779. His activity in America consisted chiefly in subsidizing writers — of whom Thomas Paine
Thomas Paine
Thomas "Tom" Paine was an English author, pamphleteer, radical, inventor, intellectual, revolutionary, and one of the Founding Fathers of the United States...
was the best known — to create a sentiment favorable to a closer French alliance, and in somewhat questionable relations with various members of Congress
Continental Congress
The Continental Congress was a convention of delegates called together from the Thirteen Colonies that became the governing body of the United States during the American Revolution....
, who were the recipients of "gifts" from him. His communications to Congress were, for the most part, oral addresses delivered at their secret sessions. During his residence in America he received the degree of LL.D. from Yale
Yale University
Yale University is a private, Ivy League university located in New Haven, Connecticut, United States. Founded in 1701 in the Colony of Connecticut, the university is the third-oldest institution of higher education in the United States...
, and on his return to France was made a Councilor of State
Conseiller d'État
A French Councillor of State is a high-level government official of administrative law in the Council of State of France.-Under the Old Regime:...
.