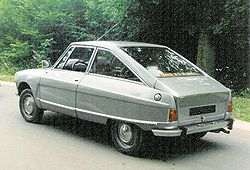 The Citroën M35 was a coupé
Coupé
A coupé or coupe is a closed car body style , the precise definition of which varies from manufacturer to manufacturer, and over time...
derived from the Ami 8
Citroën Ami
The Citroën Ami is a supermini produced by the French automaker Citroën from 1961 to 1978. The Ami and stablemate Citroën Dyane were replaced by the Citroën Visa and Citroën Axel . The Ami was for some years the best-selling car model in France...
, and equipped with a Wankel engine
Wankel engine
The Wankel engine is a type of internal combustion engine using an eccentric rotary design to convert pressure into a rotating motion instead of using reciprocating pistons. Its four-stroke cycle takes place in a space between the inside of an oval-like epitrochoid-shaped housing and a rotor that...
and a hydropneumatic suspension. The bodies were produced by Heuliez
Heuliez
Heuliez is a French company that works as a production and design unit for various automakers. It specializes in producing short series for niche markets, such as convertibles or station-wagons....
from 1969 to 1971.

The longitudinally mounted rotary engine had a nominal capacity of 995 cc delivering 49 bhp. According to factory figures the car had a performance roughly on a level with that of a Morris 1300
BMC ADO16
ADO16 is the codename for the development of what became the Morris 1100, a small family car built by the British Motor Corporation and, later, British Leyland...
. The engine
Wankel engine
The Wankel engine is a type of internal combustion engine using an eccentric rotary design to convert pressure into a rotating motion instead of using reciprocating pistons. Its four-stroke cycle takes place in a space between the inside of an oval-like epitrochoid-shaped housing and a rotor that...
was supplied by a company formed in 1967 by NSU
NSU Motorenwerke AG
NSU Motorenwerke AG, normally just NSU, was a German manufacturer of automobiles, motorcycles and pedal cycles, founded in 1873. It was acquired by Volkswagen Group in 1969...
and Citroën
Citroën
Citroën is a major French automobile manufacturer, part of the PSA Peugeot Citroën group.Founded in 1919 by French industrialist André-Gustave Citroën , Citroën was the first mass-production car company outside the USA and pioneered the modern concept of creating a sales and services network that...
called Comotor
Comotor
The Company Comotor SA was a joint venture between NSU and Citroën, created in Luxembourg in April 1967. Its goal was to produce Wankel engines....
.

The M35 was an experimental vehicle and was not officially sold - rather it was supplied to loyal Citroën customers to get their comments on the usability of the design. Many aspects of the M35 made it to regular production. The rotary engine was deemed satisfactory and a dual rotor version of it was used in the GS Birotor in 1974; the gearbox used in the M35 was the GS 1015’s gearbox (albeit with a normal shift pattern); certain suspension bits found their way into the GS line when it came out in 1970 and the seats that reclined just above the waist were found in none other than the SM.