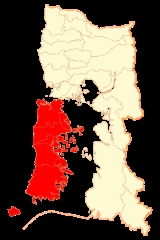 Encyclopedia
Chiloé Province is one of the four provinces
Provinces of Chile
A province is the second largest administrative division in Chile, after a region. Each region is divided into provinces. There are 54 provinces in total....
in the southern Chile
Chile
Chile ,officially the Republic of Chile , is a country in South America occupying a long, narrow coastal strip between the Andes mountains to the east and the Pacific Ocean to the west. It borders Peru to the north, Bolivia to the northeast, Argentina to the east, and the Drake Passage in the far...
an region of Los Lagos
Los Lagos Region
Los Lagos Region is one of Chile's 15 regions, which are first order administrative divisions, and comprises four provinces: Chiloé, Llanquihue, Osorno and Palena. The region contains the country's second largest island, Chiloé, and the second largest lake, Llanquihue.Its capital is Puerto Montt;...
(X). It encompasses all of Chiloé Archipelago
Chiloé Archipelago
Chiloé Archipelago consists of several islands lying off the coast of Chile. It is separated from mainland Chile by Chacao Channel in the north, the Sea of Chiloé in the east and Gulf of Corcovado to the southeast. All of the archipelago except Desertores Islands, which are part of Palena...
(including Chiloé Island
Chiloé Island
Chiloé Island , also known as Greater Island of Chiloé , is the largest island of the Chiloé Archipelago off the coast of Chile, in the Pacific Ocean...
) with the exception of the Desertores Islands
Desertores Islands
Desertores Islands are a group of six islands in the Sea of Chiloé, between Chiloé Island and the Chilean mainland. The islands are considered to belong to Chiloé Archipelago although they are administered as part of Palena Province instead of Chiloé Province...
. The province spans a surface area of 9181 sqkm. Its capital is Castro
Castro, Chile
Castro is a city and commune in the Chilean island of Chiloé Island. Castro is the capital of the Chiloé Province in the Los Lagos Region. It is Chile's third oldest city in continued existence...
, and the seat of the Roman Catholic bishopric
Diocese
A diocese is the district or see under the supervision of a bishop. It is divided into parishes.An archdiocese is more significant than a diocese. An archdiocese is presided over by an archbishop whose see may have or had importance due to size or historical significance...
is Ancud
Ancud
Ancud is a city in southern Chile located in the northernmost part of the island and province of Chiloé, in Los Lagos Region .-Geography:...
.

As a province
Province
A province is a territorial unit, almost always an administrative division, within a country or state.-Etymology:The English word "province" is attested since about 1330 and derives from the 13th-century Old French "province," which itself comes from the Latin word "provincia," which referred to...
, Chiloé is a second-level administrative division
Administrative divisions of Chile
The administrative division or territorial organization of Chile exemplifies characteristics of a unitary state. State administration is functionally and geographically decentralized, as appropriate for each authority in accordance with the law....
of Chile, governed by a provincial governor
Governor
A governor is a governing official, usually the executive of a non-sovereign level of government, ranking under the head of state...
who is appointed by the president
President of Chile
The President of the Republic of Chile is both the head of state and the head of government of the Republic of Chile. The President is responsible of the government and state administration...
.

The province is composed of ten communes, each governed by a municipality consisting of an alcalde
Alcalde
Alcalde , or Alcalde ordinario, is the traditional Spanish municipal magistrate, who had both judicial and administrative functions. An alcalde was, in the absence of a corregidor, the presiding officer of the Castilian cabildo and judge of first instance of a town...
and municipal council
Municipal council
A municipal council is the local government of a municipality. Specifically the term can refer to the institutions of various countries that can be translated by this term...
.

According to the 2002 census by the National Statistics Institute
National Statistics Institute (Chile)
The National Statistics Institute of Chile is a state-run organization of the Government of Chile, created in the second half of the 19th century and tasked with performing a general census of population and housing, then collecting, producing and publishing official demographic statistics of...
(INE), the province spans an area of 7165.5 sqkm and had a population of 142,194 inhabitants (71,386 men and 70,808 women), giving it a population density of 19.8 PD/sqkm. Of these, 82,058 (57.7%) lived in urban areas and 60,136 (42.3%) in rural areas. Between the 1992 and 2002 censuses, the population grew by 9.1% (11,805 persons).
The source of this article is wikipedia, the free encyclopedia.  The text of this article is licensed under the GFDL.