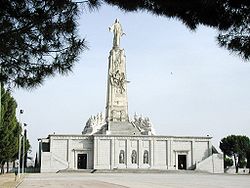 The Cerro de los Ángeles (Hill of the Angels) is a famous hill located in Getafe
Getafe
Getafe is a city in the southern zone of the Madrid metropolitan area, Spain, and one of the most populated and industrialized cities in the municipality. The city is home to one of the oldest Spanish military air bases, as well as the Universidad Carlos III de Madrid...
, Spain
Spain
Spain , officially the Kingdom of Spain languages]] under the European Charter for Regional or Minority Languages. In each of these, Spain's official name is as follows:;;;;;;), is a country and member state of the European Union located in southwestern Europe on the Iberian Peninsula...
, about 10 km (6.2 mi) south of Madrid
Madrid
Madrid is the capital and largest city of Spain. The population of the city is roughly 3.3 million and the entire population of the Madrid metropolitan area is calculated to be 6.271 million. It is the third largest city in the European Union, after London and Berlin, and its metropolitan...
. The site is famous for being considered the geographic centre of the Iberian Peninsula
Iberian Peninsula
The Iberian Peninsula , sometimes called Iberia, is located in the extreme southwest of Europe and includes the modern-day sovereign states of Spain, Portugal and Andorra, as well as the British Overseas Territory of Gibraltar...
. On top of the hill there is a 14th century monastery
Monastery
Monastery denotes the building, or complex of buildings, that houses a room reserved for prayer as well as the domestic quarters and workplace of monastics, whether monks or nuns, and whether living in community or alone .Monasteries may vary greatly in size – a small dwelling accommodating only...
named Our Lady of the Angels (Nuestra Señora de los Ángeles), as well as the Monument to the Sacred Heart of Jesus (Monumento al Sagrado Corazón), built in 1919 to dedicate the country and inaugurated by king Alfonso XIII.

Several Spanish Civil War
Spanish Civil War
The Spanish Civil WarAlso known as The Crusade among Nationalists, the Fourth Carlist War among Carlists, and The Rebellion or Uprising among Republicans. was a major conflict fought in Spain from 17 July 1936 to 1 April 1939...
battles occurred on the hill, resulting on the destruction of the original monument. Bullet marks dating from the war can be seen on the Sagrado Corazón monument as well as the walls of the monastery.

After the war, the government moved the remains of the monument across the esplanade and, funded by popular subscription, rebuilt a bigger version with an underground church.
In the monument resides the patron virgin of Getafe (Spanish cities often each have their own town virgins); thus the place is very well traveled and loved by the citizens of Getafe.

From the geologic point of view, the hill has a peak altitude of 670 meters (2200 feet) above sea level, with the base at 610 meters (2000 feet). The area surrounding the hill is flat in all directions, making for great panoramic views of Madrid, Getafe, and the surrounding countryside.

A radio tower sits on the peak of the hill besides the monastery.
The seminary
Seminary
A seminary, theological college, or divinity school is an institution of secondary or post-secondary education for educating students in theology, generally to prepare them for ordination as clergy or for other ministry...
for the diocese of Getafe is located by the monastery.