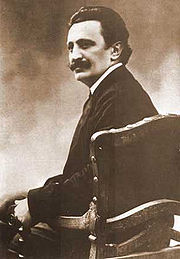 Branislav Nušić was a Serbia
Serbia
Serbia , officially the Republic of Serbia , is a landlocked country located at the crossroads of Central and Southeast Europe, covering the southern part of the Carpathian basin and the central part of the Balkans...
n novelist of Aromanian descent, playwright, satirist, essayist and founder of modern rhetoric
Rhetoric
Rhetoric is the art of discourse, an art that aims to improve the facility of speakers or writers who attempt to inform, persuade, or motivate particular audiences in specific situations. As a subject of formal study and a productive civic practice, rhetoric has played a central role in the Western...
in Serbia. He also worked as a journalist and a civil servant.

Twenty-one-year-old Nušić fought in the Serbo-Bulgarian War
Serbo-Bulgarian War
The Serbo-Bulgarian War was a war between Serbia and Bulgaria that erupted on 14 November 1885 and lasted until 28 November the same year. Final peace was signed on 19 February 1886 in Bucharest...
of 1885 while serving in the Serbian Army. After the war, he published a controversial poem "Dva Raba" in Dnevni list for which he spent two years in prison. The poem ridiculed Serbian King Milan
Milan Obrenovic IV
Milan Obrenović was a Serbian monarch reigning as Prince Milan IV of Serbia from 1868 to 1882 and King Milan I of Serbia from 1882 to 1889.-Early years:...
, namely his decision to attend the funeral of the Serbian general Dragutin Franasović's mother instead of that of the war's hero Captain Mihailo Katanić who died as a result of wounds sustained while saving the regimental flag from the hands of Bulgarians.

At first, Nušić's sentence was only two months, but the King pressured the judges to extend it. Despite harsh prison conditions, Nušić still managed to write a comedy: Protekcija (Protection).
When he first asked the prison intendant, Ilia Vlah, for the permission to write, Vlah told him that it was the writing that got him into prison, and denied his request. Knowing that intendant read all outgoing mail, Nušić wrote a brief letter to the second husband of his aunt (he was related to her first husband), who served as a minister of justice. Nušić addressed Gersić as uncle and told him how it would be much easier for him to serve two years if he could write. He noted that he had no interest in writing political texts, and signed the letter your nephew. One day later, Vlah allowed him to write literature.

In 1889, Nušić became a civil servant. As an official in the Ministry of Foreign Affairs he was appointed to clerk of consulate in the city of Bitola
Bitola
Bitola is a city in the southwestern part of the Republic of Macedonia. The city is an administrative, cultural, industrial, commercial, and educational centre. It is located in the southern part of the Pelagonia valley, surrounded by the Baba and Nidže mountains, 14 km north of the...
, where he eventually married (1893). He spent a decade in southern Serbia
Serbia
Serbia , officially the Republic of Serbia , is a landlocked country located at the crossroads of Central and Southeast Europe, covering the southern part of the Carpathian basin and the central part of the Balkans...
and Macedonia
Macedonia (region)
Macedonia is a geographical and historical region of the Balkan peninsula in southeastern Europe. Its boundaries have changed considerably over time, but nowadays the region is considered to include parts of five Balkan countries: Greece, the Republic of Macedonia, Bulgaria, Albania, Serbia, as...
. His last position in this region was Vice-consul in Pristina
Pristina
Pristina, also spelled Prishtina and Priština is the capital and largest city of Kosovo. It is the administrative centre of the homonymous municipality and district....
.

In 1912, Nušić returned to Bitola as a civil servant. During Balkan Wars
Balkan Wars
The Balkan Wars were two conflicts that took place in the Balkans in south-eastern Europe in 1912 and 1913.By the early 20th century, Montenegro, Bulgaria, Greece and Serbia, the countries of the Balkan League, had achieved their independence from the Ottoman Empire, but large parts of their ethnic...
in February 1913, Nušić, who was the prefect
Prefect
Prefect is a magisterial title of varying definition....
, was regarded as too moderate, and replaced by someone more sympathetic with the views of the military party and of "the black hand
Black Hand
Unification or Death , unofficially known as the Black Hand , was a secret military society formed by members of the Serbian army in the Kingdom of Serbia, which was founded on September 6, 1901. It was intent on uniting all of the territories containing significant Serb populations annexed by...
." In 1913, he founded a theater in Skopje
Skopje
Skopje is the capital and largest city of the Republic of Macedonia with about a third of the total population. It is the country's political, cultural, economic, and academic centre...
, where he lived until 1915. Due to the World War I
World War I
World War I , which was predominantly called the World War or the Great War from its occurrence until 1939, and the First World War or World War I thereafter, was a major war centred in Europe that began on 28 July 1914 and lasted until 11 November 1918...
, Nušić fled the country and lived in Italy
Italy
Italy , officially the Italian Republic languages]] under the European Charter for Regional or Minority Languages. In each of these, Italy's official name is as follows:;;;;;;;;), is a unitary parliamentary republic in South-Central Europe. To the north it borders France, Switzerland, Austria and...
, Switzerland
Switzerland
Switzerland name of one of the Swiss cantons. ; ; ; or ), in its full name the Swiss Confederation , is a federal republic consisting of 26 cantons, with Bern as the seat of the federal authorities. The country is situated in Western Europe,Or Central Europe depending on the definition....
and France for its duration.

After the war, Nušić was appointed to be the first head of the Art Department of the Ministry of Education. He remained at this post until 1923. Afterwards, he was appointed head of Narodno pozorište (National Theater) in Sarajevo. In 1927, he returned to Belgrade.

Nušić is more celebrated as a playwright than as a novelist. His incidental novels and journalistic feuilletons are not always moralistic or polished, but they are lively and amusing sketches of life. He is more prolific in historical drama and comedy. Of his plays, the most popular are Protekcija (The Pull), Običan Čovek (An Ordinary Man), Iza Božijih Leđa (Behind God's Back), Prince of Semberia, Pučina (The High Sea), Hadži Loja, and Rastko Nemanjić.

Through his plays, Nušić presented Serbian society and the mentality of the middle class in small towns and counties. He brought to the stage not only the retailers, canton captains, semi-educated officers, and current and former ministers' wives, but also formerly distinguished and overly ambitious householders, their decadent sons, failed students, distinguished daughters of marriageable age, and greedy upstarts.

All-in-all he depicted the Serbian middle class and its morality, which managed to survive despite all the political and social reforms, newly formed educational system and cultural institutions. He also paid special attention to the social conditions of their origins, as they started out with unrealizable desires and insatiable appetites, the distorted family and marital relationships, misunderstandings and intolerance between fathers and sons, unfaithful husbands and wives, officers’ ignorance and corruption and unreal political ambitions. Nušić thus became not only a playwright, observer and interpreter of his time, but also an analyst of Serbian society and its mentality at a specific historical period.