Brühl is a town in the Rhineland
Rhineland
Historically, the Rhinelands refers to a loosely-defined region embracing the land on either bank of the River Rhine in central Europe....
of Germany
Germany
Germany , officially the Federal Republic of Germany , is a federal parliamentary republic in Europe. The country consists of 16 states while the capital and largest city is Berlin. Germany covers an area of 357,021 km2 and has a largely temperate seasonal climate...
. It is located in Rhein-Erft-Kreis
Rhein-Erft-Kreis
The Rhein-Erft-Kreis is a district in the west of North Rhine-Westphalia, Germany. Neighboring districts are Neuss, district-free Cologne, Rhein-Sieg, Euskirchen, Düren.-History:...
, 20 km south of Cologne
Cologne
Cologne is Germany's fourth-largest city , and is the largest city both in the Germany Federal State of North Rhine-Westphalia and within the Rhine-Ruhr Metropolitan Area, one of the major European metropolitan areas with more than ten million inhabitants.Cologne is located on both sides of the...
city center and at the edge of Naturpark Kottenforst-Ville
Naturpark Kottenforst-Ville
Rheinland Nature Park is a nature park in North Rhine-Westphalia, situated between Bergheim, Kerpen, Erftstadt, Euskirchen, Königswinter, Bornheim, Bonn, Brühl, Hürth, Frechen and Pulheim...
Nature Reserve. 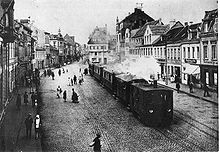 The town of Brühl was the residence of the Prince Bishops of Cologne
Archbishopric of Cologne
The Electorate of Cologne was an ecclesiastical principality of the Holy Roman Empire and existed from the 10th to the early 19th century. It consisted of the temporal possessions of the Roman Catholic Archdiocese of Cologne . It was ruled by the Archbishop in his function as prince-elector of...
. In the 18th century the Prince Bishop Clemens August replaced a former ruined castle and built the Augustusburg and Falkenlust palaces
Augustusburg and Falkenlust Palaces, Brühl
The Augustusburg and Falkenlust palaces is a historical building complex in Brühl, North Rhine-Westphalia, Germany, which have been listed as a UNESCO cultural World Heritage Site since 1984. They are connected by the spacious gardens and trees of the Schlosspark.Augustusburg Palace and its parks...
near the city centre. Today both are listed as UNESCO - World Heritage Site
World Heritage Site
A UNESCO World Heritage Site is a place that is listed by the UNESCO as of special cultural or physical significance...
s. Until 1990 Augustusburg Palace was used by the West German government to receive foreign heads of states visiting West Germany.