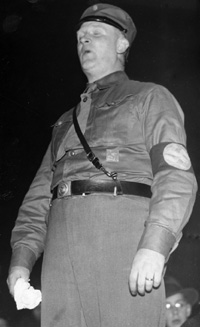 Birger Furugård was a Swedish
Sweden
Sweden , officially the Kingdom of Sweden , is a Nordic country on the Scandinavian Peninsula in Northern Europe. Sweden borders with Norway and Finland and is connected to Denmark by a bridge-tunnel across the Öresund....
politician and veterinarian
Veterinarian
A veterinary physician, colloquially called a vet, shortened from veterinarian or veterinary surgeon , is a professional who treats disease, disorder and injury in animals....
. He hailed from Deje
Deje
Deje is a locality situated in Forshaga Municipality, Värmland County, Sweden with 2,783 inhabitants in 2005....
in Värmland
Värmland
' is a historical province or landskap in the west of middle Sweden. It borders Västergötland, Dalsland, Dalarna, Västmanland and Närke. It is also bounded by Norway in the west. Latin name versions are Vermelandia and Wermelandia. Although the province's land originally was Götaland, the...
. During the 1920s Furgård became inspired by the advance of National Socialism in Germany
Germany
Germany , officially the Federal Republic of Germany , is a federal parliamentary republic in Europe. The country consists of 16 states while the capital and largest city is Berlin. Germany covers an area of 357,021 km2 and has a largely temperate seasonal climate...
. He made several trips to Germany, and met with Adolf Hitler
Adolf Hitler
Adolf Hitler was an Austrian-born German politician and the leader of the National Socialist German Workers Party , commonly referred to as the Nazi Party). He was Chancellor of Germany from 1933 to 1945, and head of state from 1934 to 1945...
, Hermann Göring
Hermann Göring
Hermann Wilhelm Göring, was a German politician, military leader, and a leading member of the Nazi Party. He was a veteran of World War I as an ace fighter pilot, and a recipient of the coveted Pour le Mérite, also known as "The Blue Max"...
and Heinrich Himmler
Heinrich Himmler
Heinrich Luitpold Himmler was Reichsführer of the SS, a military commander, and a leading member of the Nazi Party. As Chief of the German Police and the Minister of the Interior from 1943, Himmler oversaw all internal and external police and security forces, including the Gestapo...
. In 1924 Furugård, together with his two brothers Gunnar and Sigurd, founded the Swedish National Socialist Freedom League. The following year the group was converted into the Swedish National Socialist Peasants and Workers Party. In 1930 Furugård's party merged with the National Socialist People's Party of Sweden
National Socialist People's Party of Sweden
Fascist People's Party of Sweden was a political party in Sweden. It was founded on September 3, 1926, by a circle around the publication Nationen. Its cadre was made up of members of the Fascist Struggle Organisation of Sweden.Konrad Hallgren, a former German officer, became the leader of the party...
and formed the New Swedish National Socialist Party. Furugård became Riksledare (National Leader) of the party. Soon, the party changed its name to Swedish National Socialist Party (SNSP).

In March 1931 Hitler and Joseph Goebbels
Joseph Goebbels
Paul Joseph Goebbels was a German politician and Reich Minister of Propaganda in Nazi Germany from 1933 to 1945. As one of Adolf Hitler's closest associates and most devout followers, he was known for his zealous oratory and anti-Semitism...
were invited to speak at public meetings in Sweden, but the police chief in Stockholm refused to give permission.

Until 1933 Furugård was the main leader of the Swedish extreme right, and he was portrayed by his followers as future Führer
Führer
Führer , alternatively spelled Fuehrer in both English and German when the umlaut is not available, is a German title meaning leader or guide now most associated with Adolf Hitler, who modelled it on Benito Mussolini's title il Duce, as well as with Georg von Schönerer, whose followers also...
of Sweden (Sweidish
Swedish language
Swedish is a North Germanic language, spoken by approximately 10 million people, predominantly in Sweden and parts of Finland, especially along its coast and on the Åland islands. It is largely mutually intelligible with Norwegian and Danish...
: riksledare) in the event of a National Socialist seizure of power. In 1933 the second-in-command Sven-Olov Lindholm formed the National Socialist Workers Party (NSAP), rapidly superseding Furugård as the most prominent National Socialist leader in Sweden.

Furugård disbanded his party in 1936, following a meagre performance at the national election earlier that year.
The source of this article is wikipedia, the free encyclopedia.  The text of this article is licensed under the GFDL.