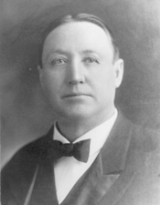 Born in West Poland
Poland, Maine
Poland is a town in Androscoggin County, Maine, United States. The population was 4,866 at the 2000 census. Home to Range Ponds State Park, Poland is a historic resort area...
, Maine
Maine
Maine is a state in the New England region of the northeastern United States, bordered by the Atlantic Ocean to the east and south, New Hampshire to the west, and the Canadian provinces of Quebec to the northwest and New Brunswick to the northeast. Maine is both the northernmost and easternmost...
, he attended the public schools, Hebron Academy
Hebron Academy
Hebron Academy, founded in 1804, is a small, independent, college preparatory boarding and day school for boys and girls in grades six through postgraduate.-History:...
and a business and preparatory school in Boston
Boston
Boston is the capital of and largest city in Massachusetts, and is one of the oldest cities in the United States. The largest city in New England, Boston is regarded as the unofficial "Capital of New England" for its economic and cultural impact on the entire New England region. The city proper had...
. He then taught school (and was elected supervisor of schools in 1878), and then engaged in the canning, dairy, and telephone businesses. He was elected to the Maine House of Representatives
Maine House of Representatives
The Maine House of Representatives is the lower house of the Maine Legislature. The House consists of 151 members representing an equal amount of districts across the state. Each voting member of the House represents around 8,450 citizens of the state...
and served 1896 to 1898 where his tenure was marked by his fine singing voice, and then 1898 to 1902 in the Maine Senate
Maine Senate
The Maine Senate is the upper house of the Maine Legislature, the state legislature of the U.S. state of Maine. The Senate currently consists of 35 members representing an equal number of districts across the state, though the Maine Constitution allows for "an odd number of Senators, not less than...
. He served as a Governor of Maine from 1909 until 1911. In 1910 he was elected president of the National Canners Association. In 1916 he was elected as a Republican to the U.S. Senate by defeating Kenneth Sills who was the Dean of Bowdoin College
Bowdoin College
Bowdoin College , founded in 1794, is an elite private liberal arts college located in the coastal Maine town of Brunswick, Maine. As of 2011, U.S. News and World Report ranks Bowdoin 6th among liberal arts colleges in the United States. At times, it was ranked as high as 4th in the country. It is...
to fill the vacancy caused by the death of Edwin C. Burleigh
Edwin C. Burleigh
Edwin Chick Burleigh was an American politician from the state of Maine.Born in Linneus, Maine he attended the common schools and Houlton Academy before becoming a teacher himself. He also worked as a surveyor and farmer before entering government...
. He was reelected in 1918 and 1924 and served from September 12, 1916, until his death in West Poland, Maine, in 1926. He was chairman of the U.S. Senate Committee on Public Buildings and Grounds for three terms.

The Fernald family farm is still in existence. Its white barn has the name Fernald Family Farm in black visible from the road.

In 1909, Fernald was a speaker at the annual meeting, in Portland, of the "New England Fat Men's Association", all of whose members had to weigh at least 201 pounds.
The source of this article is wikipedia, the free encyclopedia.  The text of this article is licensed under the GFDL.