Encyclopedia
Berlin Südkreuz is a railway station in the German
Germany
Germany , officially the Federal Republic of Germany , is a federal parliamentary republic in Europe. The country consists of 16 states while the capital and largest city is Berlin. Germany covers an area of 357,021 km2 and has a largely temperate seasonal climate...
capital Berlin
Berlin
Berlin is the capital city of Germany and is one of the 16 states of Germany. With a population of 3.45 million people, Berlin is Germany's largest city. It is the second most populous city proper and the seventh most populous urban area in the European Union...
. The station was originally opened in 1898 and is an interchange station. The Berlin Ringbahn line of the Berlin S-Bahn
Berlin S-Bahn
The Berlin S-Bahn is a rapid transit system in and around Berlin, the capital city of Germany. It consists of 15 lines and is integrated with the mostly underground U-Bahn to form the backbone of Berlin's rapid transport system...
metro railway is situated on the upper level and connects to the east and west, whilst the Anhalter Bahn and Dresdner Bahn intercity railway routes reach the station on the lower, north-south level. The station was extensively rebuilt between the late 1990s and 2006, and was renamed Berlin Südkreuz on 28 May 2006.

The station's original name (Berlin Papestraße) originates from the nearby General-Pape-Straße, which is named after the Prussia
Prussia
Prussia was a German kingdom and historic state originating out of the Duchy of Prussia and the Margraviate of Brandenburg. For centuries, the House of Hohenzollern ruled Prussia, successfully expanding its size by way of an unusually well-organized and effective army. Prussia shaped the history...
n general Alexander August Wilhelm von Pape
Alexander August Wilhelm von Pape
Alexander August Wilhelm von Pape was a Royal Prussian infantry Colonel-General with the special rank of Generalfeldmarschall....
. The Ringbahn platforms were opened on 1 January 1901, the Ringbahn platform opened as an island platform
Island platform
An island platform is a station layout arrangement where a single platform is positioned between two tracks within a railway station, tram stop or transitway interchange...
on 1 December 1901. 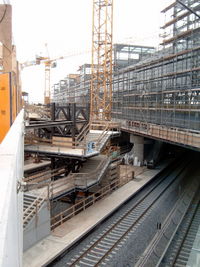 The station played a vital part in Deutsche Bahn
Deutsche Bahn
Deutsche Bahn AG is the German national railway company, a private joint stock company . Headquartered in Berlin, it came into existence in 1994 as the successor to the former state railways of Germany, the Deutsche Bundesbahn of West Germany and the Deutsche Reichsbahn of East Germany...
's new concept for long-distance services in Berlin; it was deemed necessary to have a long-distance station in southern Berlin for the new north-south axis, so it was decided to rebuild Papestraße and rename the station to Südkreuz, giving the station a more intuitive name like the Ostkreuz (East Cross) and Westkreuz (West Cross) stations on the Berlin Stadtbahn. Construction, however, was severely delayed due to unexpected difficulties and NIMBY
NIMBY
NIMBY or Nimby is an acronym for the phrase "not in my back yard". The term is used pejoratively to describe opposition by residents to a proposal for a new development close to them. Opposing residents themselves are sometimes called Nimbies...
complaints of residents living near the long-disused north-south lines. Instead of opening in 2000 as scheduled, the station only opened on 28 May 2006, together with the new Berlin Hauptbahnhof
Berlin Hauptbahnhof
' , is the main railway station in Berlin, Germany. It began full operation two days after a ceremonial opening on 26 May 2006. It is located on the site of the historic Lehrter Bahnhof, and until it opened as a main line station, it was a stop on the Berlin S-Bahn suburban railway temporarily...
(Berlin Main Station) in the center of Berlin. It is now used as a terminal station for ICE
InterCityExpress
The Intercity-Express or ICE is a system of high-speed trains predominantly running in Germany and neighbouring countries. It is the highest service category offered by DB Fernverkehr and is the flagship of Deutsche Bahn...
trains to Hamburg Hauptbahnhof
Hamburg Hauptbahnhof
is the Hauptbahnhof for the German city of Hamburg. It was opened in 1906 to replace 4 terminal stations. Hamburg Hauptbahnhof is operated by DB Station&Service...
, and sees a fair share of north-south services heading to and from Leipzig Hauptbahnhof
Leipzig Hauptbahnhof
is, at 83,460 m², Europe's largest railway station when measured by floor area. It has 24 platforms housed in six iron trainsheds; a multi-level concourse with towering stone arches; and a 293 metre-long facade...
.
The source of this article is wikipedia, the free encyclopedia.  The text of this article is licensed under the GFDL.