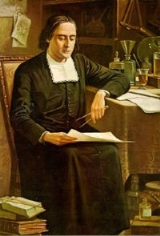 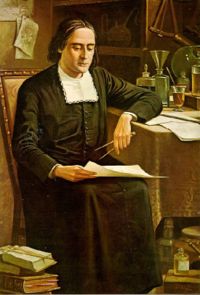 Gusmão began his novitiate
Novitiate
Novitiate, alt. noviciate, is the period of training and preparation that a novice monastic or member of a religious order undergoes prior to taking vows in order to discern whether they are called to the religious life....
in the Society of Jesus
Society of Jesus
The Society of Jesus is a Catholic male religious order that follows the teachings of the Catholic Church. The members are called Jesuits, and are also known colloquially as "God's Army" and as "The Company," these being references to founder Ignatius of Loyola's military background and a...
at Bahia
Bahia
Bahia is one of the 26 states of Brazil, and is located in the northeastern part of the country on the Atlantic coast. It is the fourth most populous Brazilian state after São Paulo, Minas Gerais and Rio de Janeiro, and the fifth-largest in size...
when he was about fifteen years old, but left the order in 1701. He went to Portugal
Portugal
Portugal , officially the Portuguese Republic is a country situated in southwestern Europe on the Iberian Peninsula. Portugal is the westernmost country of Europe, and is bordered by the Atlantic Ocean to the West and South and by Spain to the North and East. The Atlantic archipelagos of the...
and found a patron at Lisbon
Lisbon
Lisbon is the capital city and largest city of Portugal with a population of 545,245 within its administrative limits on a land area of . The urban area of Lisbon extends beyond the administrative city limits with a population of 3 million on an area of , making it the 9th most populous urban...
in the person of the Marquês d'Abrantes. He completed his course of study at the University of Coimbra, devoting his attention principally to philology
Philology
Philology is the study of language in written historical sources; it is a combination of literary studies, history and linguistics.Classical philology is the philology of Greek and Classical Latin...
and mathematics
Mathematics
Mathematics is the study of quantity, space, structure, and change. Mathematicians seek out patterns and formulate new conjectures. Mathematicians resolve the truth or falsity of conjectures by mathematical proofs, which are arguments sufficient to convince other mathematicians of their validity...
, but received the title of Doctor of Canon Law (related to Theology). He is said to have had a remarkable memory and a great command of languages.

In 1709 he presented a petition to King John V of Portugal, seeking royal favour for his invention of an airship, in which he expressed the greatest confidence. The contents of this petition have been preserved, together with a picture and description of his airship
Airship
An airship or dirigible is a type of aerostat or "lighter-than-air aircraft" that can be steered and propelled through the air using rudders and propellers or other thrust mechanisms...
. Developing the ideas of Francesco Lana de Terzi
Francesco Lana de Terzi
Francesco Lana de Terzi was an Italian Jesuit, mathematician, naturalist and aeronautics pioneer...
, S.J., Gusmão wanted to spread a huge sail over a boat-like body like the cover of a transport wagon; the boat itself was to contain tubes through which, when there was no wind, air would be blown into the sail by means of bellows. The vessel was to be propelled by the agency of magnets which were to be encased in two hollow metal balls. The public test of the machine, which was set for June 24, 1709, did not take place. According to contemporary reports, however, Gusmão did make several less ambitious experiments with this machine, and was supposedly able to fly one 1 km over Lisbon
Lisbon
Lisbon is the capital city and largest city of Portugal with a population of 545,245 within its administrative limits on a land area of . The urban area of Lisbon extends beyond the administrative city limits with a population of 3 million on an area of , making it the 9th most populous urban...
, landing in Terreiro do Paço. 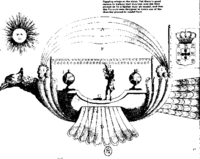 It is known that Gusmão was working on this principle at the public exhibition he gave before the Court on August 8, 1709, in the hall of the Casa da Índia
Casa da Índia
Casa da Índia was the Portuguese organization that managed all overseas territories during the heyday of the Portuguese Empire in the 16th century. It was both the central authority for managing all aspects of overseas trade, the central shipment point and clearing house...
in Lisbon, when he propelled a ball to the roof by combustion. The king rewarded the inventor by appointing him to a professorship at Coimbra
Coimbra
Coimbra is a city in the municipality of Coimbra in Portugal. Although it served as the nation's capital during the High Middle Ages, it is better-known for its university, the University of Coimbra, which is one of the oldest in Europe and the oldest academic institution in the...
and made him a canon
Canon (priest)
A canon is a priest or minister who is a member of certain bodies of the Christian clergy subject to an ecclesiastical rule ....
. He was also one of the fifty selected as members of the Academia Real de História, founded in 1720; and in 1722 he was made chaplain to the Court. Gusmão also busied himself with other inventions, but in the meantime continued his work on his airship schemes, the idea for which he is said to have conceived while a novice at Bahia. His experiments with designs for an aeroplane and a hot-air balloon led him to conceive a project for an actual airship, or rather a ship to sail in the air, consisting of a triangular gas-filled pyramid, but he died before he was able to build a craft to this design.

One account of Gusmão's work suggests that the Portuguese Inquisition
Portuguese Inquisition
The Portuguese Inquisition was formally established in Portugal in 1536 at the request of the King of Portugal, João III. Manuel I had asked for the installation of the Inquisition in 1515 to fulfill the commitment of marriage with Maria of Aragon, but it was only after his death that the Pope...
forbade him to continue his aeronautic investigations and persecuted him because of them, but this is probably a later invention. It dates however from at least the end of the 18th century, as the following article in the London Daily Universal Register(later The Times) of October 20, 1786, makes clear:

"By accounts from Lisbon we are assured, that in consequence of the experiments made there with the Montgolfier balloon, the literati of Portugal had been incited to make numerous researches on the subject; in consequence of which they pretend that the honour of the invention is due to Portugal. They say that in 1720, a Brazilian Jesuit, named Bartholomew Gusmao, possessed of abilities, imagination, and address, by permission of John V. fabricated a balloon in a place contiguous to the Royal Palace, and one day, in presence of their Majesties, and an immense crowd of spectators, raised himself, by means of a fire lighted in the machine, as high as the cornice of the building; but through the negligence and want of experience of those who held the cords, the machine took an oblique direction, and, touching the cornice, burst and fell.

The balloon was in the form of a bird with a tail and wings. The inventor proposed to make new experiments, but, chagrined at the raillery of the common people, who called him wizzard, and terrified by the Inquisition, he took the advice of his friends, burned his manuscripts, disguised himself, and fled to Spain, where he soon after died in an hospital.

They add, that several learned men, French and English, who had been at Lisbon to verify the fact, had made enquiries at the Carmelite monastery, where Gusmao had a brother, who had preserved some of his manuscripts on the manner of constructing aerostatic machines. Various living persons affirm that they were present at the Jesuit's experiments, and that he received the surname of Voador, or Flying-man."

Contemporary documents do attest that information was laid before the Inquisition against Gusmão, but on quite another charge. The inventor fled to Spain
Spain
Spain , officially the Kingdom of Spain languages]] under the European Charter for Regional or Minority Languages. In each of these, Spain's official name is as follows:;;;;;;), is a country and member state of the European Union located in southwestern Europe on the Iberian Peninsula...
and fell ill of a fever, of which he died in Toledo. He wrote: Manifesto summario para os que ignoram poderse navegar pelo elemento do ar (Short Manifesto for those who are unaware that is possible to sail through the element air, 1709); and Varios modos de esgotar sem gente as naus que fazem agua (Several ways of draining, without people, ships that leak water, 1710); some of his sermons also have been printed.