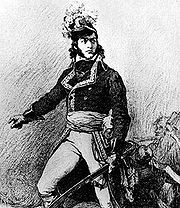 The son of an advocate, Joubert was born at Pont-de-Vaux
Pont-de-Vaux
Pont-de-Vaux is a commune in the Ain department in eastern France.-Population:-References:*...
(Ain
Ain
Ain is a department named after the Ain River on the eastern edge of France. Being part of the region Rhône-Alpes and bordered by the rivers Saône and Rhône, the department of Ain enjoys a privileged geographic situation...
), and ran away from school in 1784 to enlist in the artillery
Artillery
Originally applied to any group of infantry primarily armed with projectile weapons, artillery has over time become limited in meaning to refer only to those engines of war that operate by projection of munitions far beyond the range of effect of personal weapons...
. He was brought back and sent to study law at Lyon
Lyon
Lyon , is a city in east-central France in the Rhône-Alpes region, situated between Paris and Marseille. Lyon is located at from Paris, from Marseille, from Geneva, from Turin, and from Barcelona. The residents of the city are called Lyonnais....
and Dijon
Dijon
Dijon is a city in eastern France, the capital of the Côte-d'Or département and of the Burgundy region.Dijon is the historical capital of the region of Burgundy. Population : 151,576 within the city limits; 250,516 for the greater Dijon area....
. In 1791, during the French Revolutionary Wars
French Revolutionary Wars
The French Revolutionary Wars were a series of major conflicts, from 1792 until 1802, fought between the French Revolutionary government and several European states...
, he joined the French Revolutionary Army
French Revolutionary Army
The French Revolutionary Army is the term used to refer to the military of France during the period between the fall of the ancien regime under Louis XVI in 1792 and the formation of the First French Empire under Napoleon Bonaparte in 1804. These armies were characterised by their revolutionary...
regiment of the Ain, and was elected by his comrades successively corporal
Corporal
Corporal is a rank in use in some form by most militaries and by some police forces or other uniformed organizations. It is usually equivalent to NATO Rank Code OR-4....
and sergeant
Sergeant
Sergeant is a rank used in some form by most militaries, police forces, and other uniformed organizations around the world. Its origins are the Latin serviens, "one who serves", through the French term Sergent....
. In January 1792 he became Sous-lieutenant
Sub-Lieutenant
Sub-lieutenant is a military rank. It is normally a junior officer rank.In many navies, a sub-lieutenant is a naval commissioned or subordinate officer, ranking below a lieutenant. In the Royal Navy the rank of sub-lieutenant is equivalent to the rank of lieutenant in the British Army and of...
, and in November lieutenant
Lieutenant
A lieutenant is a junior commissioned officer in many nations' armed forces. Typically, the rank of lieutenant in naval usage, while still a junior officer rank, is senior to the army rank...
, having in the meantime experienced his first campaign with the army of Italy
French Revolutionary Wars: Campaigns of 1792
The French Revolutionary Wars began in 1792.-Preparations:France declared war on Austria on 20 April 1792. But Prussia and other powers had allied themselves with Austria in the expectation of conflict, and thus France faced a coalition and not a single power at the moment when the "emigration",...
.

In 1793, Joubert distinguished himself by the defence of a redoubt
Redoubt
A redoubt is a fort or fort system usually consisting of an enclosed defensive emplacement outside a larger fort, usually relying on earthworks, though others are constructed of stone or brick. It is meant to protect soldiers outside the main defensive line and can be a permanent structure or a...
at the Col de Tende
Col de Tende
Col de Tende is a high mountain pass in the Alps, on the border of France and Italy.It separates the Maritime Alps from the Ligurian Alps. It connects Nice and Tende in Alpes-Maritimes with Cuneo in Piedmont....
in northwest Italy, with only thirty men against a battalion
Battalion
A battalion is a military unit of around 300–1,200 soldiers usually consisting of between two and seven companies and typically commanded by either a Lieutenant Colonel or a Colonel...
of the enemy. Wounded and made prisoner in the battle, he was released on parole by the Austrian
Austrian Empire
The Austrian Empire was a modern era successor empire, which was centered on what is today's Austria and which officially lasted from 1804 to 1867. It was followed by the Empire of Austria-Hungary, whose proclamation was a diplomatic move that elevated Hungary's status within the Austrian Empire...
commander-in-chief, De Vins, soon afterwards. In 1794 he was again actively engaged, and in 1795 promoted to brigadier general
Brigadier General
Brigadier general is a senior rank in the armed forces. It is the lowest ranking general officer in some countries, usually sitting between the ranks of colonel and major general. When appointed to a field command, a brigadier general is typically in command of a brigade consisting of around 4,000...
.

In the campaign of 1796
French Revolutionary Wars: Campaigns of 1796
The French Revolutionary Wars continued from 1795, with the French in an increasingly strong position as members of the First Coalition made separate peaces. Austria and Great Britain were the main remaining members of the coalition...
, Joubert became part of Napoleon Bonaparte's overall command. He led a brigade under Pierre Augereau in the Battle of Millesimo
Battle of Millesimo
The Battle of Millesimo, fought on 13 and 14 April 1796, was the name that Napoleon Bonaparte gave in his correspondence to one of a series of small battles that were fought in Piedmont, Northern Italy between the armies of France and the allied armies of Austria and of the Kingdom of...
and under André Masséna
André Masséna
André Masséna 1st Duc de Rivoli, 1st Prince d'Essling was a French military commander during the Revolutionary and Napoleonic Wars....
at the Battle of Lodi
Battle of Lodi
The Battle of Lodi was fought on May 10, 1796 between French forces under General Napoleon Bonaparte and an Austrian rear guard led by Karl Philipp Sebottendorf at Lodi, Lombardy...
. He also fought at the Battle of Castiglione
Battle of Castiglione
The Battle of Castiglione saw the French Army of Italy under General Napoleon Bonaparte attack an army of Habsburg Austria led by Feldmarschall Dagobert Sigmund von Wurmser on 5 August 1796. The outnumbered Austrians were defeated and driven back along a line of hills to the river crossing at...
in August. He soon attracted the special attention of Napoleon Bonaparte, who made him a general of division in December 1796, and repeatedly selected him for the command of important detachments. Thus, he led the holding force in the Adige River valley at the Battle of Rivoli
Battle of Rivoli
The Battle of Rivoli was a key victory in the French campaign in Italy against Austria. Napoleon Bonaparte's 23,000 Frenchmen defeated an attack of 28,000 Austrians under Feldzeugmeister Jozsef Alvinczi, ending Austria's fourth and final attempt to relieve the Siege of Mantua...
. In the spring campaign of 1797 (invasion of Austria) he commanded the detached left wing of Bonaparte's army in the Tyrol
Tyrol (state)
Tyrol is a state or Bundesland, located in the west of Austria. It comprises the Austrian part of the historical region of Tyrol.The state is split into two parts–called North Tyrol and East Tyrol–by a -wide strip of land where the state of Salzburg borders directly on the Italian province of...
with great distinction, fighting his way through the mountains to rejoin his chief in Styria.

He subsequently held various commands in the Low Countries
Low Countries
The Low Countries are the historical lands around the low-lying delta of the Rhine, Scheldt, and Meuse rivers, including the modern countries of Belgium, the Netherlands, Luxembourg and parts of northern France and western Germany....
, on the Rhine and in the Italian Peninsula
Italian Peninsula
The Italian Peninsula or Apennine Peninsula is one of the three large peninsulas of Southern Europe , spanning from the Po Valley in the north to the central Mediterranean Sea in the south. The peninsula's shape gives it the nickname Lo Stivale...
, where up to January 1799 he served as commander in chief. Resigning the post in consequence of a dispute with the civil authorities, Joubert returned to France. There, he married (June 1799) Mlle de Montholon, daughter of Charles Louis Huguet de Sémonville, and future wife of Marshal Étienne Macdonald
Étienne-Jacques-Joseph-Alexandre MacDonald
Étienne Jacques Joseph Alexandre MacDonald, 1st duke of Taranto was a Marshal of France and military leader during the French Revolutionary and Napoleonic Wars.-Family background:...
. Joubert was almost immediately summoned to the field to stem a series of major French defeats in northern Italy. He took over the command in Italy from Jean Moreau
Jean Victor Marie Moreau
Jean Victor Marie Moreau was a French general who helped Napoleon Bonaparte to power, but later became a rival and was banished to the United States.- Early life :Moreau was born at Morlaix in Brittany...
about the middle of July 1799. He persuaded his predecessor to remain at the front, and was largely guided by his advice.

Joubert and Moreau were quickly compelled to give battle by their major adversary Aleksandr Suvorov, at the head of a joint Russian and Austrian army. The Battle of Novi was disastrous for the French, not only because it was a defeat, but also because Joubert himself was amongst the first to fall, shot through the heart ( Vucic infanterist from Ogulinska 3.pješadijske Regiment, killed the French commander, General Joubert).

Joubert had been marked out as a future great captain by Napoleon himself. After the battle, his remains were brought to Toulon
Toulon
Toulon is a town in southern France and a large military harbor on the Mediterranean coast, with a major French naval base. Located in the Provence-Alpes-Côte-d'Azur region, Toulon is the capital of the Var department in the former province of Provence....
and buried in Fort La Malgue, and the French Directory
French Directory
The Directory was a body of five Directors that held executive power in France following the Convention and preceding the Consulate...
paid tribute to his memory by a ceremony of public mourning (16 September 1799). A monument to Joubert at Bourg-en-Bresse
Bourg-en-Bresse
Bourg-en-Bresse is a commune in eastern France, capital of the Ain department, and was capital of the former province of Bresse . It is located north-northeast of Lyon.The inhabitants of Bourg-en-Bresse are known as Burgiens.-Geography:...
was razed by order of Louis XVIII
Louis XVIII of France
Louis XVIII , known as "the Unavoidable", was King of France and of Navarre from 1814 to 1824, omitting the Hundred Days in 1815...
, but another memorial was afterwards erected at Pont de Vaux.