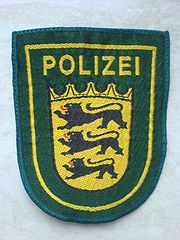 The four regional police authorities (called Landespolizeidirektionen in BW) are headquartered in Karlsruhe
Karlsruhe
The City of Karlsruhe is a city in the southwest of Germany, in the state of Baden-Württemberg, located near the French-German border.Karlsruhe was founded in 1715 as Karlsruhe Palace, when Germany was a series of principalities and city states...
, Stuttgart
Stuttgart
Stuttgart is the capital of the state of Baden-Württemberg in southern Germany. The sixth-largest city in Germany, Stuttgart has a population of 600,038 while the metropolitan area has a population of 5.3 million ....
, Freiburg
Freiburg
Freiburg im Breisgau is a city in Baden-Württemberg, Germany. In the extreme south-west of the country, it straddles the Dreisam river, at the foot of the Schlossberg. Historically, the city has acted as the hub of the Breisgau region on the western edge of the Black Forest in the Upper Rhine Plain...
and Tübingen
Tübingen
Tübingen is a traditional university town in central Baden-Württemberg, Germany. It is situated south of the state capital, Stuttgart, on a ridge between the Neckar and Ammer rivers.-Geography:...
. There is also a separate police authority for the city of Stuttgart. Following a police reform in 2005, the regional police authorities are now part of the regional government authorities (Regierungspräsidium). The autobahn
Autobahnpolizei
Autobahnpolizei is the term in Germany, Austria and the German-speaking parts of Switzerland for the highway patrol. Heavy traffic and high-speed accidents resulted in the creation of special police units to patrol the expressways known as Autobahnen....
and river police
Wasserschutzpolizei
The Wasserschutzpolizei is the water police that patrols the waterways, lakes and harbours of Germany around the clock. The WSP are part of the Landespolizei ....
stations were reorganized from separate authorities and integrated into the respective local police departments.

In 2007, the state government decided that the Baden-Württemberg Police will also change to blue uniforms and patrol vehicles. The uniform change-over will occur between 2009 and 2011 to minimize the cost of the conversion.

Citizens also participate in public safety. This commitment to civic action is seen, for example, in the Volunteer Police program, where approx. 1,200 citizens voluntarily assist their local police in 20 towns. These volunteers are specially trained, wear uniforms and are armed. Their main duty is crime prevention: conducting walking patrols to deter street crime, patrolling near schools and kindergartens and maintaining contact with potential victims of crime and juvenile delinquents.

The Landeskriminalamt
Landeskriminalamt
Landeskriminalamt - is the German term for a State Investigation Bureau in Germany. LKAs are part of the state police which, in turn, is directly subordinate to the respective state ministry of the interior.-Investigations:...
(State Investigation Bureau) was founded in 1952, is situated in Stuttgart and employs 520 officers and 430 civilian staff. Its missions are: witness protection, state security, SWAT
SWAT
A SWAT team is an elite tactical unit in various national law enforcement departments. They are trained to perform high-risk operations that fall outside of the abilities of regular officers...
(Spezialeinsatzkommando
Spezialeinsatzkommando
Spezialeinsatzkommandos are the special response units of the German state police forces. German SEKs are full-time units whose members do not perform any other duties, and are essentially the equivalent of American SWAT Teams...
) team operations, undercover investigations, statistics, monitoring the development of crime, crime prevention, criminal investigations analysis, exchange of information with foreign countries and forensic science.

The Police Support Group HQ (Bereitschaftspolizeipräsidium) in Göppingen is the recruiting and training agency for the BW police and controls five rapid reaction battalions (Bereitschaftspolizeidirektionen) (BPD), the SWAT team and the state police band. The BPDs are situated in Bruchsal
Bruchsal
Bruchsal is a city at the western edge of the Kraichgau, approximately 20 km northeast of Karlsruhe in the state of Baden-Württemberg, Germany...
, Göppingen
Göppingen
Göppingen is a town in southern Germany, part of the Stuttgart Region of Baden-Württemberg. It is the capital of the district Göppingen. It is situated at the bottom of the Hohenstaufen mountain, in the valley of the river Fils....
, Biberach
Biberach an der Riß
Biberach is a town in the south of Germany. It is the capital of Biberach district, in the Upper Swabia region of the German state of Baden-Württemberg...
, Lahr
Lahr
Lahr is a city in western Baden-Württemberg, Germany, approximately 38 km north of Freiburg in Breisgau and 100 km south of Karlsruhe...
and Böblingen
Böblingen
Böblingen is a town in Baden-Württemberg, Germany, seat of Böblingen District. Physically Sindelfingen and Böblingen are continuous.-History:Böblingen was founded by Count Wilhelm von Tübingen-Böblingen in 1253. Württemberg acquired the town in 1357, and on 12 May 1525 one of the bloodiest battles...
and have approx. 4,000 officers as the state’s mobile police reserve and school training staff.

There are eight river police stations in Baden-Württemberg along the Rhine and Neckar
Neckar
The Neckar is a long river, mainly flowing through the southwestern state of Baden-Württemberg, but also a short section through Hesse, in Germany. The Neckar is a major right tributary of the River Rhine...
rivers and on Lake Constance
Lake Constance
Lake Constance is a lake on the Rhine at the northern foot of the Alps, and consists of three bodies of water: the Obersee , the Untersee , and a connecting stretch of the Rhine, called the Seerhein.The lake is situated in Germany, Switzerland and Austria near the Alps...
. The aviation unit falls under LPD Stuttgart and has eight modern helicopters and one fixed-wing aircraft based at Stuttgart Airport
Stuttgart Airport
Stuttgart Airport is an international airport located approximately south of Stuttgart, Germany....
and Baden Airport
Baden Airpark
Baden Airpark , or officially Flughafen Karlsruhe/Baden-Baden, is an international airport located in Rheinmünster in the state of Baden-Württemberg in Germany, south of Karlsruhe, west of Baden-Baden and north of Strasbourg, France....
near Söllingen. Two of the helicopters are EC 155 transport versions and six are MD 900/902 police operation models. Three are equipped with night-sun and video/night-vision equipment. 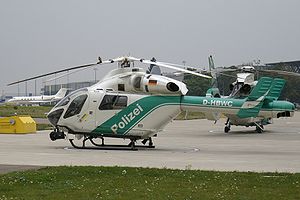