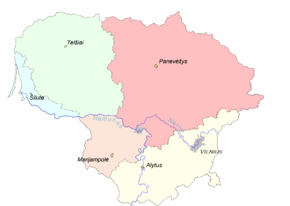 Aukštaitija is the name of one of five ethnographic regions of Lithuania
Regions of Lithuania
Lithuania can be divided into historical and cultural regions . The exact borders are not fully clear, as the regions are not official political or administrative units. They are delimited by culture, such as country traditions, traditional lifestyle, songs, tales, etc. To some extent regions...
. The name comes from the relatively high elevation of the region, particularly the eastern parts. 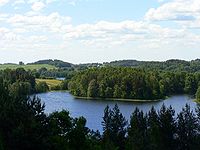 Aukštaitija is in the northeast part of Lithuania and also encompasses a small part of Latvia
Latvia
Latvia , officially the Republic of Latvia , is a country in the Baltic region of Northern Europe. It is bordered to the north by Estonia , to the south by Lithuania , to the east by the Russian Federation , to the southeast by Belarus and shares maritime borders to the west with Sweden...
and Belarus
Belarus
Belarus , officially the Republic of Belarus, is a landlocked country in Eastern Europe, bordered clockwise by Russia to the northeast, Ukraine to the south, Poland to the west, and Lithuania and Latvia to the northwest. Its capital is Minsk; other major cities include Brest, Grodno , Gomel ,...
. The largest city and, though not in any strict political sense, the considered capital of the region is Panevėžys
Panevežys
Panevėžys see also other names, is the fifth largest city in Lithuania. As of 2008, it occupied 50 square kilometers with 113,653 inhabitants. The largest multifunctional arena in Panevėžys is the Cido Arena...
, which has over 100,000 inhabitants. The largest cities (by population; those over 20,000 inhabitants) are:

The region is full of lakes, mainly in the eastern side.

The region has Russian
Russians
The Russian people are an East Slavic ethnic group native to Russia, speaking the Russian language and primarily living in Russia and neighboring countries....
and Belarusian
Belarusians
Belarusians ; are an East Slavic ethnic group who populate the majority of the Republic of Belarus. Introduced to the world as a new state in the early 1990s, the Republic of Belarus brought with it the notion of a re-emerging Belarusian ethnicity, drawn upon the lines of the Old Belarusian...
minorities in the east, dialects there therefore use more loan words from those languages. However the usage of dialects as in Lithuania in general, is decreasing.