Encyclopedia
The assassination
Assassination
To carry out an assassination is "to murder by a sudden and/or secret attack, often for political reasons." Alternatively, assassination may be defined as "the act of deliberately killing someone, especially a public figure, usually for hire or for political reasons."An assassination may be...
of Zoran Đinđić, the Prime Minister of Serbia
Serbia
Serbia , officially the Republic of Serbia , is a landlocked country located at the crossroads of Central and Southeast Europe, covering the southern part of the Carpathian basin and the central part of the Balkans...
, took place on Wednesday, March 12, 2003, in Belgrade
Belgrade
Belgrade is the capital and largest city of Serbia. It is located at the confluence of the Sava and Danube rivers, where the Pannonian Plain meets the Balkans. According to official results of Census 2011, the city has a population of 1,639,121. It is one of the 15 largest cities in Europe...
, Serbia and Montenegro
Serbia and Montenegro
Serbia and Montenegro was a country in southeastern Europe, formed from two former republics of the Socialist Federal Republic of Yugoslavia : Serbia and Montenegro. Following the breakup of Yugoslavia, it was established in 1992 as a federation called the Federal Republic of Yugoslavia...
.

The assassination of Đinđić was preceded by several unsuccessful attempts on his life. Most notable was in February 2003, in which a truck driven by Dejan Milenković (known as Bagzi, a member of the criminal Zemun Clan
Zemun Clan
The Zemun Clan is one of the Belgrade clans of the Serbian Mafia. The name is based on the base of the clan i.e. Zemun, a municipality of Belgrade....
) tried to force the Prime Minister's car off the highway in New Belgrade
Novi Beograd
Novi Beograd or New Belgrade is the most populous municipality that constitutes the City of Belgrade, the capital of Serbia. It is a planned city, built in 1947 on the left bank of the Sava river which was previously an uninhabited area, opposite of the old Belgrade...
. Đinđić escaped injury only due to the outstanding reaction of his driver and his security detail. Milenković was arrested, but released from custody after only a few days. The investigative court explained this decision by stating that Milenković was a salesman whose business suffered from his absence.

Đinđić had made many enemies for his reformist economic policies, clampdown on organised crime, and his pro-Western stance (chiefly relinquishing Slobodan Milošević
Slobodan Milošević
Slobodan Milošević was President of Serbia and Yugoslavia. He served as the President of Socialist Republic of Serbia and Republic of Serbia from 1989 until 1997 in three terms and as President of the Federal Republic of Yugoslavia from 1997 to 2000...
to the ICTY
International Criminal Tribunal for the former Yugoslavia
The International Tribunal for the Prosecution of Persons Responsible for Serious Violations of International Humanitarian Law Committed in the Territory of the Former Yugoslavia since 1991, more commonly referred to as the International Criminal Tribunal for the former Yugoslavia or ICTY, is a...
). The murder was allegedly organised by Dušan Spasojević and Milorad Ulemek
Milorad Ulemek
Milorad "Legija" Ulemek , also known as Milorad Luković is a former commander of the Serbian secret police special unit, the Red Berets , convicted of the assassinations of Serbian Prime Minister Zoran Djindjic and former Serbian President Ivan Stambolic and organiser of the attempted murder of the...
, also known as Legija. Ulemek is an ex-commander of the special police unit founded by Milošević's secret service during the 1990s, who ordered Zvezdan Jovanović
Zvezdan Jovanovic
Zvezdan Jovanović , also known as Zveki and Zmija assassinated former Serbian Prime Minister Zoran Đinđić on 12 March 2003....
to carry out the assassination. Legija was connected to the powerful Zemun clan of the Serbian mafia
Serbian mafia
Serbian Organized Crime or Naša Stvar are various criminal organizations based in Serbia or composed of ethnic Serbs in the Serbian Diaspora. Serbian mafiosos are very active in European Union countries...
, and had been recently sentenced to 40 years in jail for other offences that included murder and attempted murder. 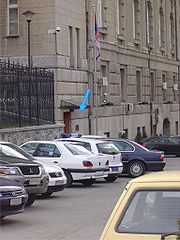 At 12:25 Central European Time
Central European Time
Central European Time , used in most parts of the European Union, is a standard time that is 1 hour ahead of Coordinated Universal Time . The time offset from UTC can be written as +01:00...
, Đinđić was fatally wound
Wound
A wound is a type of injury in which skin is torn, cut or punctured , or where blunt force trauma causes a contusion . In pathology, it specifically refers to a sharp injury which damages the dermis of the skin.-Open:...
ed by gunshot
Gunshot
A gunshot is the discharge of a firearm, producing a mechanical sound effect and a chemical gunshot residue. The term can also refer to a gunshot wound caused by such a discharge. Multiple discharges of a firearm or firearms are referred to as gunfire. The word can connotate either the sound of a...
while walking to the main Serbian government building to meet the Foreign Minister
Minister for Foreign Affairs (Sweden)
The Minister for Foreign Affairs is the foreign minister of Sweden and the head of the Ministry for Foreign Affairs.The office was instituted in 1809 as a result of the constitutional Instrument of Government promulgated in the same year. Until 1876 the office was called Prime Minister for Foreign...
of Sweden
Sweden
Sweden , officially the Kingdom of Sweden , is a Nordic country on the Scandinavian Peninsula in Northern Europe. Sweden borders with Norway and Finland and is connected to Denmark by a bridge-tunnel across the Öresund....
, Anna Lindh
Anna Lindh
Ylva Anna Maria Lindh was a Swedish Social Democratic politician, Chairman of the Social Democratic Youth League 1984-1990, Member of Parliament 1982-1985 and 1998-2003...
, and her colleague Jan O. Karlsson
Jan O. Karlsson
Jan Olov Karlsson , Swedish politician, former President of the European Court of Auditors, and former Minister for Development Cooperation, Migration and Asylum Policy from 2002 and from September 11, 2003 to October 10, 2003 acting Minister for Foreign Affairs, following the murder of Anna...
. According to the official government statement, Đinđić was not conscious and did not have a pulse upon arriving at the emergency ward. His bodyguard Milan Veruović was also seriously wounded in the stomach by another shot.

Đinđić's assassin
Assassination
To carry out an assassination is "to murder by a sudden and/or secret attack, often for political reasons." Alternatively, assassination may be defined as "the act of deliberately killing someone, especially a public figure, usually for hire or for political reasons."An assassination may be...
, police specialist Zvezdan Jovanović
Zvezdan Jovanovic
Zvezdan Jovanović , also known as Zveki and Zmija assassinated former Serbian Prime Minister Zoran Đinđić on 12 March 2003....
(also known as Zveki), fired the bullets from the window of a building approximately 180 meters away, using a sniper
Sniper
A sniper is a marksman who shoots targets from concealed positions or distances exceeding the capabilities of regular personnel. Snipers typically have specialized training and distinct high-precision rifles....
version of the Heckler & Koch G3
Heckler & Koch G3
The G3 is a 7.62mm battle rifle developed in the 1950s by the German armament manufacturer Heckler & Koch GmbH in collaboration with the Spanish state-owned design and development agency CETME ....
battle rifle
Battle rifle
A battle rifle is a military service rifle that fires a full power rifle cartridge, such as 7.62x51mm NATO. While the designation of battle rifle is usually given to post-World War II select fire infantry rifles such as the H&K G3, the FN FAL or the M14, this term can also apply to older military...
. Jovanović was born in 1965 in Peć
Pec
Peć or Pejë is a city and municipality in north-western Kosovo and Metohija - Serbia, and the administrative centre of the homonymous district. Governor of city is Ali Berisha....
, Kosovo
Kosovo
Kosovo is a region in southeastern Europe. Part of the Ottoman Empire for more than five centuries, later the Autonomous Province of Kosovo and Metohija within Serbia...
. He had been a member of the JSO, or the Red Berets, as people called them, and held the police rank of Lieutenant Colonel
Lieutenant colonel
Lieutenant colonel is a rank of commissioned officer in the armies and most marine forces and some air forces of the world, typically ranking above a major and below a colonel. The rank of lieutenant colonel is often shortened to simply "colonel" in conversation and in unofficial correspondence...
. Jovanović was active in the series of Yugoslav wars
Yugoslav wars
The Yugoslav Wars were a series of wars, fought throughout the former Yugoslavia between 1991 and 1995. The wars were complex: characterized by bitter ethnic conflicts among the peoples of the former Yugoslavia, mostly between Serbs on the one side and Croats and Bosniaks on the other; but also...
in the 1990s and stated he killed Đinđić because he saw him as a traitor to Serbia.