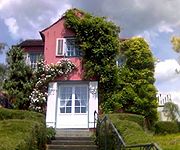 Anna Elisabeth von Droste-Hülshoff, known as Annette von Droste-Hülshoff (aˈnɛtə fɔn ˈdʁɔstəˈhʏlshɔf; January 10, 1797 – May 24, 1848), was a 19th century German
Germany
Germany , officially the Federal Republic of Germany , is a federal parliamentary republic in Europe. The country consists of 16 states while the capital and largest city is Berlin. Germany covers an area of 357,021 km2 and has a largely temperate seasonal climate...
author, and one of the most important German poets.

She was born at the family castle Burg Hülshoff (now a part of Havixbeck
Havixbeck
Havixbeck is a municipality at the north-east edge of the Baumberge in the district of Coesfeld, in northern North Rhine-Westphalia, Germany. It is located approx. 15 km west of Münster.- Geographical Location :...
) inside the Prince-Bishopric of Münster into an aristocrat
Aristocracy (class)
The aristocracy are people considered to be in the highest social class in a society which has or once had a political system of Aristocracy. Aristocrats possess hereditary titles granted by a monarch, which once granted them feudal or legal privileges, or deriving, as in Ancient Greece and India,...
ic, Catholic
Catholic
The word catholic comes from the Greek phrase , meaning "on the whole," "according to the whole" or "in general", and is a combination of the Greek words meaning "about" and meaning "whole"...
family of Westphalia
Westphalia
Westphalia is a region in Germany, centred on the cities of Arnsberg, Bielefeld, Dortmund, Minden and Münster.Westphalia is roughly the region between the rivers Rhine and Weser, located north and south of the Ruhr River. No exact definition of borders can be given, because the name "Westphalia"...
. She was educated by private tutors and began to write as a child. Her earliest poems are derivative and conventional but in 1820 her work began to show marked originality when she embarked on a cycle of religious poems, Das geistliche Jahr ("The Spiritual Year"). Droste intended to write one poem for each Sunday and Feast Day of the church year and the cycle was meant to please her devout grandmother, but when Droste had completed 25 poems, she realised they were too personal and showed too many traces of spiritual doubt, so she shelved the work until 1839 when a friend persuaded her to complete the series. Even then she did not publish the poems and they were only offered to the public posthumously in 1851.

In the summer of 1820 Droste became emotionally involved with two men, Heinrich Straube and August von Arnswaldt, but both ended by rejecting her. When her father died in 1826 she moved with her mother and sister to a small house in the country called Rüschhaus. Here she composed more poetry, but not prolifically, publishing her first collection in 1838. It contained three narrative poems (Das Hospiz auf dem großem Saint-Bernard, Das Vermächtnis des Arztes and Die Schlacht in Loener Bruch) and a handful of lyrics. Although they were issued under the name "Annette Elisabeth von D.H.", her family did not approve.

The year 1840 marked a turning point in her career, however. The 26-year-old poet Levin Schücking
Levin Schücking
Levin Schücking was a German novelist. He was the uncle of Levin Ludwig Schücking.-Biography:Born into the Westphalian nobility on the estate of Klemenswerth, near Meppen, his mother, Sibilla Katharina née Busch was a poet who occasionally published, whilst his father was Paulus Modestus Schücking...
had published an admiring review of Droste's collection and sought her help in writing his own book, Das malerische und romantische Westfalen. The two soon formed a close friendship and Droste wrote a number of ballads for inclusion in the book. Schücking encouraged her renewed literary creativity. In the winter of 1840—1841 she wrote her famous novella Die Judenbuche
Die Judenbuche
Die Judenbuche is a novella written by Annette von Droste-Hülshoff and first published in 1842. The beech tree becomes a significant symbol in the story....
(published 1842). The following autumn and winter, Droste and Schücking stayed at her brother-in-law, Baron Joseph Maria Christoph von Lassberg
Baron Joseph Maria Christoph von Lassberg
Baron Joseph Maria Christoph von Lassberg was a German antiquary. He was descended from a pious Catholic family. His father was chief forester in the service of Prince von Furstenberg. After a brief service in the army, he entered the University of Strasbourg and later that of Freiburg im Br...
's, castle on Lake Constance
Lake Constance
Lake Constance is a lake on the Rhine at the northern foot of the Alps, and consists of three bodies of water: the Obersee , the Untersee , and a connecting stretch of the Rhine, called the Seerhein.The lake is situated in Germany, Switzerland and Austria near the Alps...
. Here Schücking told her that her talent lay in lyric poetry, which relied on rare moments of inspiration. Droste disagreed: she had no problem composing poetry in her head but had difficulty writing it down and the failure of her first book (it had sold only around a hundred copies) had not encouraged her to make the effort. Now she had a sympathetic reader in
Schücking, she began to write in earnest, producing about fifty poems between October 1841 and April 1842. Many were inspired by the Westphalian countryside around her. These and other poems were collected in Gedichte, issued by Cotta in 1844. This time Droste used her full name on the title page. The profits enabled her to buy a small house near Meersburg
Meersburg
Meersburg is a town of Baden-Württemberg in the southwest of Germany at Lake Constance.It is famous for its charming medieval city. The lower town and upper town are reserved for pedestrians only and connected by two stairways and a steep street .-History:The name of the town means "Burg on the...
, where she lived from 1846 until her death in May 1848, probably from tuberculosis
Tuberculosis
Tuberculosis, MTB, or TB is a common, and in many cases lethal, infectious disease caused by various strains of mycobacteria, usually Mycobacterium tuberculosis. Tuberculosis usually attacks the lungs but can also affect other parts of the body...
. Her final poems appeared posthumously in the collection Letzte Gaben, edited by Schücking.


Character of her poetry

The critic Margaret Atkinson wrote: "In the history of German poetry she is an isolated and independent figure. She shares with the Romantic writers an awareness of the power of man's imagination and a keen sense of his exposed and precarious position in a world of danger and mystery. But her poetry has none of the vagueness of emotional mood and the sweetness of sound that characterize theirs. Nor did she intend that it should. Indifferent to contemporary taste, she pursued her own ideals in her own way. 'Ich mag und will jetzt nicht berühmt werden,' she once wrote, 'aber nach hundert Jahre möcht ich gelesen werden.'
And indeed she was ahead of her time. Her keen sensory perception and her precise recording of phenomena make her appear as a herald of the new realistic literature of the latter part of the century. With her unusual combination of imaginative vision with close accurate observation and depiction of reality, she thus stands at the point of transition between Romanticism and Realism and does not belong wholly to either."