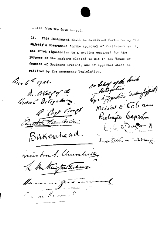 Of the 125 Teachtaí Dála
Teachta Dála
A Teachta Dála , usually abbreviated as TD in English, is a member of Dáil Éireann, the lower house of the Oireachtas . It is the equivalent of terms such as "Member of Parliament" or "deputy" used in other states. The official translation of the term is "Deputy to the Dáil", though a more literal...
(TDs), 121 cast their vote in the Dáil. The Ceann Comhairle
Ceann Comhairle
The Ceann Comhairle is the chairman of Dáil Éireann, the lower house of the Oireachtas of Ireland. The person who holds the position is elected by members of the Dáil from among their number in the first session after each general election...
Eoin MacNeill
Eoin MacNeill
Eoin MacNeill was an Irish scholar, nationalist, revolutionary and politician. MacNeill is regarded as the father of the modern study of early Irish medieval history. He was a co-founder of the Gaelic League, to preserve Irish language and culture, going on to establish the Irish Volunteers...
(Londonderry
Londonderry (Northern Ireland Parliament constituency)
Londonderry was a county constituency of the Parliament of Northern Ireland from 1921 - 1929. It returned five MPs, using the single transferable vote method of proportional representation.-Boundaries:...
and National University of Ireland
National University of Ireland (constituency)
National University of Ireland is a parliamentary constituency in Ireland, through which graduates of the National University of Ireland have elected members of various legislative bodies including currently Seanad Éireann.-Summary:...
) absented himself from the vote in accordance with standing orders. It was ruled that the four other TDs, Michael Collins
Michael Collins (Irish leader)
Michael "Mick" Collins was an Irish revolutionary leader, Minister for Finance and Teachta Dála for Cork South in the First Dáil of 1919, Director of Intelligence for the IRA, and member of the Irish delegation during the Anglo-Irish Treaty negotiations. Subsequently, he was both Chairman of the...
, Arthur Griffith
Arthur Griffith
Arthur Griffith was the founder and third leader of Sinn Féin. He served as President of Dáil Éireann from January to August 1922, and was head of the Irish delegation at the negotiations in London that produced the Anglo-Irish Treaty of 1921.-Early life:...
, Éamon de Valera
Éamon de Valera
Éamon de Valera was one of the dominant political figures in twentieth century Ireland, serving as head of government of the Irish Free State and head of government and head of state of Ireland...
and Seán Milroy
Seán Milroy
Seán Milroy was an Irish politician. He was born in Maryport in Cumberland. He was a journalist by profession.He contested a by-election for Sinn Féin in Tyrone North East unsuccessfully. He was elected a Sinn Féin Teachta Dála at the 1921 elections for both the Cavan constituency and for the...
, who had been elected for two constituencies (for both the House of Commons of Southern Ireland and the House of Commons of Northern Ireland
House of Commons of Northern Ireland
The House of Commons of Northern Ireland was the lower house of the Parliament of Northern Ireland created under the Government of Ireland Act 1920. The upper house in the bicameral parliament was called the Senate. It was abolished with the passing of the Northern Ireland Constitution Act...
) would only cast one vote each, and three TDs abstained. The result of the vote was:


Prior to the vote, all TDs were members of the Sinn Féin
Sinn Féin
Sinn Féin is a left wing, Irish republican political party in Ireland. The name is Irish for "ourselves" or "we ourselves", although it is frequently mistranslated as "ourselves alone". Originating in the Sinn Féin organisation founded in 1905 by Arthur Griffith, it took its current form in 1970...
party. Sinn Féin split into pro-Treaty and anti-Treaty sides in the aftermath of the Treaty vote. (See Sinn Féin Treaty split).

Frank Drohan had resigned before the vote even came up; Laurence Ginnell (anti-Treaty) was absent and Thomas Kelly (pro-Treaty) was ill