Encyclopedia
Altlußheim is a municipality
Municipalities of Germany
Municipalities are the lowest level of territorial division in Germany. This may be the fourth level of territorial division in Germany, apart from those states which include Regierungsbezirke , where municipalities then become the fifth level.-Overview:With more than 3,400,000 inhabitants, the...
in Baden-Württemberg
Baden-Württemberg
Baden-Württemberg is one of the 16 states of Germany. Baden-Württemberg is in the southwestern part of the country to the east of the Upper Rhine, and is the third largest in both area and population of Germany's sixteen states, with an area of and 10.7 million inhabitants...
and belongs to Rhein-Neckar-Kreis
Rhein-Neckar-Kreis
Rhein-Neckar-Kreis is a district in the northwest of Baden-Württemberg, Germany. Neighboring districts are Bergstraße, Odenwaldkreis, Neckar-Odenwald, Heilbronn, Karlsruhe, district-free Speyer, the Rhein-Pfalz-Kreis, and district-free Mannheim and Heidelberg.-History:The district was created in...
.

Altlußheim sits in the Rhine rift directly on the right bank of a meander
Meander
A meander in general is a bend in a sinuous watercourse. A meander is formed when the moving water in a stream erodes the outer banks and widens its valley. A stream of any volume may assume a meandering course, alternately eroding sediments from the outside of a bend and depositing them on the...
ing of the Rhine, where the Kriegbach
Kriegbach
Kriegbach is a river of Baden-Württemberg, Germany.-See also:*List of rivers of Baden-Württemberg...
flows into the Rhine.

West of the municipality, on the opposite side of the Rhine in the Rhineland-Palatinate
Rhineland-Palatinate
Rhineland-Palatinate is one of the 16 states of the Federal Republic of Germany. It has an area of and about four million inhabitants. The capital is Mainz. English speakers also commonly refer to the state by its German name, Rheinland-Pfalz ....
is the city of Speyer
Speyer
Speyer is a city of Rhineland-Palatinate, Germany with approximately 50,000 inhabitants. Located beside the river Rhine, Speyer is 25 km south of Ludwigshafen and Mannheim. Founded by the Romans, it is one of Germany's oldest cities...
. Altlußheim is connected to Speyer by federal highway (Bundesstraße
Bundesstraße
Bundesstraße , abbreviated B, is the denotation for German and Austrian national highways.-Germany:...
) B 39. Less than a kilometer to the East lies Neulußheim
Neulußheim
Neulußheim is a town in the district of Rhein-Neckar in Baden-Württemberg in Germany....
. To the South is Oberhausen-Rheinhausen
Oberhausen-Rheinhausen
Oberhausen-Rheinhausen is a town in Northern Karlsruhe County in Baden-Württemberg, Germany.-External links:*...
. To the North-East Altlußheim borders on Hockenheim
Hockenheim
Hockenheim is a German town in northwest Baden-Württemberg, about 20 km south of Mannheim. It is located in the Upper Rhine valley on the touristical theme routes Baden Asparagus Route and Bertha Benz Memorial Route...
.

Lußheim was originally a fishing settlement on the Roman road
Roman road
The Roman roads were a vital part of the development of the Roman state, from about 500 BC through the expansion during the Roman Republic and the Roman Empire. Roman roads enabled the Romans to move armies and trade goods and to communicate. The Roman road system spanned more than 400,000 km...
. The residents lived from fishing in the waters of the meander
Meander
A meander in general is a bend in a sinuous watercourse. A meander is formed when the moving water in a stream erodes the outer banks and widens its valley. A stream of any volume may assume a meandering course, alternately eroding sediments from the outside of a bend and depositing them on the...
ings of the Rhine. At the highest point in the village, there was a heathen temple. Later a church was built on the same ground.

In the year 496/497, the Franks
Franks
The Franks were a confederation of Germanic tribes first attested in the third century AD as living north and east of the Lower Rhine River. From the third to fifth centuries some Franks raided Roman territory while other Franks joined the Roman troops in Gaul. Only the Salian Franks formed a...
attacked the local ruling Allemanni and drove them back to the Murg
Murg
The Murg is a river and right tributary of the Rhine in Baden-Württemberg, Germany.-Source:The river has numerous tributaries and is known as the Murg only from the point of confluence of the rivers Rechtmurg and Rotmurg in the community of Obertal, a part of Baiersbronn...
. Lußheim is without a doubt a Frankish settlement. Proof lies in -heim in the name of the community, as well as the typically Frankish homesteads which still exist to this day, namely the homesteads at Rheinhäuser Straße 8 and Hauptstraße 74. Also the row graves that have been found also suggest the beginnings of the Ripuarian Franks
Ripuarian Franks
Ripuarian Franks is a distinction of the Frankish people made by a number of writers in the Latin language of the first several centuries of the Christian Era...
. Geographically speaking, Altlußheim is in the middle of ripuarian-Frankish territory, a subdivision of Greater Franconia of the Middle Ages
Middle Ages
The Middle Ages is a periodization of European history from the 5th century to the 15th century. The Middle Ages follows the fall of the Western Roman Empire in 476 and precedes the Early Modern Era. It is the middle period of a three-period division of Western history: Classic, Medieval and Modern...
. Politically, Loszem (the name of Lußheim at that time) belonged to the duchy of the ripuarian Franks. Lußheim was first mentioned in documents in 946, in which Lußheim was given to bishop Reginald I of Speyer from duke Konrad, in order to found Maulbronn Abbey
Maulbronn Abbey
Maulbronn Monastery is the best-preserved medieval Cistercian monastery complex in Europe. It is situated on the outskirts of Maulbronn, Baden-Württemberg, Germany and is separated from the town by fortifications. Since 1993 the monastery is part of the Unesco World Heritage.- History :The...
. The Maulbronn Abbey had full rights over all Schultheiß (sheriff
Sheriff
A sheriff is in principle a legal official with responsibility for a county. In practice, the specific combination of legal, political, and ceremonial duties of a sheriff varies greatly from country to country....
or reeve
Vogt
A Vogt ; plural Vögte; Dutch voogd; Danish foged; ; ultimately from Latin [ad]vocatus) in the Holy Roman Empire was the German title of a reeve or advocate, an overlord exerting guardianship or military protection as well as secular justice...
), citizens, and serfs. The abbey was entitled to the greater tithe
Tithe
A tithe is a one-tenth part of something, paid as a contribution to a religious organization or compulsory tax to government. Today, tithes are normally voluntary and paid in cash, cheques, or stocks, whereas historically tithes were required and paid in kind, such as agricultural products...
on parish and town incomes.

At this time, a large proportion of the population were serfs of the Maulbronn Abbey. This was the case until the middle of the 18th century. According to one document, the time between 1689 and 1692 was quite turbulent. The village was plundered and put to the torch by enemy soldiers many times. In 1692 the village had 18 burghers, 13 widows, and 28 orphans. Two thirds of the villages and the Schultheiß Johann Konrad Zeitern were murdered by enemy soldiers. The church, the pastor's house, the city hall, and most of the houses and barns were burned to the ground.

At the time of the construction of the Speyer Cathedral
Speyer Cathedral
The Speyer Cathedral, officially the Imperial Cathedral Basilica of the Assumption and St Stephen, in Latin: Domus sanctae Mariae Spirae in Speyer, Germany, is the seat of the Roman Catholic Bishop of Speyer and is suffragan to the Archdiocese of Bamberg. The cathedral, which is dedicated to St...
in 1774, Lußheim was required to quarry, bake, and deliver 200,000 bricks. From 1804 to 1882, as the Rhine levee was built to Speyer and the green drainage was carried out, a lot of land could be made farmable. Many large farms were created. At this time, they began clearing the land where Neulußheim was to be. In 1803, after taking away the area that was to be Neulußheim, Altlußheim had 2133 morgen
Morgen
A morgen was a unit of measurement of land in Germany, the Netherlands, Poland and the Dutch colonies, including South Africa and Taiwan. The size of a morgen varies from 1/2 to 2½ acres, which equals approximately 0.2 to 1 ha...
of land, 903 morgen of fields (about three quarters of which for planting and another quarter for grazing), 205 morgen of community forest, 100 morgen of Rhine forest, and 925 morgen of private forest.

Through the treaty that formed the Confederation of the Rhine
Confederation of the Rhine
The Confederation of the Rhine was a confederation of client states of the First French Empire. It was formed initially from 16 German states by Napoleon after he defeated Austria's Francis II and Russia's Alexander I in the Battle of Austerlitz. The Treaty of Pressburg, in effect, led to the...
, Rheinbundakte, Lußheim became a part of the newly formed grand duchy
Grand duchy
A grand duchy, sometimes referred to as a grand dukedom, is a territory whose head of state is a monarch, either a grand duke or grand duchess.Today Luxembourg is the only remaining grand duchy...
of Baden
Baden
Baden is a historical state on the east bank of the Rhine in the southwest of Germany, now the western part of the Baden-Württemberg of Germany....
. In 1821 the settlement Neulußheim
Neulußheim
Neulußheim is a town in the district of Rhein-Neckar in Baden-Württemberg in Germany....
became independent. To avoid confusion Lußheim was renamed Altlußheim.

The original fishing village, Lußheim, became important due to the establishment of a ferry. Lußheim had the right to appoint the ferry master (called Fergenmeister) for Lußheim and Ketsch
Ketsch
Ketsch is a municipality in the district of Rhein-Neckar-Kreis, in Baden-Württemberg, Germany, located on Bertha Benz Memorial Route. It is situated on the right bank of the Rhine, 13 km south of Mannheim....
. At that time, running the ferry crossing had economic value for the people in Altlußheim. In 1840 a pontoon bridge
Pontoon bridge
A pontoon bridge or floating bridge is a bridge that floats on water and in which barge- or boat-like pontoons support the bridge deck and its dynamic loads. While pontoon bridges are usually temporary structures, some are used for long periods of time...
was erected, which was replaced in 1938 with a rail and road bridge. This bridge was blown up in 1945 at the end of the Second World War. 1955 the Salier-Brücke (Salian Bridge) was built at the same location. This road bridge connects to Speyer. In the 1970s, north of Speyer, a pylon bridge was built for the A 61
Bundesautobahn 61
is an autobahn in Germany that connects the border to the Netherlands near Venlo in the northwest to the interchange with A 6 near Hockenheim. In 1965, this required a re-design of the Hockenheimring....
.

Until 31 December 1972, Altlußheim belonged to Mannheim
Mannheim
Mannheim is a city in southwestern Germany. With about 315,000 inhabitants, Mannheim is the second-largest city in the Bundesland of Baden-Württemberg, following the capital city of Stuttgart....
. Since then Altlußheim is part of the Rhein-Neckar-Kreis.

The blazon is sable with a lion or with claws and tongue gules rampant behind a base trio of hill vert and grasping a leafed-staff or.

The coat of arms is based on a mistake. Altlußheim never belonged to the Palatinate of the Rhine, which is symbolized by the lion.
A seal from some time after 1513 shows the rump of an ass. This indicates the fealty to Maulbronn Abbey and therewith to the duchy of Württemberg. The confusion arose from a poor quality colored stamp which the community used in the 19th century. On the recommendation of the general archive of the state, Altlußheim adopted the current coat of arms in 1900.

The flag is yellow and black and was awarded by the Ministry of the Interior on 16 May 1959. 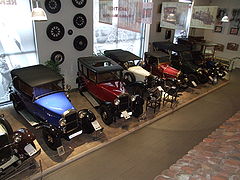