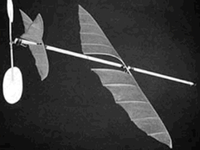 Alphonse Pénaud was a 19th-century French
France
The French Republic , The French Republic , The French Republic , (commonly known as France , is a unitary semi-presidential republic in Western Europe with several overseas territories and islands located on other continents and in the Indian, Pacific, and Atlantic oceans. Metropolitan France...
pioneer of aviation
Aviation
Aviation is the design, development, production, operation, and use of aircraft, especially heavier-than-air aircraft. Aviation is derived from avis, the Latin word for bird.-History:...
, inventor of the rubber powered model airplane Planophore and founder of the aviation industry.

Pénaud was born in Paris
Paris
Paris is the capital and largest city in France, situated on the river Seine, in northern France, at the heart of the Île-de-France region...
into a family of sailors. His father was an admiral. Because of health problems, he was not able to attend the Naval School. At 20, he began studying aviation and joined the Société aéronautique de France. He became vice-president of the society in 1876 and participated in the publication of the journal L'Aéronaute.

He built and sold ornithopter
Ornithopter
An ornithopter is an aircraft that flies by flapping its wings. Designers seek to imitate the flapping-wing flight of birds, bats, and insects. Though machines may differ in form, they are usually built on the same scale as these flying creatures. Manned ornithopters have also been built, and some...
s as well as propeller
Propeller
A propeller is a type of fan that transmits power by converting rotational motion into thrust. A pressure difference is produced between the forward and rear surfaces of the airfoil-shaped blade, and a fluid is accelerated behind the blade. Propeller dynamics can be modeled by both Bernoulli's...
-driven models, and with Paul Gauchot designed an amphibious monoplane with retractable undercarriage
Undercarriage
The undercarriage or landing gear in aviation, is the structure that supports an aircraft on the ground and allows it to taxi, takeoff and land...
. Alphonse Penaud was unable to obtain financial backing for his amphibious monoplane design and committed suicide at age 30.

In 1878 Milton Wright gave his two younger sons, Wilbur and Orville, a toy "helicopter" which was based on a design of Pénaud and the earlier British aviation scientist Sir George Cayley. In their adult years, the Wright brothers
Wright brothers
The Wright brothers, Orville and Wilbur , were two Americans credited with inventing and building the world's first successful airplane and making the first controlled, powered and sustained heavier-than-air human flight, on December 17, 1903...
cited these toys as an early inspiration for their interest in flight. They were pioneers in aviation.
The source of this article is wikipedia, the free encyclopedia.  The text of this article is licensed under the GFDL.