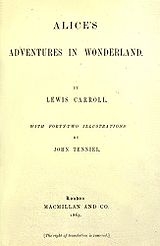 All in the golden afternoon Full leisurely we glide; For both our oars, with little skill, By little arms are plied, While little hands make vain pretense Our wanderings to guide.

Thus grew the tale of Wonderland: Thus slowly, one by one, Its quaint events were hammered out — And now our tale is done And home we steer, a merry crew, Beneath the setting sun.

Alice! a childish story take, And with a gentle hand Lay it where Childhood's dreams are twined In Memory's mystic band, Like pilgrim's withered wreath of flowers Plucked in a far-off land.

There was nothing so very remarkable in that; nor did Alice think it so very much out of the ordinary to hear the Rabbit say to itself 'Oh dear! Oh dear! I shall be too late!' ...but when the Rabbit actually took a watch out its waistcoat pocket, and looked at it, and then hurried on, Alice startled to her feet.

After a fall such as this, I shall think nothing of tumbling downstairs!

If you drink much from a bottle marked 'poison' it is almost certain to disagree with you, sooner or later.

Well, if I eat it, and if it makes me grow larger, I can reach the key; and if makes me grow smaller, I can creep under the door: so either way I'll get into the garden, and I don't care which happens!