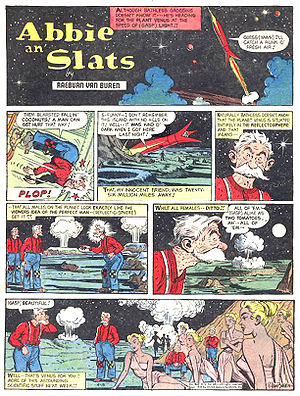 Abbie an' Slats is an American
United States
The United States of America is a federal constitutional republic comprising fifty states and a federal district...
comic strip
Comic strip
A comic strip is a sequence of drawings arranged in interrelated panels to display brief humor or form a narrative, often serialized, with text in balloons and captions....
which ran from July 12, 1937 to January 30, 1971, initially written by Al Capp
Al Capp
Alfred Gerald Caplin , better known as Al Capp, was an American cartoonist and humorist best known for the satirical comic strip Li'l Abner. He also wrote the comic strips Abbie an' Slats and Long Sam...
and drawn by Raeburn Van Buren
Raeburn van Buren
Raeburn Van Buren was an American magazine and comic strip illustrator best known for his work on the syndicated Abbie an' Slats. He was familiarly known in the professional comics community as Ray Van Buren....
. It was distributed by United Feature Syndicate
United Media
United Media is a large editorial column and comic strip newspaper syndication service based in the United States, owned by The E.W. Scripps Company. It syndicates 150 comics and editorial columns worldwide. Its core business is the United Feature Syndicate and the Newspaper Enterprise Association...
.

Abbie an' Slats was Capp's idea; he intended to start a second strip after the success of his popular Li'l Abner
Li'l Abner
Li'l Abner is a satirical American comic strip that appeared in many newspapers in the United States, Canada and Europe, featuring a fictional clan of hillbillies in the impoverished town of Dogpatch, Kentucky. Written and drawn by Al Capp , the strip ran for 43 years, from August 13, 1934 through...
. Instead of drawing it himself, Capp recruited well-established freelance magazine illustrator Van Buren. Initially, Van Buren turned down Capp's offer, but he was lured by the prospect of steady work.

The strip was widely syndicated to 400 newspapers, but it never equalled the popularity of Li'l Abner. Capp abandoned the strip in 1945, turning the writing chores over to his brother Elliot Caplin
Elliot Caplin
Elliott A. Caplin was a comic strip writer best known as the co-creator of The Heart of Juliet Jones. He was the younger brother of Al Capp, creator of Li'l Abner....
. Van Buren continued Abbie an' Slats for 34 years, retiring in 1971. The National Cartoonists Society named him to their Hall of Fame in 1979.

In 1937, the story began with stubborn, street-wise Aubrey Eustace Scrapple, aka Slats, recently orphaned in New York. Arriving by train in a small town of Crabtree Corners, where he was met by his older cousin, the spinster Abigail Scrapple, aka Abbie. Slats joined the household that also included Abbie's sister, the prim and proper Sally. Slats made an enemy of skinflint Jasper Hagstone when he drove into Hagstone's limousine while trying to avoid running over a dog. However, Hagstone's daughter, Judy, became the object of Slats's affection. Later, Becky Groggins became Slats's sweetheart. Becky's father, J. Pierpont "Bathless" Groggins, eventually became the central character of the Sunday strip
Sunday strip
A Sunday strip is a newspaper comic strip format, where comic strips are printed in the Sunday newspaper, usually in a special section called the Sunday comics, and virtually always in color. Some readers called these sections the Sunday funnies...
.

Taking on Andy Sprague as an assistant in 1947, Van Buren continued to draw the strip, and it ended with his retirement in 1971. Van Buren's work from 1954 to 1968 (160 items) is kept at the Syracuse University Library's Special Collections Research Center.

In 1984, Van Buren sent a gift to "Dear Abby" columnist Abigail Van Buren (Pauline Phillips), she wrote back on November 30, 1984, thanking him and then commented on the name similarity:

Yes, I remember our meeting very well. I also recall that every once in a while we'd get our mail mixed up... I at one time (when I first began, I spelled my name "ABBIE"... Then it became even more confusing because of the VAN BUREN... remember?) Abbie and Slats... and the Van Buren. I selected my own name... so perhaps it was an unconscious choice, with you in mind all the while. Be well, Darling One... and stay well. And I hope to heaven you're dangerous!

Most books collecting vintage comic strips suffer a loss in reproduction because clippings from newspapers are the usual source, but two Abbie an' Slats books displayed a higher quality because they were compiled from original proof sheets by publisher Ken Pierce.