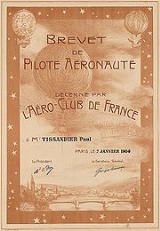 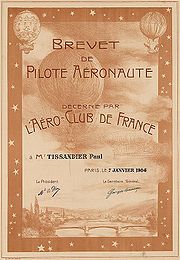 The Aéro-Club de France was founded as the Aéro-Club on 20 October 1898 as a society 'to encourage aerial locomotion' by Ernest Archdeacon
Ernest Archdeacon
Ernest Archdeacon , was a prominent French lawyer of Irish descent who was associated with pioneering aviation in France before the First World War. He made his first balloon flight at the age of 20. He commissioned a copy of the 1902 Wright No. 3 glider but had only limited success...
, Léon Serpollet, Henri de la Valette, Jules Verne
Jules Verne
Jules Gabriel Verne was a French author who pioneered the science fiction genre. He is best known for his novels Twenty Thousand Leagues Under the Sea , A Journey to the Center of the Earth , and Around the World in Eighty Days...
and his wife, André Michelin
André Michelin
André Jules Michelin was aFrench industrialist who, with his brother Édouard , founded the Michelin Tyre Company in 1888 in the French city of Clermont-Ferrand.In 1900, André Michelin published the first Michelin Guide, the purpose of which was to promote tourism by car,...
, Albert de Dion
Albert de Dion
Marquis Jules Félix Philippe Albert de Dion was a pioneer of the automobile industry in France.-His life:...
, Alberto Santos-Dumont
Alberto Santos-Dumont
Alberto Santos-Dumont , was a Brazilian early pioneer of aviation. The heir of a wealthy family of coffee producers, Santos Dumont dedicated himself to science studies in Paris, France, where he spent most of his adult life....
, Henry Deutsch de la Meurthe, and Henry de La Vaulx. On 20 April 1909 its name was changed to Aéro-Club de France.

The Aéro-Club de France originally set many of the regulations that controlled aviation in France. From its formation it also set the rules that have marked some of the 'firsts' in aviation: the first 1 km, the first helicopter flight, and has organised competitions, including:

The club published the journal L'Aérophile
L'Aérophile
L’Aérophile was a French aviation magazine published from 1893 to 1947. It has been described as "the leading aeronautical journal of the world" around 1910.- History and contents :L’Aérophile was founded and run for many years by Georges Besançon...
from 1898 to 1947, and since 1997 publishes the magazine Aérofrance.

After 1945 some of its early regulatory roles were taken by other bodies. It now focusses on the promotion of aviation and certification.

The Club grants the Great Medal of the Aéro-Club de France to individuals who have made outstanding contributions to the advancement of aviation. The winners have been: