In many respects this cartridge parallels the .600 Nitro Express, in that it is essentially a scaled-up version of that cartridge, but is somewhat more powerful, and fires a heavier 1000-grain
Grain (measure)
A grain is a unit of measurement of mass that is nominally based upon the mass of a single seed of a cereal. From the Bronze Age into the Renaissance the average masses of wheat and barley grains were part of the legal definition of units of mass. However, there is no evidence of any country ever...
(64.8 g) bullet. The case itself is a completely new case, not simply another case resized. Double rifles are extremely expensive (many will sell for US $60,000 or much more in 2005 American currency) and have generally been replaced by repeater-rifles using rounds like the .458 Winchester. Single factory loaded .700 Nitro cartridges are available, typically at $100 each, although they have been sold on the internet for as little as $50. .700 Nitro cases, like those of other big bore cartridges, can be hand reloaded
Handloading
Handloading or reloading is the process of loading firearm cartridges or shotgun shells by assembling the individual components , rather than purchasing completely assembled, factory-loaded cartridges...
, drastically reducing the cost - although few users are likely to expend much of this massively-recoiling ammunition.

The typical average muzzle velocity of a factory-loaded cartridge is 2000 ft/s (610 m/s). In the 18 pounds (8.2 kg) rifle used by Accurate Reloading this would result in recoil energy of approximately 160 ft·lbf (216.9 J). This is more than ten times the average recoil from a .308 Winchester
.308 Winchester
The .308 Winchester is a rifle cartridge and is the commercial cartridge upon which the military 7.62x51mm NATO centerfire cartridge is based. The .308 Winchester was introduced in 1952, two years prior to the NATO adoption of the 7.62x51mm NATO T65...
which is a very common hunting calibre, and more than 4 times the recoil of a strong .45-70 Government round. 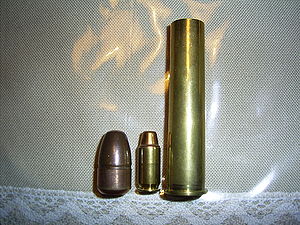 Shoulder-fired rifle calibres comparable to the .700 Nitro Express in terms of power and recoil include the following: