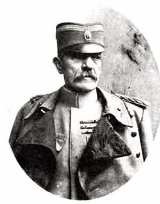 Encyclopedia
Živojin Mišić OKS GCMG  was a Vojvoda (Field Marshal
Field Marshal
Field Marshal is a military rank. Traditionally, it is the highest military rank in an army.-Etymology:The origin of the rank of field marshal dates to the early Middle Ages, originally meaning the keeper of the king's horses , from the time of the early Frankish kings.-Usage and hierarchical...
) and the most successful Serbia
Serbia
Serbia , officially the Republic of Serbia , is a landlocked country located at the crossroads of Central and Southeast Europe, covering the southern part of the Carpathian basin and the central part of the Balkans...
n commander who participated in all Serbia's wars from 1876 to 1918.

Misic's grandfather was born in Struganik near Mionica
Mionica
Mionica is a town and municipality located in the Kolubara District of Serbia. In 2011, the population of the town is 1,571, while population of the municipality is 14,263....
. His parents Radovan and Anđelija (born Damjanović - Koštunjić) had thirteen children, of which only two were girls - Todora and Živana.

Živojin was the youngest child, and when he was born, only eight of his brothers and sisters were still alive. When he turned 6 years, he became a shepherd. He finished primary school in Kragujevac
Kragujevac
Kragujevac is the fourth largest city in Serbia, the main city of the Šumadija region and the administrative centre of Šumadija District. It is situated on the banks of the Lepenica River...
. In his memories, he mentions troubles he had with the city kids that teased him because of his peasant origin. In 1868, he started his gymnasium education in Kragujevac, where he finished 1st, 2nd, and 6th grade. He finished third and fourth grade in Belgrade. In the first five gymnasium grades he was not a particularly good student, but he finished 6th grade with much greater success. Because of that, he was admitted to the Military Academy in 1874, ranked 19th. On every holiday he visited his village, and often he worked on field with his brothers.

He participated with distinction in Serbo-Turkish wars of 1876. and 1878. with the rank of lieutenant
Lieutenant
A lieutenant is a junior commissioned officer in many nations' armed forces. Typically, the rank of lieutenant in naval usage, while still a junior officer rank, is senior to the army rank...
JG of infantry
Infantry
Infantrymen are soldiers who are specifically trained for the role of fighting on foot to engage the enemy face to face and have historically borne the brunt of the casualties of combat in wars. As the oldest branch of combat arms, they are the backbone of armies...
and in Serbo-Bulgarian War
Serbo-Bulgarian War
The Serbo-Bulgarian War was a war between Serbia and Bulgaria that erupted on 14 November 1885 and lasted until 28 November the same year. Final peace was signed on 19 February 1886 in Bucharest...
of 1885. as full lieutenant - a company commander in the 5th infantry regiment of Drinska division.

Sometime after the assassination
May Overthrow
The May Overthrow was a 1903 coup d'état in which the Serbian King Alexander Obrenović and his wife, Queen Draga, were assassinated inside the Royal Palace in Belgrade on the night between 28 and 29 May 1903 by the Julian calendar...
of king Aleksandar Obrenović
Aleksandar Obrenovic
Not to be confused with Alexander I of Yugoslavia.Alexander I or Aleksandar Obrenović was king of Serbia from 1889 to 1903 when he and his wife, Queen Draga, were assassinated by a group of Army officers, led by Colonel Dragutin Dimitrijević-Accession:In 1889 Alexander's father, King Milan,...
he was forced to retire, supposedly through the influence of "Black Hand
Black Hand
Unification or Death , unofficially known as the Black Hand , was a secret military society formed by members of the Serbian army in the Kingdom of Serbia, which was founded on September 6, 1901. It was intent on uniting all of the territories containing significant Serb populations annexed by...
" as he was considered too close to the Obrenović dynasty
House of Obrenovic
The House of Obrenović was a Serbian dynasty that ruled Serbia from 1815 to 1842, and again from 1858 to 1903. They came to power through the leadership of their progenitor Miloš Obrenović in the Second Serbian uprising against the Ottoman Empire, which led to the formation of the Principality of...
, but was reactivated on personal insistence of the Chief of staff of High command of the Serbian army, General Radomir Putnik
Radomir Putnik
Radomir Putnik, also known as Vojvoda Putnik, OSS OCT OKS GCMG was a Serbian Field Marshal and Chief of General Staff in the Balkan Wars and World War I, and took part in all wars that Serbia waged from 1876 to 1917.-Biography:...
who made him his aide.