Encyclopedia
Île Seguin is an island on the Seine
Seine
The Seine is a -long river and an important commercial waterway within the Paris Basin in the north of France. It rises at Saint-Seine near Dijon in northeastern France in the Langres plateau, flowing through Paris and into the English Channel at Le Havre . It is navigable by ocean-going vessels...
river between Boulogne-Billancourt
Boulogne-Billancourt
Boulogne-Billancourt is a commune in the western suburbs of Paris, France. It is located from the centre of Paris. Boulogne-Billancourt is a sub-prefecture of the Hauts-de-Seine department and the seat of the Arrondissement of Boulogne-Billancourt....
and Sèvres
Sèvres
Sèvres is a commune in the southwestern suburbs of Paris, France. It is located from the centre of Paris.The town is known for its porcelain manufacture, the Manufacture nationale de Sèvres, making the famous Sèvres porcelain, as well as being the location of the International Bureau of Weights...
, in the west suburbs of Paris, France.
Île Seguin was home to a Renault
Renault
Renault S.A. is a French automaker producing cars, vans, and in the past, autorail vehicles, trucks, tractors, vans and also buses/coaches. Its alliance with Nissan makes it the world's third largest automaker...
factory, constructed between 1929 and 1934. With 30,000 laborers at its peak, the last car from the Renault production line was a Renault 5 Supercinq
Renault 5
The Renault 5 was first unveiled on 10 December 1971, being launched at the beginning of 1972.The Renault 5 was styled by Michel Boué, who died before the car's release, the R5 featured a steeply sloping rear hatchback and front dashboard...
in 1992. The factory remained dormant until 2005 when all the buildings were demolished. Jean Nouvel
Jean Nouvel
Jean Nouvel is a French architect. Nouvel studied at the École des Beaux-Arts in Paris and was a founding member of Mars 1976 and Syndicat de l'Architecture...
, an architect, is leading a project to turn the island into a cultural hub. 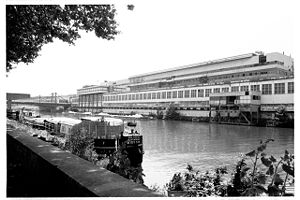