The name Isle de France first appeared in 1387 when the term "France" began to designate territories of the Crown, replacing the pays de France ("pays" means "region/county" as well as "country"). Literally "Island of France", the name was derived from the area's situation with the rivers Seine, Marne, Oise and Beuvronne, which surround it like an island. The name may also inherit from the Frankish
Old Frankish
Old Frankish is an extinct West Germanic language, once spoken by the Franks. It is the parent language of the Franconian languages, of which Dutch and Afrikaans are the most known descendants...
Lidle Franke / Lilde Franke, or, "little France". That is, because the "French"/Frankish kings were bilingual until the 12th or 13th century, the Frankish expression may have evolved when Francia ("Franko/n", "Franke", or "Franchonolant" in Frankish) no longer meant the entire Frankish Empire
Frankish Empire
Francia or Frankia, later also called the Frankish Empire , Frankish Kingdom , Frankish Realm or occasionally Frankland, was the territory inhabited and ruled by the Franks from the 3rd to the 10th century...
but the smaller West Francia, and later the—even smaller—"Pays de France". The expression "Lidle Franke" / "Lilde Franke" may have persisted until the 13th century when locals quit pronouncing the "s" in "isle"; then "Lilde France" lildəfrãntsə would have been difficult to distinguish from l'Île-de-France (IPA: [lildəfrãnsə]).

The area around Paris was the original personal domain of the king of France, as opposed to areas ruled by feudal lords of whom he was the suzerain. This is reflected by divisions such as the Véxin Français and the Véxin Normand, the former being within the King of France's domain, the latter being within the Duke of Normandy
Duke of Normandy
The Duke of Normandy is the title of the reigning monarch of the British Crown Dependancies of the Bailiwick of Guernsey and the Bailiwick of Jersey. The title traces its roots to the Duchy of Normandy . Whether the reigning sovereign is a male or female, they are always titled as the "Duke of...
's fief.


Historic subprovinces of the Île-de-France and their principal cities 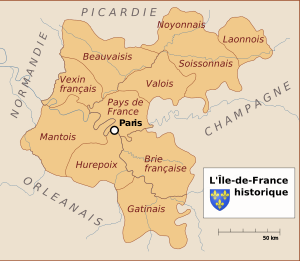