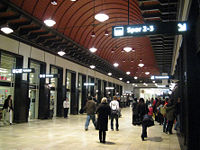 Aarhus Central Station is the main railroad station in the Danish city of Århus.

Serving as the main connecting hub for rail traffic between Aarhus
Aarhus
Aarhus or Århus is the second-largest city in Denmark. The principal port of Denmark, Aarhus is on the east side of the peninsula of Jutland in the geographical center of Denmark...
and rest of Denmark on inter-city rail and commuter rail, the station is used by an average of 6.3 million people per year, making it the busiest train station outside the Copenhagen area
Copenhagen
Copenhagen is the capital and largest city of Denmark, with an urban population of 1,199,224 and a metropolitan population of 1,930,260 . With the completion of the transnational Øresund Bridge in 2000, Copenhagen has become the centre of the increasingly integrating Øresund Region...
.
There are inter-city connections to Aalborg and København H, regional connections to the rest of Jutland
Jutland
Jutland , historically also called Cimbria, is the name of the peninsula that juts out in Northern Europe toward the rest of Scandinavia, forming the mainland part of Denmark. It has the North Sea to its west, Kattegat and Skagerrak to its north, the Baltic Sea to its east, and the Danish–German...
and international trains to Hamburg
Hamburg
-History:The first historic name for the city was, according to Claudius Ptolemy's reports, Treva.But the city takes its modern name, Hamburg, from the first permanent building on the site, a castle whose construction was ordered by the Emperor Charlemagne in AD 808...
, Berlin
Berlin Ostbahnhof
Berlin Ostbahnhof is a mainline railway station in Berlin, Germany. It is in Friedrichshain, now part of Friedrichshain-Kreuzberg district, and has undergone several name changes in its history. It was known as Berlin Hauptbahnhof from 1987 to 1998, a name now applied to Berlin's new central station...
and Prague
Prague
Prague is the capital and largest city of the Czech Republic. Situated in the north-west of the country on the Vltava river, the city is home to about 1.3 million people, while its metropolitan area is estimated to have a population of over 2.3 million...
.

The station is connected to a shopping center with 93 stores and future planning of expansion over the rail yard. The station itself has few stores and large convenience store. There is a big ticket kiosk and the city's central post office is located at the station. In March 2010, McDonald's
McDonald's
McDonald's Corporation is the world's largest chain of hamburger fast food restaurants, serving around 64 million customers daily in 119 countries. Headquartered in the United States, the company began in 1940 as a barbecue restaurant operated by the eponymous Richard and Maurice McDonald; in 1948...
opened a restaurant in the main hall of the station.

The train terminal has a flow of 13 million people per year.

Aarhus Central Station was built in 1927 by the State Rail Company's architect K.T. Seest as a part of a plan of the area around the station.
The source of this article is wikipedia, the free encyclopedia.  The text of this article is licensed under the GFDL.