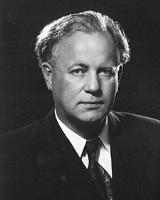 Encyclopedia
Ásgeir Ásgeirsson was the second President of Iceland
Iceland
Iceland , described as the Republic of Iceland, is a Nordic and European island country in the North Atlantic Ocean, on the Mid-Atlantic Ridge. Iceland also refers to the main island of the country, which contains almost all the population and almost all the land area. The country has a population...
, from 1952 to 1968.

Educated as a theologian
Theology
Theology is the systematic and rational study of religion and its influences and of the nature of religious truths, or the learned profession acquired by completing specialized training in religious studies, usually at a university or school of divinity or seminary.-Definition:Augustine of Hippo...
, Ásgeir graduated with honours from the University of Iceland
University of Iceland
The University of Iceland is a public research university in Reykjavík, Iceland, and the country's oldest and largest institution of higher education. Founded in 1911, it has grown steadily from a small civil servants' school to a modern comprehensive university, providing instruction for about...
in Reykjavík
Reykjavík
Reykjavík is the capital and largest city in Iceland.Its latitude at 64°08' N makes it the world's northernmost capital of a sovereign state. It is located in southwestern Iceland, on the southern shore of Faxaflói Bay...
in 1915, but was considered too young to be ordained as a minister. He married Dóra Þórhallsdóttir in 1917. Dóra was the daughter of Þórhallur Bjarnarson, bishop of Iceland 1908–1916. Her brother was Tryggvi Þórhallsson
Tryggvi Þórhallsson
Tryggvi Þórhallsson was Prime Minister of Iceland from 28 August 1927 to 3 June 1932. He was a member of the Progressive Party....
, who was Prime Minister of Iceland
Prime Minister of Iceland
The Prime Minister of Iceland is Iceland's head of government. The prime minister is appointed formally by the President and exercises executive authority along with the cabinet subject to parliamentary support....
1927–1932.

Ásgeir was elected to the Althing
Althing
The Alþingi, anglicised variously as Althing or Althingi, is the national parliament of Iceland. The Althingi is the oldest parliamentary institution in the world still extant...
in 1923 at the age of 29 for the Progressive Party. He spoke as the president of the Althing at Þingvellir
Þingvellir
|Thing]] Fields) is a place in Bláskógabyggð in southwestern Iceland, near the peninsula of Reykjanes and the Hengill volcanic area. Þingvellir is a site of historical, cultural, and geological importance and is one of the most popular tourist destinations in Iceland. It is the site of a rift...
on the occasion of the Althing's 1000th anniversary celebrations in 1930, and became Minister of Finance in 1931 and Prime Minister
Prime Minister of Iceland
The Prime Minister of Iceland is Iceland's head of government. The prime minister is appointed formally by the President and exercises executive authority along with the cabinet subject to parliamentary support....
in 1932. He left the Progressive Party in 1934, but stood for election as an independent for a while until he joined the Social Democratic Party, and remained in the Althing until he was elected president in 1952. From 1938 and until he was elected president he was the director of Útvegsbanki Íslands, an Icelandic bank which later merged with three other banks and became Íslandsbanki (which later became Glitnir
Glitnir (bank)
Glitnir was an international Icelandic bank. It was created by the state-directed merger of the country's three privately held banks - Alþýðubanki , Verzlunarbanki and Iðnaðarbanki - and one failing publicly held bank - Útvegsbanki - to form Íslandsbanki in 1990...
).

Ásgeir was elected the second President of Iceland
President of Iceland
The President of Iceland is Iceland's elected head of state. The president is elected to a four-year term by universal adult suffrage and has limited powers. The president is not the head of government; the Prime Minister of Iceland is the head of government. There have been five presidents since...
in a closely contested election in 1952, which had been called upon early due to the death of Sveinn Björnsson
Sveinn Björnsson
Sveinn Björnsson , son of Björn Jónsson and Elísabet Sveinsdóttir, was the first President of the Republic of Iceland.He became a member of Reykjavík town council in 1912 and was its president during 1918–1920....
, Iceland's first president. Ásgeir's main opponent, Bjarni Jónsson, minister in the Reykjavík Cathedral, had the endorsement of the governing parties in Iceland, the Independence Party and the Progressive Party. Still Ásgeir managed to receive 46.7% of the vote, compared to Bjarni's 44.1%. The third candidate, Gísli Sveinsson, a former MP for the Independence Party, got 6.0%.

Ásgeir was re-elected unopposed in 1956, 1960, and 1964. Shortly after his fourth term started, his wife, Dóra, died from leukemia. In 1968 Ásgeir decided not to seek re-election. It was widely expected that his son-in-law, Gunnar Thoroddsen
Gunnar Thoroddsen
Gunnar Thoroddsen was Prime Minister of Iceland from 8 February 1980 to 26 May 1983. Gunnar is the youngest man ever elected to the Althing, Iceland's Parliament. He was 23 years old when he was elected as MP in 1934. He served as an Ambassador of Iceland in Denmark from 1965 to 1969 when he ran...
would be elected as his successor, but starting as the frontrunner according to opinion polls, he lost his ground to Kristján Eldjárn
Kristján Eldjárn
Dr. Kristján Eldjárn was the third President of Iceland, from 1968 to 1980.His parents were Þórarinn Kr. Eldjárn, a teacher in Tjörn, and Sigrún Sigurhjartardóttir. He graduated in archaeology from the University of Copenhagen and taught at the University of Iceland...
.

In 1955, Ásgeir was awarded the Grand Cross Special Class of the Order of Merit of the Federal Republic of Germany (Sonderstufe des Großkreuzes des Verdienstordens der Bundesrepublik Deutschland).
The source of this article is wikipedia, the free encyclopedia.  The text of this article is licensed under the GFDL.