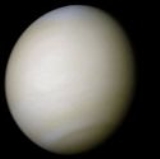 1959    14:28 UT Venus occults the star Regulus. This rare event is used to determine the diameter of Venus and the structure of the Venusian atmosphere.

1961    Venera program: ''Venera 1'' becomes the first man-made object to fly-by another planet by passing Venus (the probe had lost contact with Earth a month earlier and did not send back any data).

1962    The Mariner 2 unmanned space mission is launched to Venus by NASA.

1965    Venera program: The Soviet Union launches the Venera 3 space probe toward Venus, the first spacecraft to reach the surface of another planet.

1967    The Soviet probe Venera 4 reaches Venus and becomes the first spacecraft to measure the atmosphere of another planet.

1969    Venera program: Soviet ''Venera 6'' begins its descent into the atmosphere of Venus, sending back atmospheric data before being crushed by pressure.

1970    Venera Program: Venera 7 launched. It will later become the first spacecraft to successfully transmit data from the surface of another planet (Venus).

1994    NASA loses radio contact with the Magellan spacecraft as the probe descends into the thick atmosphere of Venus (the spacecraft presumably burned up in the atmosphere).