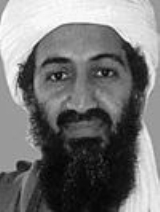 1996    Osama bin Laden issues message entitled 'A declaration of war against the Americans occupying the land of the two holy places.'

1998    Osama bin Laden publishes a fatwa declaring jihad against all Jews and "Crusaders"; the latter term is commonly interpreted to refer to the people of Europe and the United States.

1998    A court in Taliban-controlled Afghanistan declares accused terrorist Osama bin Laden "a man without a sin" in regard to the 1998 U.S. embassy bombings in Kenya and Tanzania.

2002    The UN Security Council unanimously establishes an arms embargo and the freezing of assets of Osama bin Laden, Al-Qaida, and the remaining members of the Taliban.

2004    The Arabic news network Al Jazeera broadcasts an excerpt from a video of Osama bin Laden in which the terrorist leader first admits direct responsibility for the September 11, 2001 attacks and references the 2004 U.S. presidential election.